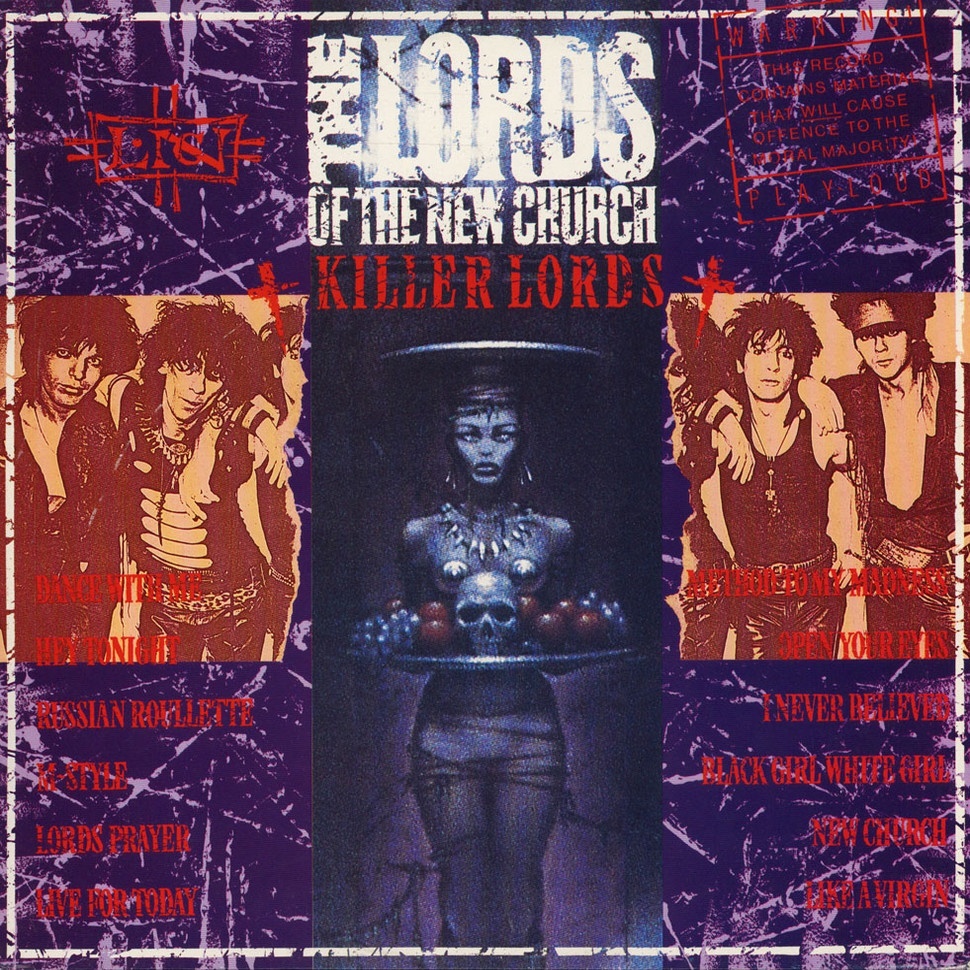 It’s rare that a supergroup is more than the sum of its parts; on very fortunate occasions (Traveling Wilburys come to mind), a supergroup manages to release songs of classic value and resonance. Killer Lords, a 1985 best-of selection from punk-goth supergroup Lords of the New Church’s three full-length studio releases, makes clear that when they were good, the Lords were very, very good. And when they were bad, they were boring.

Stiv Bators, the singer from the Dead Boys, a Cleveland punk band of violent reputation and modest success, and Brian James, a guitarist from the Damned, had met when the former’s band was opening for the latter’s. After some false starts at forming a band, they hooked up with Dave Tregunna, bass player from Sham 69, and Nicky Turner, drummer from the Barracudas, to create the Lords of the New Church in 1981. Bators and James would play and write together throughout the eight-year tenure of the Lords; drummers and bass players came and went.

Killer Lords collects most of the Lords’ singles alongside “Like a Virgin,” the amusing, even silly Madonna cover they’d released as a standalone single earlier the same year, and two previously unreleased tracks, a cover of Creedence’s “Hey Tonight” and one of their finest tunes, “Lords Prayer,” which had been written by T.V. Smith (The Adverts) and offered to the Lords.

Though the Damned would have presaged skilled guitar, there had been little hint in the Dead Boys oeuvre of the haunting vocals Bators would bring to the Lords. He shines on “Lords Prayer,” his voice rough and pleading. “There’s no saviour out there/ There ain’t no one else who cares/ Don’t look to me for absolution/ There ain’t no clandestine solution/ Life’s a crime of passion/ Designed for direct action,” he warns his audience. The song’s nuanced message, touching on themes of an abstracted god, individual and social responsibility, sit well next to the organ intro and church-bell punctuation, and there’s good balance between the organ, ‘80s synth riff and deft guitar. The song climaxes at Bators’ cry, as the voice of God: “I ain’t comin’ — save yourself!” It’s one of the strongest songs the Lords ever recorded, and it holds up well even after 35 years.

It’s not clear why the Lords decided to record “Hey Tonight,” where they add little to a droning, mostly two-chord four-note snoozer. Likewise, “Black Girl White Girl” is a skipper, its lyrics effortfully offensive on top of do-nothing music that fails to engage. “New Church” is repetitive and tiring at best. They sit between better singles like “Dance With Me,” “M-Style” and “Russian Roulette,” competently executed and catchy, that maintain the upbeat-minor-key mood that permeates much of the album. (A 1993 re-release adds another seven mostly-mediocre tracks.)

But besides “Lords Prayer,” there are several other tunes for the ages on Killer Lords. Like many punk covers of earlier songs (e.g. Japan’s cover of “Don’t Rain on My Parade” or the Sex Pistols cover of “My Way”), the Lords’ cover of the Grass Roots’ “Let’s Live for Today” (credited as “Live for Today”) puts a new spin on the song’s message. The Grass Roots light-heartedly urge us to play and love now, not getting caught up in jobs or worries. The Lords exhort us to grasp what little we may hold, for life is dark and death is certain. Bators’ voice and Matt Black’s synth-organ assure that the Lords’ version is the one that will come crawling into our most unnerved three-a.m. thoughts.

With “Open Your Eyes,” written by Bators and James, the Lords have an anthemic punk chant, railing against sheep dozing in front of their television sets, believing whatever they’re told. “The television cannot lie/ Controlling media with smokescreen eyes/ Nuclear politicians picture show/ The acting’s lousy but the blind don’t know.” The lyrics are a little heavy-handed, but the sentiment is evergreen. A horn section (punk sax player Steve ‘Rudi’ Johnson and trumpet player Simon Lloyd of Icehouse) adds brightness, and the song’s wraparound throb will have the listener shaking their fist with the music.

“Open Your Eyes” leads directly into the loveliest song on the album, the heart-wrenching “I Never Believed,” another Bators/James original. The beauty of the song is partly the contrast between James’ bell-like guitar riff & Bators’ vocals at their most soulful, partly the poetic lyrics, the drama familiar to anyone who’s ever been caught surprised by a breakup: “I turn to catch a dying shadow/ Your faded image a-haunting me/ I slash my eyes out in a Buñuel mood/ I cannot see you in someone else’s dream/ I never believed it could happen to me…” Just before the last verse, a brief, bridging guitar solo screams out with all the agony that Bators is holding back. “Sometimes heaven helps the wicked,” he muses. A synth pad in the background fills out the sound with delicate distance.

After a career full of dangerous stage antics, injuries and violence, Bators died in 1990 of traumatic brain injury after being struck by a car in Paris. The Lords had broken up the previous year. James and Tregunna’s attempt to reform the Lords in 2002 with a new singer disintegrated. The magic of the Bators/James songwriting partnership could not be reignited. But we are left with Killer Lords, with its fistful of transcendent punk ballads and gothic anthems: like its creators mournful, poignant, defiant and star-crossed.

Dave Alvin: From an Old Guitar – Rare and Unreleased Recordings

It’s true that albums of “leftovers” often under-deliver, and it would be easy to come at …