In 1990, Kevin Costner directed, produced and starred in Dances with Wolves, earning critical admiration and two Oscars. Two years later, Clint Eastwood would also earn an Oscar for Unforgiven, the anti-Western that he directed, produced and starred in. While these two films are considered tentpoles of early ‘90s cinema, Barbra Streisand pulled off a similar victory in the intervening year with her adaption of The Prince of Tides (1991). Yet her achievement doesn’t receive the same reverence among the triumphs of the era.

Adapting the film from Pat Conroy’s wildly successful 1986 novel of the same name, Streisand struggled for nearly four years to get her vision onto the screen. While studios greenlit similar passion projects by her male counterparts, Streisand did not initially receive the funding she needed to turn Conroy’s 700-page tome into the epic she had envisioned. Streisand, who had been a leading lady and popular singer since the ‘60s, had already directed/produced/starred in Yentl (1983), proving that she had the chops to take on The Prince of Tides. Yet the studio wanted to spend less, especially when the highest grossing films of 1989 starred Harrison Ford, Mel Gibson, Jack Nicholson and Tom Cruise (admittedly, in a character study that featured no explosions).

Even with Streisand’s star power, The Prince of Tides was a tough sell: a character study about an emotionally-scarred man coming to grips with the ghosts of his past. Starring Nick Nolte as a football coach from South Carolina and his relationship with a Jewish therapist in New York City (Streisand), The Prince of Tides wasn’t the type of film that didn’t seem like a surefire box office hit. It’s complex and rich and the outlier when held up against the other Best Picture nominees of its class: a spastic re-examination of the Kennedy assassination, a Disney cartoon fantasia, a bloated biopic and an audacious thriller featuring a cannibal who liked to eat his victims with fine Italian wines. 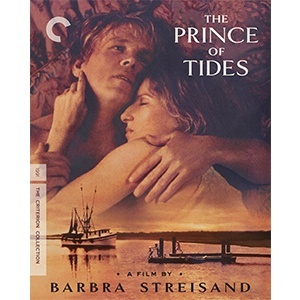 The movie begins when Tom Wingo (Nolte) learns that his sister has attempted suicide in Manhattan. His marriage to Sallie (Blythe Danner) is on the rocks and at the urging of his estranged mother, Tom goes north to care for Savannah (Melinda). There, he meets his sister’s therapist, Dr. Susan Lowenstein (Streisand), a no-nonsense New Yorker married to a world-famous violinist (Jeroen Krabbé). Lowenstein forces Tom to explore the traumas of his past as they both fall in love.

Streisand evocatively captures two distinct settings in her film. Her South Carolina is a place of lush marsh, shrimping boats, lonely seascapes and sweaty cruelty. Meanwhile, New York City unfurls in a panoply of honking cars, elegant restaurants, walkable neighborhoods and claustrophobic quarters. Tom begins the movie hating the city and soon adapts as he stays on, partially to help Savannah and partially because Sallie admits to an affair and he doesn’t know whether he should return home.

Nolte gives a career-best performance as the suffering Tom. Cast mainly in comedies and action films prior, Nolte is believable and nuanced as The Prince of Tides marches towards Tom’s dark secret. Streisand, on the other hand, does not possess the same range but matches Nolte’s wild energy with her more tightly-wound take on Lowenstein. The role, a Jewish New Yorker, feels tailored to Streisand’s strengths. But her character doesn’t have it easy either. The doctor is also in a difficult marriage and finds solace in the brash Southerner.

Running more than two hours, The Prince of Tides suffers when not focusing on Tom and Lowenstein. There are Hollywood flourishes of treacle that have not aged well, taking away from the unspoken trauma at the story’s center. Krabbé’s character, Lowenstein’s vain and cruel husband, has no depth and feels like a villain plucked from Die Hard or some other Eurotrash central casting call. And the sequences involving Tom training Lowenstein’s teenage son, Bernard, to be a better football player feel telegraphed in from a bad ‘80s comedy. Making matters worse, Bernard is played by Jason Gould (Streisand’s son with Elliott Gould) who was well into his 20s while filming and whose performance grinds the film to a halt whenever he appears.

There are many elements that make The Prince of Tides still watchable today. And yes, Dances with Wolves also suffers from similar excess. Yet, for a film dealing with trauma, there is a certain sunniness that betrays the gravitas of the subject matter, especially George Carlin as comic relief in the form of Savannah’s gay neighbor. Worst of all, James Newton Howard’s sappy score makes everything all feel so damned sentimental. If you are able to look past the excess of the era, there are some really strong moments and The Prince of Tides remains important as the wellspring of a woman director/star who held her ground against the boys club of the Hollywood system and ultimately came out on top.