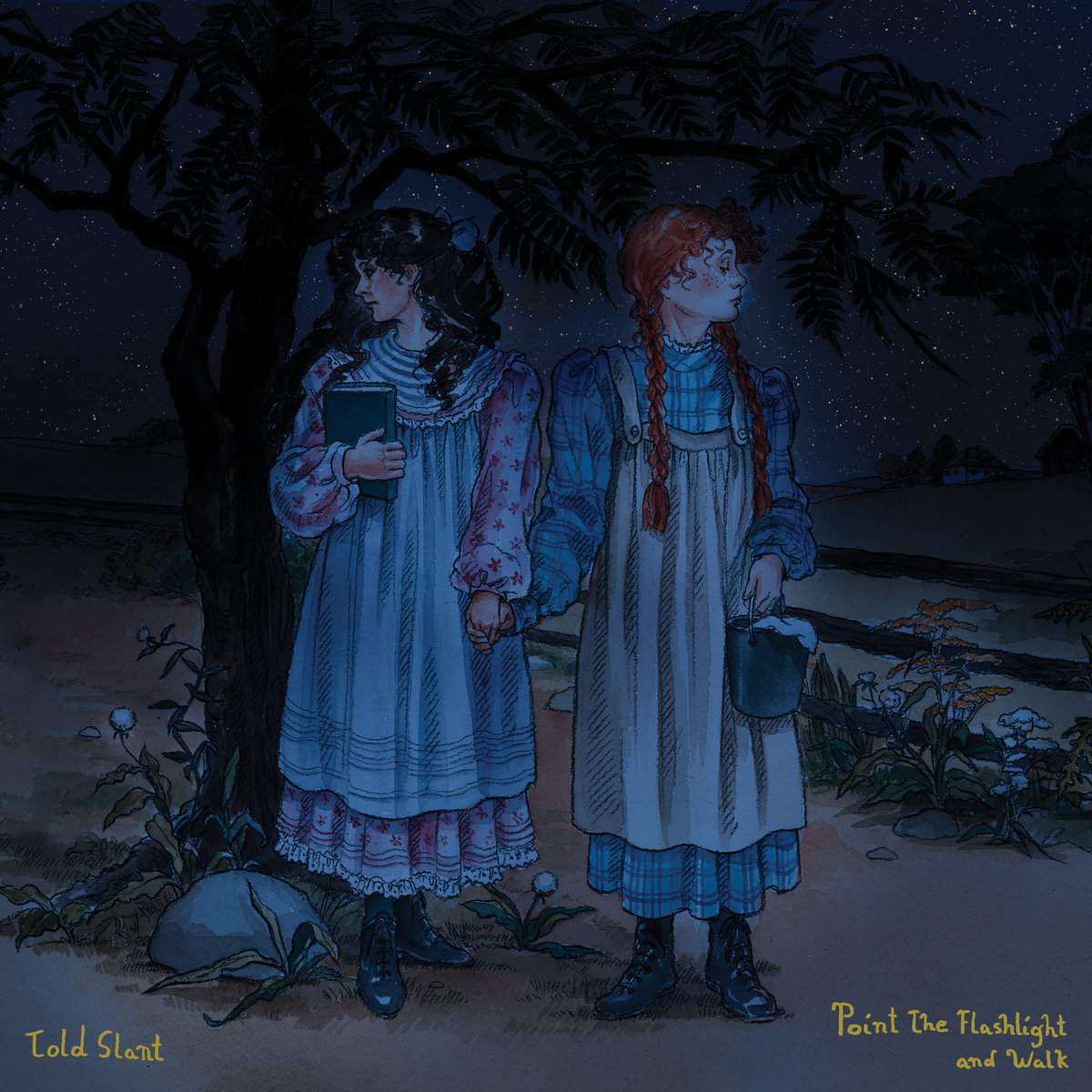 Oftentimes, reverence is accompanied by imbalance. Imagine a pan scale: on one side, the hanging chain is strained, taut from the pull of a heavy weight, forcing the pan to sink lower and lower. Meanwhile, the other side of the fulcrum is unchanged, weightless. This unequal partnership is the very essence of Point the Flashlight and Walk, the third—and most accomplished—album from Brooklyn’s Told Slant.

Flashlight‘s rather downtrodden leitmotif should come as no surprise given songwriter Felix Walworth’s track record. Both 2012’s Still Water and 2016’s Going By are relatively lo-fi albums, coded with thrashing drums and Walworth’s signature: a gut-punching, lachrymose timbre that always seems to be on the verge of either weeping or screaming. This distinctive voice has soundtracked Walworth’s two prior albums, each entwined with disparaging vignettes of loss, dysphoria, self-doubt and, of course, heartbreak.
This is something special about Walworth: their ability to paint a tableau that feels uncomfortably familiar. Traveling with just a flashlight— and “No backpack on”—Walworth voyages down an uncertain road, taking long car rides with their dad, and reminiscing about childhood innocence. It all leads up to form a sort of parable for their decaying relationship. But, like most fables, at first glance Flashlight feels sublime, pastoral even—especially, considering Walworth’s new indie-folk ensemble of banjos, harp and a consistently sweet acoustic rhythm. Yet, Walworth soon recognizes the self-sacrifices they had to make to uphold this happy veneer are not worth it. They recognize, finally, the imbalance in the relationship. Thus, it’s time to even the scale, or better yet, remove the weight all together.

Walworth’s pilgrimage begins with “Meet You in the City,” one of the album’s highlights. Subdued synths, and twinkling keys float over the track as Walworth sets a precedent for what kind of relationship we’re dealing with: “It doesn’t matter if you take me away/ Used to look at my body and say/ It doesn’t matter if they treat you this way.” It’s clear here: Walworth comes second in the relationship. “Meet You in the City” then fades nicely into the next track, “Bullfrog Choirs.” With their “flashlight drawn,” Walworth amps up the energy a bit: a charging rhythm is accompanied by unrestricted harmonies and gritty drums—a Told Slant trademark—until airy synths blend with a vibrating midi beat and Walwroth wonders: “For the rest of my life will I gnaw at this bone?/ That I am always alone.”

Among many distinctive Told Slant proclivities—their warbling voice and trouncing drums—their songs tend to include repeated couplets—or tercets if we’re being technical—that become an almost sacred mantra. Take “Flashlight On,” for example. Sitting with their lover with the “windows down in the van,” and listening to music with a “headphone splitter,” Walworth realizes “I’ve spent so much of my life with no passion at all.” So, they decided to “exchange emptiness” with their lover and look to them for guidance. Over and over they repeat: “Point the flashlight and walk.” “Run Around the School” is similar in this way. Steady drums and a bright banjo riff underscore Walworth’s realization that their relationship is almost like childlike infatuation. With this understanding, Walworth repeats: “I think of you/ Run around the school/ I’m telling everyone.”

However, the relationship soon falls apart, and Walworth is now left wondering what that means for them. On one of the folksiest tracks, “Family Still,” Walworth is trying to convince themself that, even if they don’t talk to their ex, and although their dad still listens to their lover’s music while he’s driving, they still “don’t need your love at all.” At the end, the song picks up speed—perhaps mirroring Walworth’s growing strength and independence—as synths are now introduced, cymbals crash and soon we’re in “No Backpack.” But, this resolution isn’t as easy as they make it seem. On, “From the Roofbeams” they wonder “I can I can I? Can I can I? Can I/ Stop loving you?” Maybe. Or maybe not, as they admit in the final two lines: “So I’ll stay with you, stay with you, even when it’s scary to/ Take all these cannon drum, heaven trumpet feelings that I have for you.” After a brief break from the relationship—a break which, hopefully, helped Walworth understand functioned more as dependency than a partnership—the two seem to be back on course. One can only hope that this time around things might be slightly different, slightly more equal.

Although Point the Flashlight and Walk sounds like the sleepy directions you would give a camper who is looking for a bathroom to piss in, this is a Told Slant album, and as always, it’s full of emotional catharsis. But Flashlight is more dynamic and nuanced than prior albums. The varied, but bright production, adds a joyous tinge to a rather dark allegory. With that, there is no doubt that Point the Flashlight and Walk is Told Slant’s best release to date.

The EP refuses to read as a naive “we’re gonna get through this just fine” narrative, but …