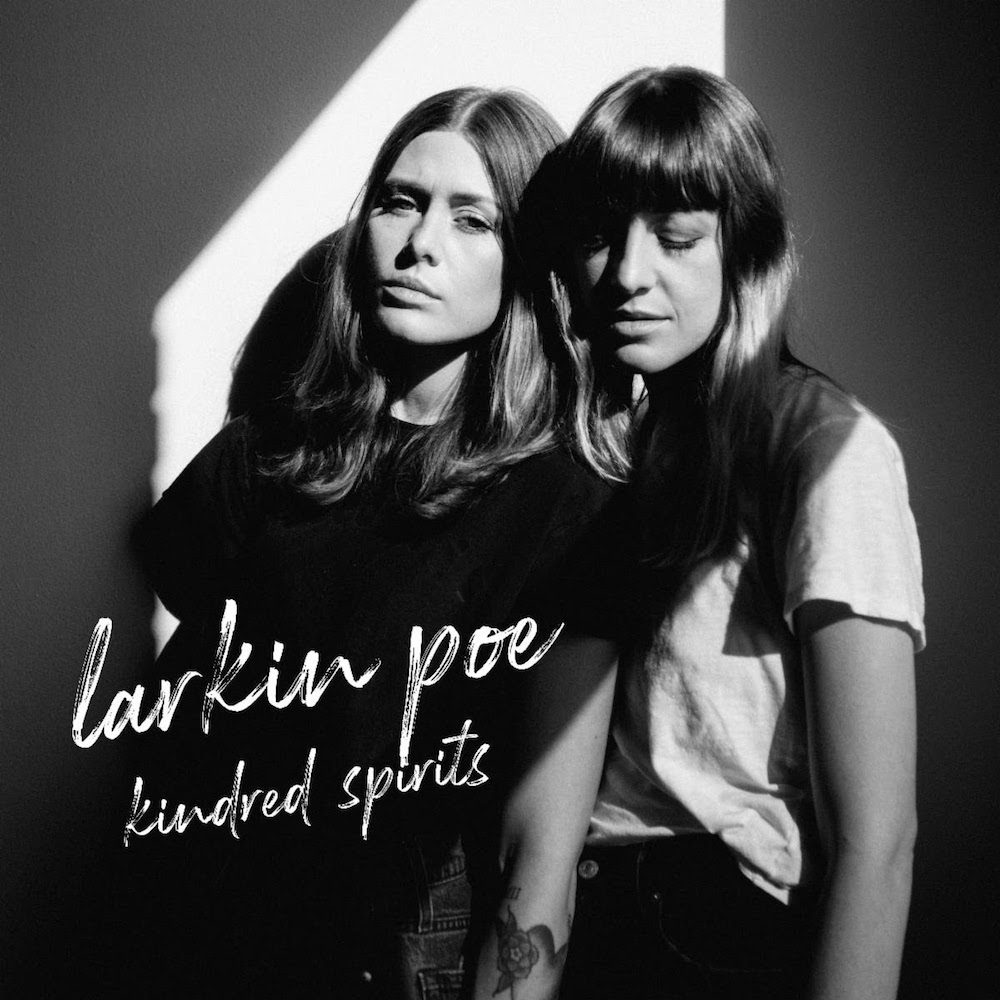 Listening to Megan Lovell play lap steel guitar it becomes obvious the woman is a six-string monster, which is actually what makes Larkin Poe’s Kindred Spirits such a disappointment. Don’t get me wrong, her playing is nothing short of incendiary and Rebecca Lovell’s singing can be eye-opening. It’s just that the song selection on this disc is questionable. There are some missteps and at least one blunder of epic proportions.

Megan and her singing sister Rebecca have been on the road since they were 16 and 17, so they know their way around a song and a stage. Yet problems begin with the first track, Robert Johnson’s “Hellhound on my Trail.” If ever a song was built to establish Larkin Poe’s blues credentials that would be the one. Yet rather than actually playing the song, they do 40-seconds and call it a day.

Groaning and growling, “Fly Away” (a Lenny Kravitz cover) heads down trails the hellhound might have taken, establishing these two can play. Megan’s guitar moans with a menace that makes this flight a total escape from reality. Their wings have not been clipped and they are ready to soar at a moment’s notice.

Taken at a funereal pace, Neil Young’s “Rockin’ in the Free World” establishes the connections between the world of 1989 and 2020. Completely different and exactly the same, the pain of people living without the essentials needed for a productive life becomes crystal clear. Hurt slowly resonates from every string.

The daring continues with “(You’re the) Devil in Disguise.” Their performance is so far from Elvis Presley you’re almost shocked when you realize this is in fact one of his biggest hits. In the capable hands of the Lovells this song has been totally transformed. It haunts you how much the song has been changed just by slowing it down and playing it in a minor key. It chills in ways the authors never intended.

Right about now you’re asking yourself, “So what’s the problem?” First, there’s “In the Air Tonight.” As Phil Collins’ tracks go it’s one of his best, but as an acoustic cover it seems to lose all the power it had. It’s not bad, it’s just not good either. The slide continues with “Nights in White Satin.” While the Moody Blues had a bit of a blues background, by the time they got to this song those days were long gone. No matter how hard the Lovells try, this song is never gonna fit the blues bill.

Bo Diddley seems like a perfect fit for Larkin Poe. “Who Do You Love” is one of those songs that allows you to get down and dirty, but they play it too sweet. It lacks grit. Instead of growling with blood-thirsty passion, it sounds like a blues band performing for prom. “Take What You Want” (Post Malone) gets stripped back to the basics. All the better for it, I still can’t help feeling that it still needs to be a lot louder.

The Allman Brothers were the classic southern rock band. Nobody else came close, so choosing to cover “Ramblin’ Man” takes a lot of brass. To be honest, the two sisters do a fairly reputable version, but there simply isn’t enough fire. On the other hand, the stripped-down treatment of “Bell Bottom Blues” gives Derek & the Dominoes a run for their money. Sung with feeling, played with emotion, it’s everything you could hope for.

Following hot on the heels of Self Made Man, Kindred Spirits lacks the oompf that’s at the heart of Larkin Poe’s best work.