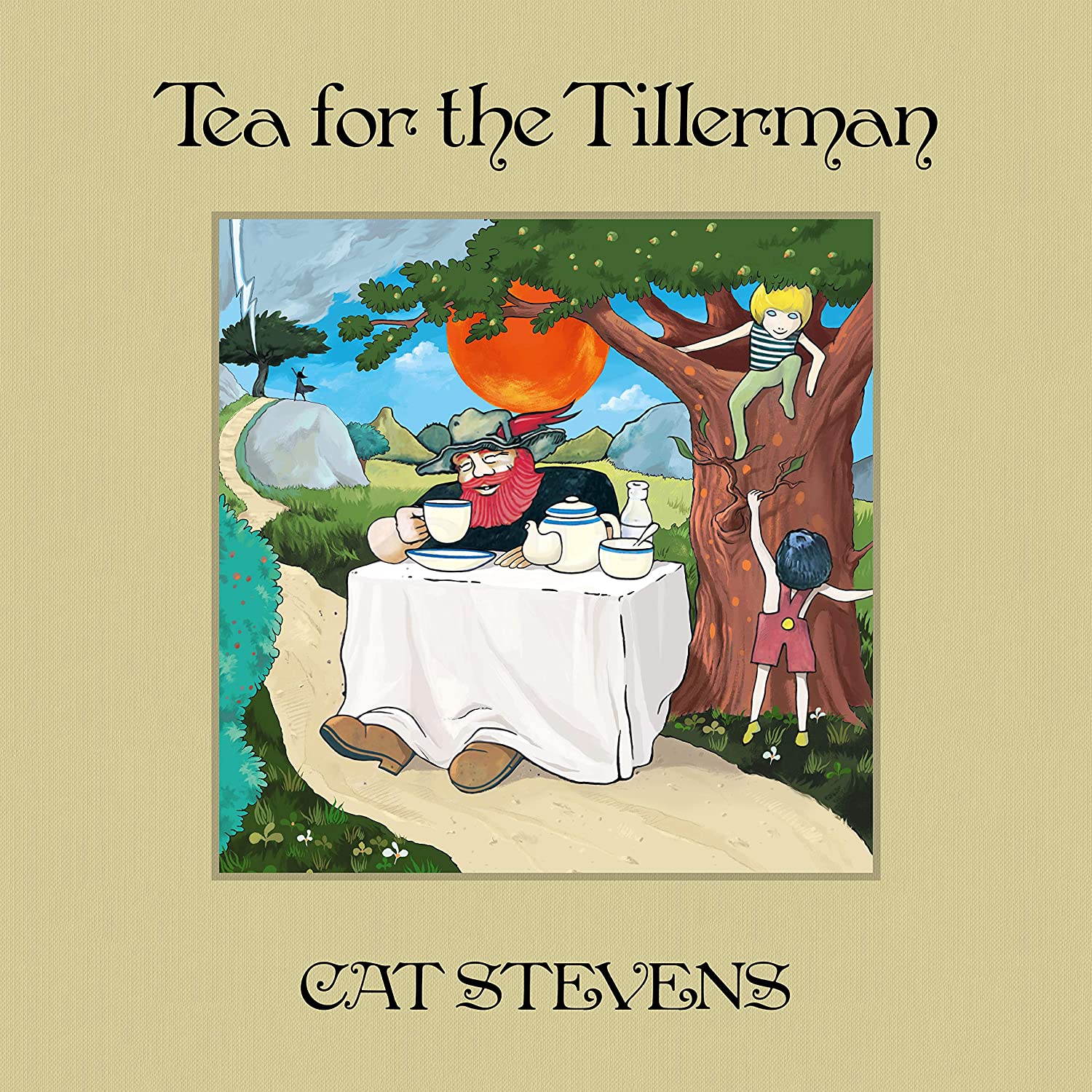 In light of some recent reappraisals of the term “dad rock,” perhaps it’s time we add Yusuf – the artist formerly known as Cat Stevens – to the dad rock canon. This is a sincere statement. Objectively more stimulating than the Eagles, easier to relate to than Aerosmith, and (arguably) less controversial than Eric Clapton, Yusuf has sold millions of albums, yet he’s less of an oldies radio mainstay than many of his contemporaries. He’s written a few songs that have left a lasting imprint on popular culture – “Father and Son” soundtracked a pivotal parental moment in Guardians of the Galaxy Vol. 2, while Mandy Moore loves “Moonshadow” so much that (in an instance of art imitating life) her character has sung it on This Is Us—and it’s a near-guarantee that any record store with a used vinyl section will have at least one copy of Teaser and the Firecat. But that copy will almost certainly stay there, whereas used copies of Neil Young’s Harvest or Fleetwood Mac’s Rumours are much harder to come by. As strange as it is to say about a man with multiple RIAA-certified platinum records, and multiple multiple-platinum records, Yusuf feels like something of a cult artist in 2020.

While it’s quite unlikely that these 50th anniversary reissues of Mona Bone Jakon and Tea for the Tillerman will introduce a new generation of listeners to his music, they do offer us a chance to revisit these songs and rediscover why so many of us fell in love with them to begin with. But before you reach for your wallet, consider just how deeply you fell in love with them: In addition to remastered CDs and vinyl LPs, these albums are also being reissued in double-disc deluxe editions, collecting demos and live recordings cherry-picked from the massive “Super Deluxe Edition” box sets—the last of which includes CDs, LPs and a Blu-Ray disc of live performances and will only be of interest to the most faithfully devoted.

Yusuf was only a few years into his musical career when he recorded Mona Bone Jakon in the early 1970s, but by then he had already undergone a number of personal and professional changes. His 1967 debut Matthew and Son offered a mix of folk rock and orchestrated pop that yielded a few hit singles and turned its creator into a teenage star – he even toured with Jimi Hendrix and Englebert Humperdinck shortly after its release. However, the album that followed several months later, New Masters, flopped hard, and Yusuf was displeased with its overproduced sound. Then, a year later, Yusuf became so severely ill with tuberculosis that his lung collapsed, requiring months in the hospital and even longer on bedrest to recover. During his convalescence, Yusuf parted ways with his old label, Deram Records, and signed with Island Records, which was more receptive to the singer-songwriter direction he wished to take.

As with his onetime Deram labelmate David Bowie, Yusuf’s third album sounds like the work of an entirely new artist. Mona Bone Jakon features only a few baroque flourishes – a decorous flute accompaniment played by Peter Gabriel on the feathery “Katmandu,” an electric organ on “I Think I See the Light” that could’ve been nicked from a Doors record, string arrangements on “Maybe You’re Right” and “Lilywhite”. Otherwise, it’s a collection of songs that’s very typical of the contemporary British folk rock scene, featuring jaunty guitar-and-piano numbers (“I Think I See the Light,” “I Wish, I Wish”) and acoustic laments (“Trouble,” “Fill My Eyes”). There are a few goofier moments that don’t quite land; “Pop Star,” for example, attempts to send up the shallowness of celebrity, but its lyrical progression from “I’m gonna be a pop star” to “I’m going on the TV now” to “I’m coming, coming, coming home now” itself feels shallow, while the title track is a bluesy dick joke that’s probably a lot funnier if you’re Yusuf. And sure, the breakup ballad “Lady D’Arbanville” is a bit melodramatic in comparing the singer’s heartbreak to the literal death of his lost love, but the acoustic guitars have something of a flamenco-tinged sound, and Yusuf’s singing is versatile and expressive. It’s that voice – cracked and impassioned – that elevates “Trouble” to something of a standard, filling Yusuf’s words with an anguish that many of its covers lacked. When he sings “I’ve seen your eyes/ And I can see death’s disguise/ Hangin’ on me,” he sounds like someone who’s been close to death.

Death does not loom so large over Tea for the Tillerman – Yusuf’s second album of 1970 and his most beloved work – which instead reckons with life and the existential questions that only seem to get harder to answer as you go through it. “Wild World” and “Sad Lisa” sound like (patronizing) love songs, and you can hear them that way, but if you scratch beneath the surface you’ll hear Yusuf singing to himself in character, trying to calm his own anxieties. (“I say it’s Lisa but I suppose basically I’m talking about myself on [‘Sad Lisa’],” he told CREEM in 1971.) Mostly, however, Tea for the Tillerman is about the search for deeper meaning in a society that values productivity and materialism above all else. Yusuf leaves behind the comforts of the modern world—planes and trains, highways and skyscrapers—on “Where Do the Children Play?” in search of spiritual enlightenment on “Miles from Nowhere” and “On the Road to Find Out.” (That said, it’s very easy to imagine listeners at the time hearing Yusuf asking “Will you tell us when to live/ Will you tell us when to die?” on “Where Do the Children Play?” as a commentary on the Vietnam War.) The cracks that form on “But I Might Die Tonight” as the young Yusuf pushes back against society’s expectations of him – “Work hard boy and you’ll find/ One day you’ll have a job like mine” – erupt into fissures on the family drama of “Father and Son,” a song made all the more moving by Yusuf’s singing the son’s lines in a higher register than the father’s.

Instrumentally, Tea for the Tillerman swings back to the fuller sound of Yusuf’s first two albums, using pianos and string arrangements to fill out these songs without burying them under piles of orchestral overdubs. It isn’t quite timeless, but it doesn’t exactly feel fixed in its time, either. In fact, Yusuf’s decision to re-record the album nearly 50 years later underscores how well its sound has held up. Tea for the Tillerman 2 – which is included in the Tea for the Tillerman box set but was released on its own back in September – fleshes out the original’s musical palette with harpsichords, synthetic horns and Ghanaian percussion; there’s also the matter of Yusuf’s voice, which shows his age but also his sincerity. These additions are pleasant and unfussy, but ultimately conservative, though there are some exceptions. “Wild World” is reimagined as a nuevo tango while “On the Road to Find Out” splits the difference between blues and folk; the rapper Brother Ali even pops up on “Longer Boats” to contribute a verse. The best song here, by far, is “Father and Son,” in which Yusuf sings a duet with his younger self, turning the passage of time into something more poignant than any instrument can convey. It’s moments like these that keep Tea for the Tillerman 2 from feeling superfluous, like a folk-rock version of the “Special Editions” of the Star Wars trilogy.

What does feel superfluous about these reissues is nearly everything else. Both the Mona Bone Jakon and the Tea for the Tillerman box set include not just a remastered version of the album but a “2020 Mix,” which for both records sound like note-for-note re-recordings of the original instrumentals. Which begs the question: Why? Why does one need two versions of the same album that, to all but the most obsessive listeners, will sound nearly identical? Only slightly better are the demos and the live recordings, which more or less sound exactly like what you think demos and live recordings of these songs will sound like. At least the Tea for the Tillerman “Super Deluxe Edition” offers eight completely new songs, like “Can This Be Love?” and the bouncy Elton John duet “Honey Man” – but those are the only two new songs to appear on the plain old deluxe edition, leaving you to decide if it’s worth purchasing the full Monty for the admittedly excellent “Love Lives in the Sky” and “I’ve Got a Thing About Seeing My Grandson Grow Old.” Let’s just put it this way: If your dad grew up listening to Yusuf and still refers to him as Cat Stevens, and you haven’t bought him a Christmas or Hanukkah present yet, he’s almost certainly going to cherish these box sets – but it’d be a better use of your money to buy him tickets for the next Yusuf concert when it’s finally safe to go see live music again.