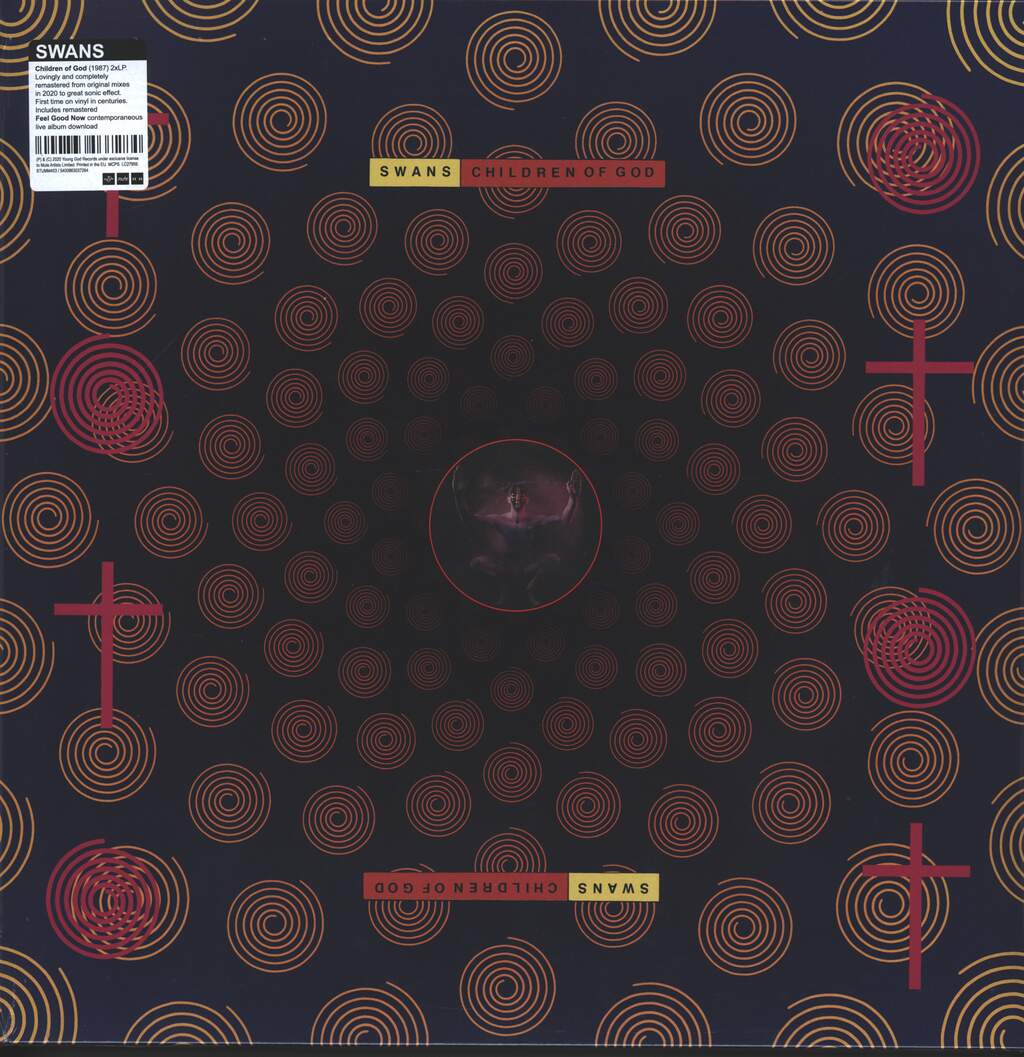 By the time Swans got ready to record their fifth album, Michael Gira had taken his post-no-wave sound about as far as it could go. Filth and Cop were savage classics of total negation, anti-rock noise that wielded guitars like hammers and lyrics that read more like the screams of the damned. But the twosome of Greed and Holy Money found the frontman attempting to change up the band’s style, adding elements like acoustic guitars here and there and wrangling his howls into something approaching actual singing. These companion albums, slightly underbaked (two of the latter’s seven tracks were simply different versions of songs on Greed), bore fruit on Children of God, the moment that Swans proved it was more than a vessel for noise. On it, Gira consciously sought to expand the group’s palette, forgoing his usual lyrical impressionism of freeform malaise and debasement for a specific subject (religion and its ecstatic expressions both biblical and televised), as well as truly shaking up the band’s sonic boundaries.

Not coincidentally, this marked the first album in which keyboardist and vocalist Jarboe graduated from featured guest to full band member and contributor. Jarboe, not unlike what Brix Smith did for the Fall, appeared to bring a mollifying presence to Swans’ ferocious clanging. Where Smith brought pop sensibilities to her husband’s garage rock repetition, though, Jarboe infused Swans’ hurricane of noise with experimental gothic calm that lowered the volume but retained all the darkness of Gira’s bleak worldview. Her bolstered presence is obvious even on the loud, metallic opener “New Mind,” where her keyboard fills add menace to a guitar riff that in and of itself shows more compositional professionalism that previous Swans records, in which it sounded like guitars were slowly toppling down concrete stairwells. Yet it is in the slide from this song’s industrial grind into the stunningly open, soft bass-and-keys soundscape of the Jarboe-led “In My Garden” that Swans as we now know them was born. Gira said he named the band after a creature that was beautiful, but deadly; he mastered the latter attribute out of the gate, but it is here that the band first lived up to the former.

Inspired by Gira’s fascination with the rock-star cadences and charisma of televangelists like Jimmy Swaggart, Children of God does convey some of the style of such preachers. Gira’s bark of “The sex in your soul will damn you to hell” on “New Mind” certainly sounds like Moral Majority proselytizing, while “Sex, God, Sex” shrewdly spots how easily such religious fervor dips into a kind of erotic fantasy. Gira’s lyrics, long fascinated with the idea of existence as an act of surrender to more powerful forces, translate easily the supplication of the penitent as he drawls “I will beg you, Lord/ And I will pray for you to forgive me now” before shouting “Come into me, Lord/ Come in now” with such a coital moan that to call this a double entendre would be generous.

For the most part, however, the album finds Gira exploring the idea of religion in terms that long predate television and American hucksterism, instead finding grim inspiration in Old Testament fire. “Blood and Honey,” for example, sounds like a retelling of Moses’s birth and abandonment in the Nile as Jarboe plays the role of Jochebed, albeit in a version where her infant drowns instead of being taken in by the Egyptians. “I found you lying where I drowned you/ I found you lying where I lay with you” she coos eerily. The subject of filicide is even more explicitly explored in “Beautiful Child,” Gira’s take on the story of Abraham being ordered by God to kill his son, Isaac. Anyone who might have thought that higher recording fidelity and a greater commitment to songcraft might have softened Swans need only listen to this hellish track, which brings the clanging, shapeless noise heretofore buried in murk on earlier records into terrifying focus. As Norman Westberg and Algis Kizys bash one-chord deeper and deeper into the Earth, Gira roars nightmarish images like “I will hold this child in my arms/ I will caress his soft head/ Listen to him cry, listen to him cry” with zealous rage and ecstasy as Jarboe warbles wordlessly behind him, a choir of angels in the true Biblical sense as beings beyond the processing capacity of the human mind. Amid steep competition, “Beautiful Child” may be the scariest and most overwhelming song in the Swans canon.

Even when the theme grows thin and Gira drifts into looser ruminations on longing and pain, there is a sophistication here absent on prior releases. “Trust Me” begins with a gentle acoustic guitar before dumping into a clamorous storm, while “Blind Love”’s nervy soft-loud dynamics hint at the fuller mastery of the band’s core use of repetition that would show up closer to the group’s first dissolution and subsequent reunion. And in the softer yet eerie “You’re Not Real, Girl” and “Real Love,” complete with demon croons from Gira, are the foundation for Swans’ impending pivot to gothic art-folk that would define them through the early-‘90s.

The new remaster of this seminal album sounds considerably fuller than previous CD issues, and the notorious tinkerer Gira finally puts the original version of sludge dirge track “Our Love Lies” back in place of the alternate recording used for all available reissues to this point. As rewarding is the inclusion of a remaster of the live document of the Children of God tour, Feel Good Now. Countless bands would consider the stage where their music takes truest flight, but even factoring the immense quality of Swans’ catalog, their studio albums have always felt like ways to coalesce their legendary and terrifying live act onto something of permanent record. Swans live albums abound, and by this point the group already had a certifiable classic in the form of the deafening squall of Public Castration Is a Good Idea. Feel Good Now, like all of the band’s live LPs prior to the startling sonic clarity of the group’s first kiss-off, Swans Are Dead, is muddled by the sheer limits of recording technology; recorded on a professional-standard Walkman, the double-LP makes even official soundboard recordings sound tinny and lacking the reverberating bass weight of their low roar.

Nonetheless, anyone who might feel that Children of God marked a diversion into a more placid, pretty Swans will have that notion brutally checked by the live renditions documented on this record. The title track, for example, is transformed into a demented call-and-response between Jarboe and Gira, whose yells shatter the studio version’s soaring irony and foreground the self-annihilating, Hellraiser-like rapture of blood that was buried beneath the surface. “Sex, God, Sex” and “Trust Me” rage so hard that reserved songs like “Blackmail” take on even more unsettling eye-of-the storm calm than they did on the record. A strung-out version of “Blind Love” hints at the epic, grueling, cathartic performances that the band would not master until Soundtracks for the Blind and their post-reunion albums and shows, while “Beautiful Child,” already the studio album’s most ferocious track, is transformed further into the sound of the sky tearing open as God demands sacrifice. Westerberg and bassist Algis Kizys create metallic sheets of sound that somehow sound quieter than Gira’s deranged barks. We get a full rendition here, as well as a “reprise” in the form of an excerpt of a London show in which the venue operator (not unreasonably) feared the impact of this music on the place’s PA system so much that he pulled the cord on the instruments, which has the truly nightmarish side effect of leaving on Gira’s mic live as he continues to scream into a sudden vacuum of silence.

Frustratingly, the Feel Good Now reissue currently available on CD and digital uses an altered and shortened tracklisting as used for other CD issues, inexplicably losing the flow and reasonable facsimile of a tour set that marked the original vinyl release. Supposedly a vinyl reissue is due, and hopefully it restores the original tracklist. Still, the souped-up (within limits) sound and easy availability of these recordings only hammer home that Swans truly arrived with the album that this tour supported.