January 25, 2021
Home Books Predicting the Past: Edited and designed by Stephen Berkman 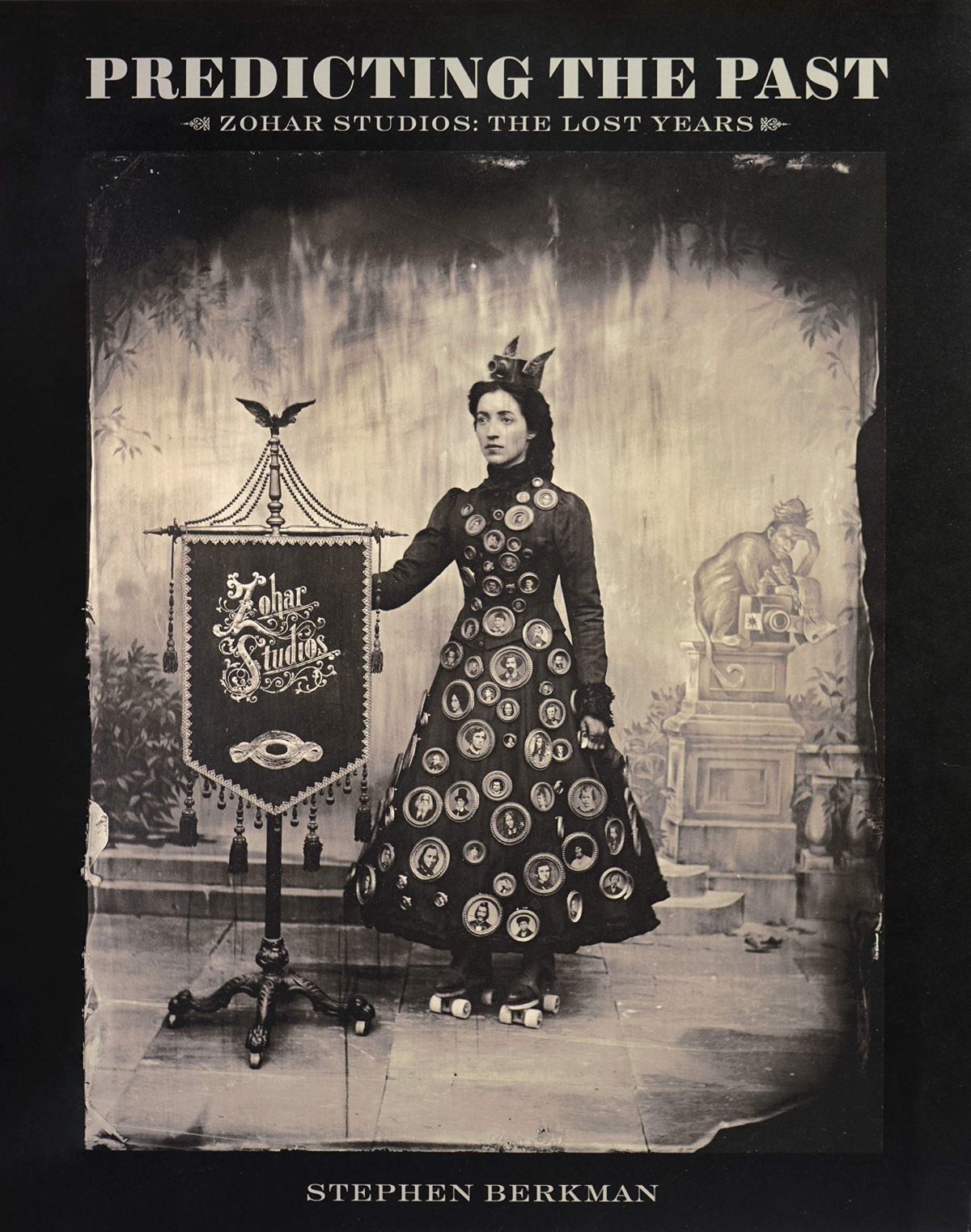 “How about if we just call this whole project a photographic novel?” Stephen Berkman, credited as the editor of Predicting the Past—Zohar Studios: The Lost Years makes this suggestion to Lawrence Weschler, who was tasked with writing the afterword to this lavish tome. Weschler, himself an author of creative nonfiction, was at that point having trouble getting Berkman to explain exactly how he came upon the remarkable wet-collodion plate photographs of forgotten 19th-century lensman Shimmel Zohar. Well, there’s a tale in that, one best explained in photographs first and then in the erudite and often dryly humorous exegesis-cum-obsessive act of artistic ventriloquism that ensues.

But first, the images. The startling cover photo looks for all the world like an example of 19th-century advertising, a woman standing next to a banner for Zohar Studios and wearing a dress festooned with miniature samples of the studio’s wares. The texture and tonality look very much of the period, but when one looks closely, one might wonder if the roller skates the model is wearing is indeed a mid-19th-century model.

The funereal portrait, “The Baroness of Babylon Boulevard,” again looks impeccably 19th-century, but a photo titled “Merkin Merchant” upends one’s expectations of viable commercial ventures of the era. “Sailor’s Knot” goes even further: it depicts its subject with his generous endowment exposed and tied up like a most uncomfortable pretzel. And the subject of the portrait titled “Illusionist with Circassian Spirit” looks suspiciously like magician Ricky Jay. What’s going on here anyway?

“Shtetl Stick,” which depicts an Orthodox Jew sitting with a matching dummy on his knee, is the key. In voluminous notes that Berkman credits to one Professor Moses de León (one of many names you will want to look up in hopes of solving this handsome puzzle), it is noted that, “From the very beginning of photography, artistic interpretations of self-portraiture seamlessly blended fact and fiction.” Predicting the Past is on the surface an homage to Zohar, who reportedly operated a studio in New York’s predominantly Jewish Lower East Side in the mid-19th century. Gorgeously printed and designed, the book opens up a wondrous world of yore, no less enchanting in that it never really existed. Berkman uses antiquated lenses and photographic processes to evoke this mysterious era, blending fact and fiction much like the early pioneers of photography, and taking on this quasi-historical persona like a highly skilled ventriloquist working without a humanoid familiar but with language and sticky emulsion.

As deft as the artist is with antiquated photographic processes, the author is also a clever writer, taking on the tone of an excited scholar. Describing a plate that seems to depict a furry companion piloting a small boat, Berkman—err, de León…well, somebody—writes, “The relationship between Zohar and his cat was unaffected by their different stations in life. Their duties were reciprocal: one instigated the journey, while the other was the guide, scanning the horizon, ever alert, and maintaining equilibrium form stern to bow.”

In an eloquent, studious prose, the notes seem to introduce fictional figures among the real, with such skill that it can be hard to tell when the author is pulling your leg. For instance, when he notes that one Hippolyte Bayard claims to have invented photography before Louis Daguerre, who took credit for the world-agitating medium, you can take his word for it; yet a figure skater known as Contessa de Vienna, whom Zohar apparently hired as a “banner lady” to advertise his studio, does not seem to have existed. Berkman seems to have has gone to the trouble of creating a handbill from the era advertising the Contessa’s skills, and it’s ingenious, down to period fonts and the habit of designers of the era of mixing up font types and sizes. (Unless maybe this one is somehow real? Who knows?) An epigraph, facing the image of the Contessa, reads “The future is composed merely of images of the past.” Credited to Humphry Davy, this turns out to be a genuine quotation from a Cornish chemist who in 1799 discovered that nitrous oxide was good for a laugh. Predicting the Past is a more subtle chemical trickery, funny and beautiful.

A note to those dedicated to digital over analog: describing an ordinary (but period accurate) photograph of a storage box made for glass photographic plates, Berkman (one presumes) writes, “In the end, the fragile and even archaic glass plate photographs may outlast contemporary digital photography,” as the latter is, “…uniquely dependent on an infrastructure of computers and data storage.” You seem skeptical, but ask yourself this: how easy is it to read floppy disks created on computers just 20 years ago? And who at the time had the forethought to migrate such material on the next generation of digital storage?

Leaving such crucial archival issues aside, Predicting the Past reads like a Winesburg, Ohio of early photography, addressing the ephemeral nature of images, the robustness of physical media and even the experience of Jewish immigrants in 19th century New York. So if a Ben Franklin seems like a lot to pay for one book, even one so well-crafted as this, then think of it as at least three books, at once a stunning photobook, a dense historical compendium and a fascinating portal into another time—which may turn out to be today.