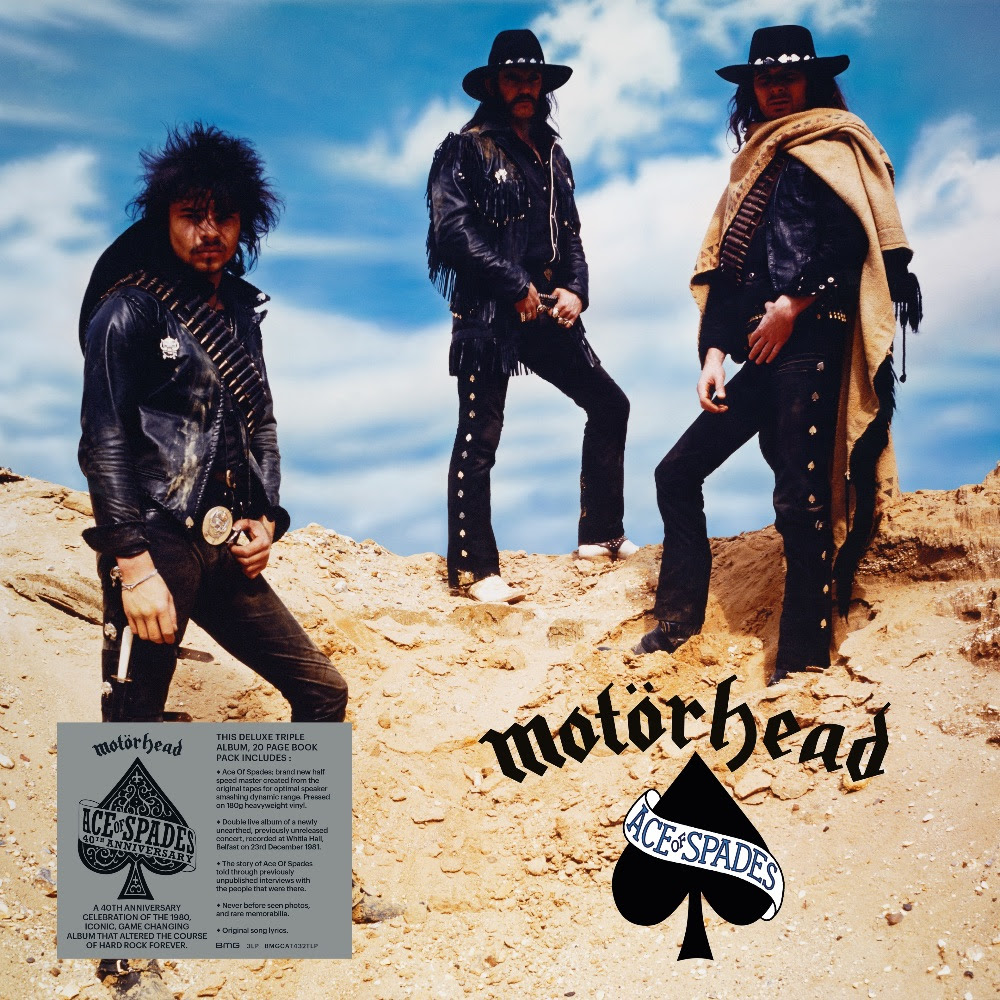 Three men in black adorn the cover, standing on a crumbling, desiccated cliff. They rest in rock star poses, legs spread in menacing, tough guy attitudes. The man in the foreground fingers his outlandish belt buckle, a bandolier of bullets slung over his leather jacket. The faces of his two companions in the back are obscured by shadows created by oversized sombreros. One has thrown a blanket around his neck. The other’s fingers are crested with large rings. This may sound like a still from a Sergio Leone Spaghetti Western or at least contain music reminiscent of Ennio Morricone’s cinematic score. Instead, it’s the cover of Motörhead’s most popular record, Ace of Spades, an album that turned 40 in 2020.

After perfecting their sound in 1979 with records Bomber and Overkill, Motörhead built up a loyal fanbase via constant touring behind those releases. They would supposedly play any room that would have them, no matter how disgusting. Besides, a rotten venue fits the band’s fast and loose aesthetic well.

Motörhead’s music exists in the sweet spot that lies between metal and punk, drawing fans of both genres to their shows. Lumped together with bands such as Iron Maiden in what would be known as the “New Wave of British Heavy Metal,” Motörhead stood apart from contemporaries by pushing the tempos of their songs faster and harder. They weren’t theatrical like Maiden could be, and weren’t drawn to the cheap hit like Def Leppard. Instead, Motörhead fought against what constituted good taste and kept on plowing over that line.

For Ace of Spades, Motörhead recruited producer Vic Maile, who had worked with Jimi Hendrix and Led Zeppelin, to man the boards. Moving on from Jimmy Miller, who produced Motörhead’s pair of 1979 albums, Maile gives Ace of Spades a bit of a cleaner sound, making the band’s music a bit more accessible while retaining the visceral raw qualities that attracted fans. On past albums, the members of Motörhead helped Miller in the mixing, but with Ace of Spades, Maile did all the work himself.

One thing Maile did not tame was Lemmy’s lyrical content. Songs such as “Love Me Like a Reptile,” “Jailbait” and “The Chase is Better Than the Catch” all celebrate the seamier side of rock music; sonnets to eternal love these songs are not. However, Lemmy admits to mainly having a laugh when it came to his lyrics. He would often come up with the title first and then craft the song around that. His bandmates claim that Lemmy also wrote a good deal of his songs while sitting on the toilet, emerging from the bathroom with reams of paper with ideas sketched down on them. The album’s title track also gave Motörhead an unofficial anthem. “Ace of Spades” is the one of the band’s highest charting songs, even though Lemmy would later complain that he grew sick of it. Basically just a song about gambling, something about its urgent raw power surprised listeners and put Motörhead on the map as an upper echelon metal act. Appearances on “Top of the Pops” also helped the song gain notoriety.

Included with the reissue is a raucous show in Belfast from the era in a deluxe booklet featuring essays and photos – but what you really need is the record itself. For 45 bracing minutes, Ace of Spades allows us to travel back to a time to when Lemmy squawked and yelped about the virtues of backstage sex, living fast and dying young. We’ve come so far since then, but the music is still out there, waiting to shoot us in the back when we’re not looking.