February 25, 2021
Home Books A Stranger Among Saints: by Jonathan Mack 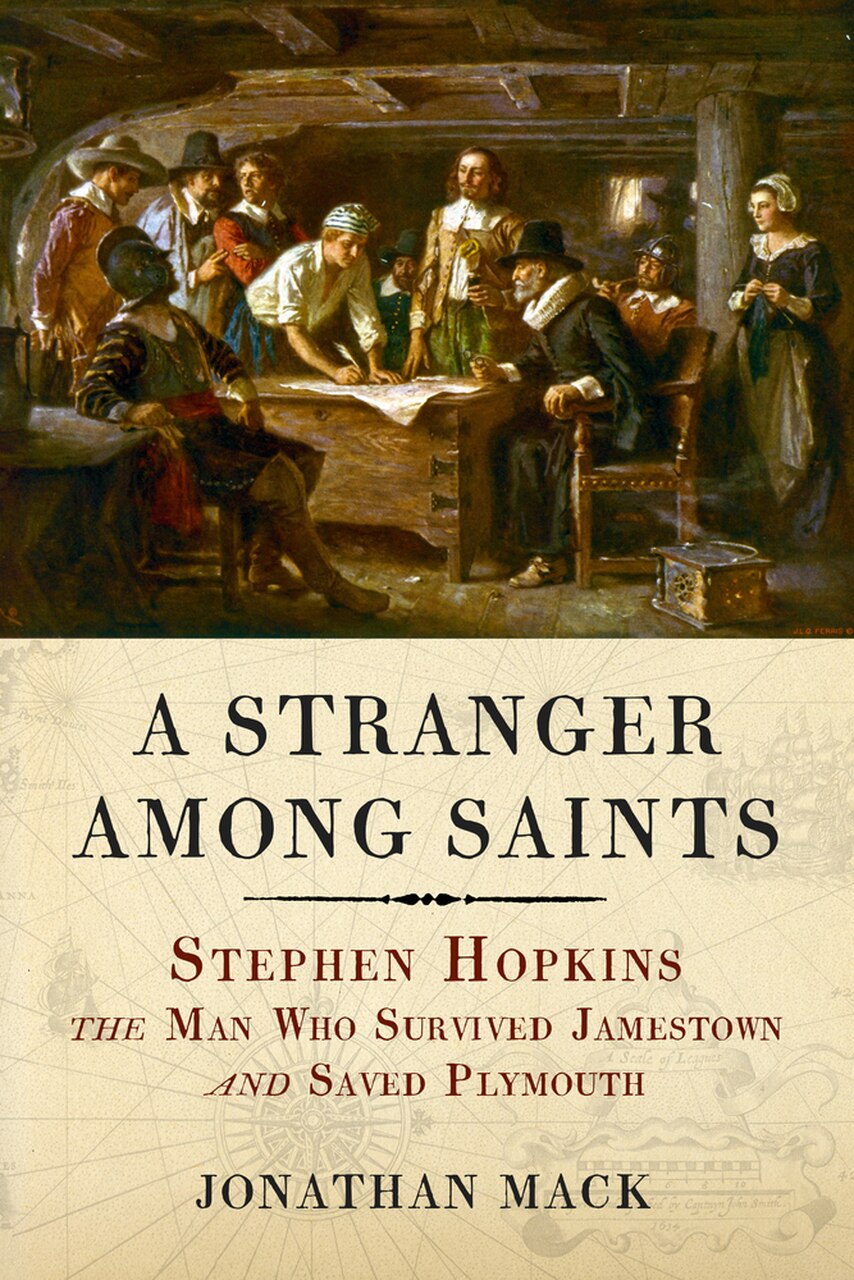 Last Thanksgiving, whatever commemoration of the quatercentenary of the Mayflower’s landing transpired occurred far from any media spotlight. Descendants of those disembarking in 1620 on Cape Cod remained subdued in celebrations of their forebears’ harbor. Although their legendary feast did not occur until the following autumn, few today may know of hardships suffered in an earlier year of enclosure, privation, disease, unrest and sudden death. In A Stranger Among Saints: Stephen Hopkins, The Man Who Survived Jamestown and Saved Plymouth, Jonathan Mack, applying thoughtful conjecture rather than solid proof drawn from the often scanty historical records, sets up the scenario of four centuries ago.

At the time, one man was called upon to interpret and serve as a liaison with the natives who watched the motley crew of settlers and sailors who occupied the coast of present-day Massachusetts. He alone had knowledge of the common language group, Algonquian, spoken by First Nations from the St. Lawrence River down to the Chesapeake Bay. Without this “Stranger,” one of Plymouth’s marginalized cohort of non-Separatists who accompanied the religious dissenters who judged themselves “Saints,” their battered hamlet might never have lasted until the next year’s harvest. Stephen Hopkins found himself in this elevated role. He left his family to sign on in 1609 with the London Company of Merchant Adventurers, a predecessor of venture capitalists, who financed those who would work off the price of their Atlantic crossing as indentured servants, as well as those better-off boarding who could support their travel costs. Son of a farmer who worked land he did not own and who had moved to the city of Winchester, Hopkins grew up literate, a rarity for those of the lower classes.

A graduate of Harvard Law, Mack approaches Hopkins’ life and career with at least as many suppositions as facts. While this may make for a less than airtight argument, the author’s skill in arranging the evidence bolsters his case. Mack affirms that Hopkins, who signed on as a servant to the Sea Venture, represented a rarity. His up-and-coming career propelled him out of obscurity; his first voyage, a supply run to assist the beleaguered Jamestown outpost in 1609-10, ran aground in Bermuda. Hopkins subsequently showed his mettle when he asserted that, the snow shipwrecked castaways held no further allegiance to their captains nor to the London Company. What then ensued has ensured Hopkins’ entertaining influence. As “both the captain and follower of this mutiny,” Hopkins’ roguish pose entered the chronicle of a fellow shipmate. William Strachey’s tale then caught the eye of William Shakespeare, who, inspired by upstart Hopkins, dubbed his counterpart as Stephano, a “drunken butler,” in his last play, The Tempest, set in the “still-vex’d Bermoothes.”

Much drama followed, after those stranded in the middle of the ocean for nine months eventually built two makeshift boats. In 14 days, they finally reached Jamestown. There, they rallied the disintegrating Jamestown community, already dispersing after the departure of Captain John Smith homeward to England. “The Starving Time” had reduced these first Virginians from five hundred to sixty. One-half to three-quarters of those who afterwards disembarked at Jamestown fell victim to plagues or dangers. Hopkins meanwhile proved, again, how he coped under stress in a struggling seaside enclave, as during his servitude he had become acclimated to Jamestown. He assisted at the marriage of Pocahontas to John Rolfe; as a parson’s clerk, he served as a tribal emissary. He sought harmony on this fractious frontier between the foolhardy Englishmen and the harassed Powhatan. He mastered enough of their native tongue to learn some indigenous ways, and this facility would serve many well soon after.

Having returned to England in 1616, freed from his contract to the Company, now a widower with children to raise back home, Hopkins turned westward just four years later. As his fortunes rose, his family, second wife and his own servants joined him as the Mayflower and its companion ship the Speedwell set sail for the New World. The latter vessel had to abandon its attempt early on, and many passengers transferred to their soon-to-be fabled sister ship, swelling the roster of “Strangers,” who now comprised a third of the 100-odd voyagers. Their motives, economic rather than religious, compelled them to seek another kind of freedom.

Mack explains carefully how the Mayflower, bound for Jamestown, found itself off-course in bad weather. This swept the colonists all the way north, far beyond the capitalist remit of the London Company. As in Bermuda, so in the endeavor at Plymouth: a band of enterprising English landed outside any recognized jurisdiction or royal control. This led to the improvised Mayflower Compact on board, before the ship irrevocably landed. This agreement kept peace between the Separatists and those not “Saints”; it bonded migrants together, as already winter was coming.

What Stranger Among Saints then tells may solve a problem in the minds of many who learned of the 1620 landing. How did the settlers communicate right away with the natives? Mack documents how the English during the previous 20 years had fished and traded with these indigenous peoples. Further, they cynically had deceived their trusting trading partners. The Wampanoag Confederacy, itself divided among competing nations, observed the “European interlopers” with justified suspicion. For they had kidnapped their kin, such as the man whose name comes down to us as “Squanto,” and sent him and others back to England so as to train as translators and negotiators who then were returned to America, planted in advance of the new ships’ bounty. Therefore, Squanto found himself in the unenviable and pivotal position to face and deal firsthand with the English “adventurers” and dissenters washed up in the bay.

Narrating the subsequent events, as set down by both William Bradford and the accounts of Mourt’s Relation, Mack discerns the retreat of the Confederacy from the English incursions. Fearing the fate of Squanto and his unlucky compatriots, the tribes bode their time strategically as the armed yet ill-prepared newcomers suffered. By spring of 1621, half of these hundred English arrivals succumbed to starvation and sickness. Nearly half of the crew among them.

This decimation culled the weak, the old, the infirm and the infant. A half-a-dozen males “strong enough to care for the sick and run the colony” included, presumably by Mack’s estimation, Hopkins himself. The native leader Massasoit sent his delegate Samoset to parley with the undermined colonists. Hopkins invited the “sagamore” diplomat to stay the night, thus expressing the welcome that the English would be expected to offer to the surrounding peoples.

An alliance lasting until 1675 endured between the Confederacy and those of the Compact. Hopkins’ fluency in the northern forms of the Algonquian language must have improved, for chronicles claim he engaged “in a complicated discussion with the Pokanokat about discourtesy, thievery, and the punishment of God.” The former minister’s assistant must have tangled with the Puritan establishment, however. For by 1633, Hopkins, who had shimmied his way up in rank as an ambassador with the natives around them, clashed with the law. He’d opened an alehouse, his mother-in-law’s business in the English realm of Hampshire. As a “Stranger,” his defiance of Sabbath restrictions on the sale of alcohol, and legal disputes, led to Hopkins’ withdrawal from Plymouth’s palisades. He retreated to his old house on Cape Cod.

Disillusioned by the influx of two thousand migrants, the Bay Colony’s avarice, the 1635 Pequot War and the harsh regime of those who had accompanied him across the Atlantic, Hopkins fades from chronology. However, the sharpest points of Mack’s analysis now uncover in his subject’s 1644 will nuanced insights. Mack’s facility with the law enables him to restore the rest of Hopkins’ story, which has been “primarily consigned to anecdotes and footnotes.” In the last testament, and the inventory of Hopkins’ tavern-houses, among his possessions numbered a pale green rug. This humble heirloom was that upon which the Pilgrims had ratified their treaty with the Wampanoag Confederacy two-dozen years earlier. And whatever status Hopkins by his death at sixty-three had won or lost, his witnesses to the will were none other than the founding firebrand Miles Standish and the Colony’s first governor, William Bradford. When Bradford examined the inventory of Hopkins’ modest estate, “in his belongings no weapons were found.”

Jonathan Mack derives subtle lessons in relations between refugees and authorities, native and settler. Reading between the lines to A Stranger Among Saints, pertinent and relevant messages arise that Americans four centuries later would be wise to heed, rather than to denigrate these testimonies as if discards deemed unworthy of guidance.