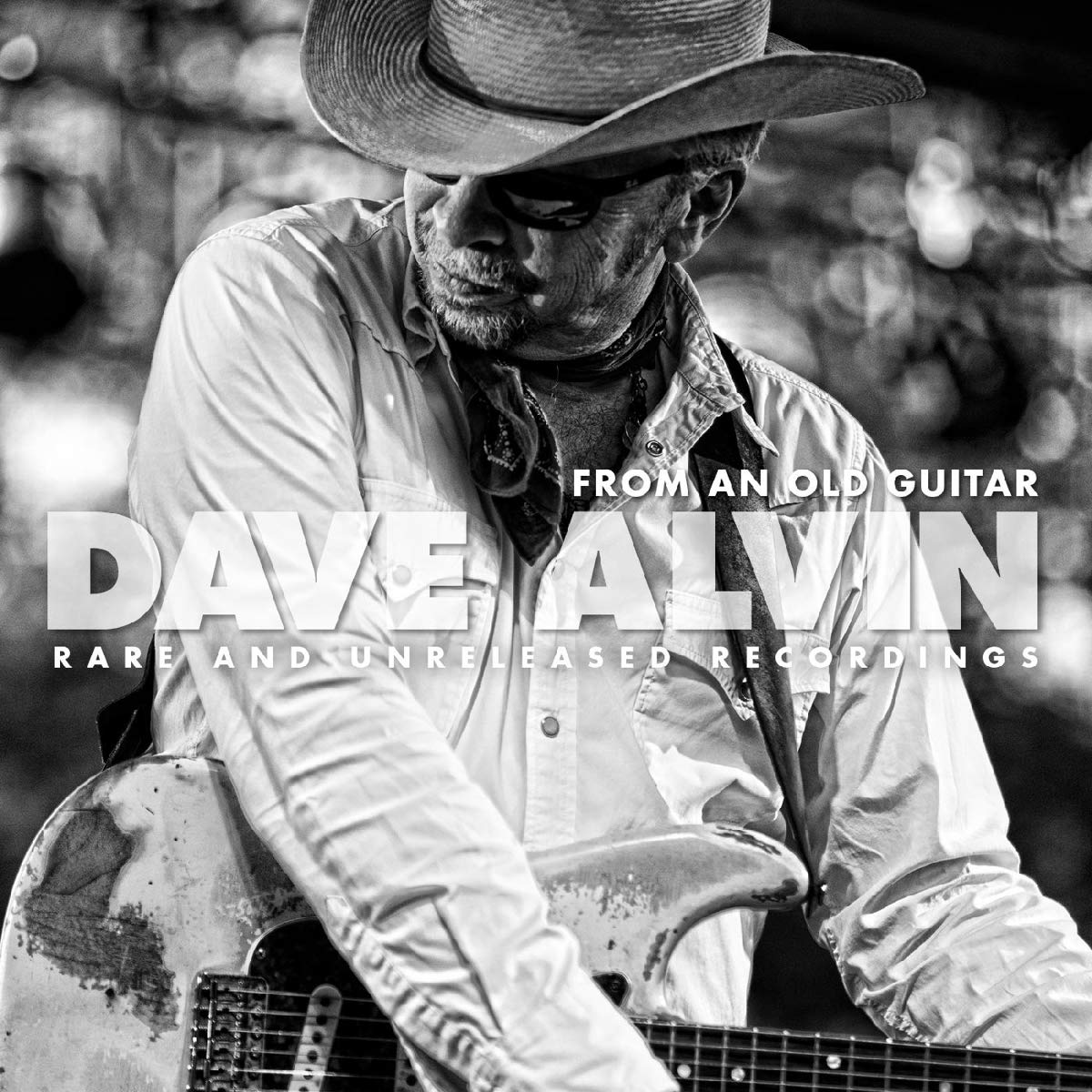 “Musician’s musicians” like Dave Alvin generally shine at songwriting, mastery of their instrument, and song interpretation — it takes that level of competence to attract the admiration of their fellow skilled artists. Both as part of a band and in his solo work, Alvin (The Blasters, X, The Knitters) has garnered enormous respect for all of these accomplishments, and his ability to attract other worthy talent is unquestionable on this appealing double album.

A poet and influential songwriter himself, Alvin has chosen to heavily highlight the songwriting of others on From an Old Guitar. Tracks from such disparate composers as Bob Dylan, Earl Hooker, Peter Case, Bo Carter and Willie Dixon sit side by side with a speckle of Alvin originals. Cindy Cashdollar, Christy McWilson, Bob Glaub, Danny Ott, Greg Leisz and many others guest on a range of blues, Western, Americana/roots, folk and country tunes.

The careful ordering of the album, interleaving styles and depths, belies its gradual creation. Alvin has explained that when he has a few extra studio hours, he invites friends into the studio to record something — just for the fun of it, or in case he needs an extra track. The songs here were recorded over a period of years, and final production was Alvin’s; it is to his credit that the attention to sequence and balance here creates the illusion of planned coherence. But with that said, it’s true that albums of “leftovers” often under-deliver, and it would be easy to come at From an Old Guitar with a degree of cynicism. Spoiler alert: From an Old Guitar is a treat from start to finish.

The album bursts out of the gate with a gleam of slide guitar (Danny Ott) and Alvin’s growly baritone on Chris Smither’s “Link of Chain.” He follows this with an unexpected and powerful twist to Bob Dylan’s “Highway 61 Revisited,” featuring discordant chords and metallic, suspended intervals. Alvin and Greg Leisz play off each other on electric guitar. The tone is dark, less festive than Dylan’s original, and Alvin’s gift at storytelling — on display in several places on From an Old Guitar — invests the track with far more depth and even a sheen of horror.

The album features several well-chosen instrumentals. In “(Variations on Earl Hooker’s) Guitar Rumba,” Alvin’s electric guitar leads a crowd including Dale Spalding of Canned Heat on harmonica, Joe Terry on piano and Chris G. Miller on slide guitar take the tune through versions from honky-tonk to New Orleans blues to mariachi. Spalding’s genius is such that he can make the harmonica resemble everything from trombone to accordion, and the band feels bigger than its real size. Percussion by Steve Mugalian moves competently from style to style and sets toes tapping; the listener is hard-put not to dance. Alvin hooks up with Blasters colleague John Bazz (on acoustic bass) as well as Mugalian for “Perdido Street Blues,” a Lil Hardin Armstrong classic from 1926. Gene Taylor’s keys dazzle, and Greg Leisz on lap steel provides a dreamy backdrop to Alvin’s tight, classic National steel. Alvin’s original “Krazy and Ignatz,” a sweet smiler of a tune, also spotlights his National steel, here in duet with Cindy Cashdollar’s expert dobro.

Alvin delivers a few sweet but mature ballads in between the blues and folk. In the lovely “Amanda” (Robert Lee McDill), a hit for both Waylon Jennings and Don Williams in the 1970s and a highlight here, the singer looks back at a lifetime’s relationship from the vantage point of middle age. Unlike those earlier, slower, soulful versions, Alvin’s has a note of cheerful self-deprecation — you can hear his wry smile on the line “Now I’m way past 40 and still wearing jeans.” He’s aided by Chris Gaffney’s backing vocals; Gaffney’s contrasting timbre and tenor range add lift to Alvin’s rich baritone. Cindy Wasserman’s soft harmonies and Wyman Reese’s tinkling piano gently season the sober realism of “Inside” (Bill Morrissey): “This ain’t Hollywood/ No it never really gets that good/ Call it love if you think you should…”

But Alvin and his co-conspirators shine on high-energy tracks, too, and it doesn’t get much more fun than Alvin’s own composition “Beautiful City ‘Cross the River.” It leads in with ethereal vocals by Christy McWilson, but that’s a red herring — Alvin’s trademark humor is on display in this on-the-lam rockabilly party of a song, with a big sound aided by Don Heffington’s percussion, Skip Edwards’ accordion, Danny Ott on slide guitar and, especially, Alvin’s own electric. It’s followed by the joyous country-rock “Dynamite Woman” (Doug Sahm), which makes up in exuberant music what it may lack in lyrical complexity. The “dynamite woman” line may get a little old by the end, but the listener won’t mind — they’ll be too busy dancing around the room (and marvelling at Don Heffington’s jaw harp).

Sixteen tracks may sound like a wallop in these days of EPs and single-track releases, but fear not: this album is so enjoyable it’ll seem far too short a time to spend in the company of Alvin and friends.

Bargain Bin Babylon: Cowboy Junkies: ‘Cause Cheap Is How I Feel

The U.S. 12” version of ‘Cause Cheap Is How I Feel was backed with two extraordinary track…