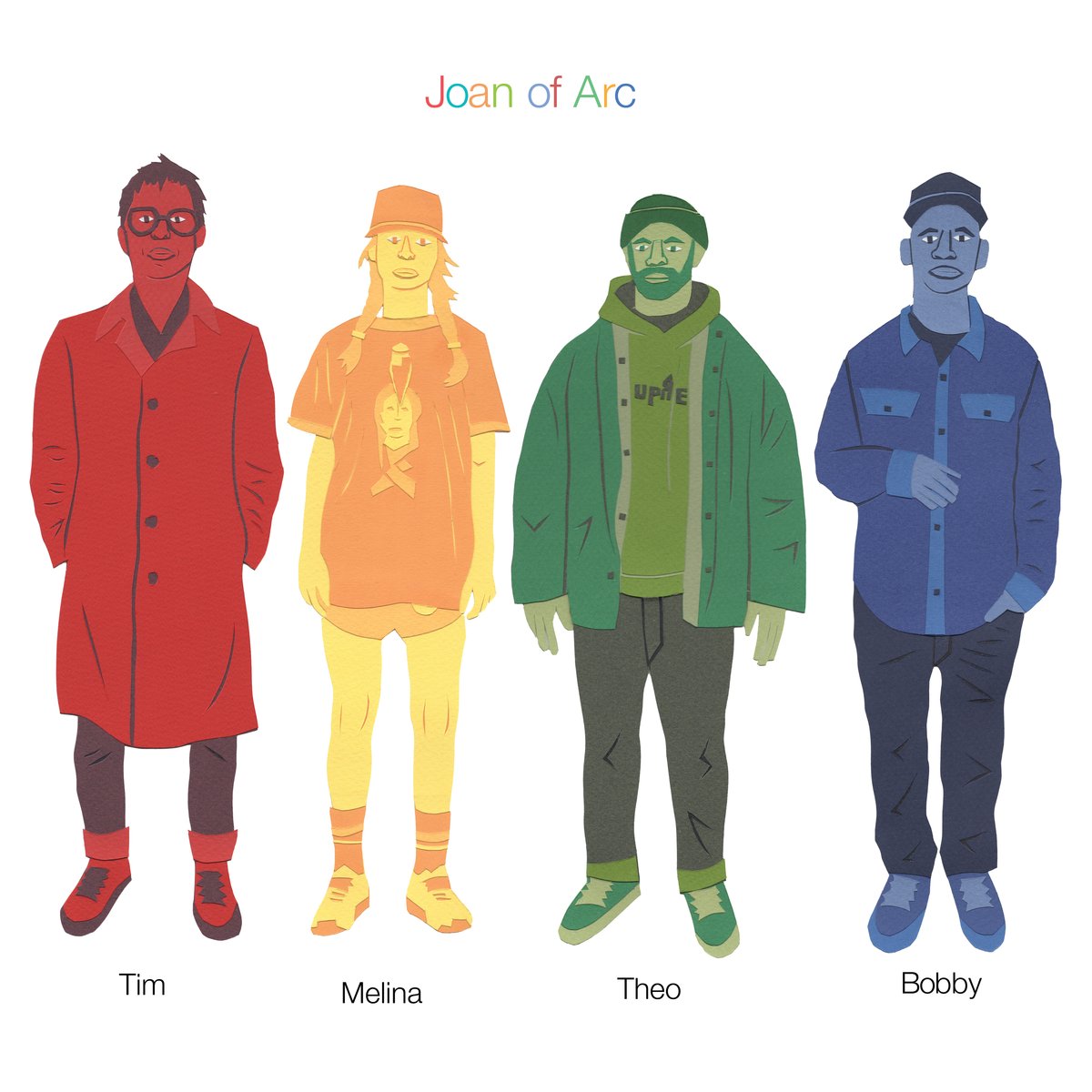 Listening to Tim Melina Theo Bobby, the newest album by the long-running, ever-changing homebase of Chicago indie royalty Tim Kinsella – founder of seminal Emo group Cap’n Jazz and brother of equally-seminal American Football captain Mike Kinsella – it doesn’t exactly sound that far away from where the band have always been. This isn’t to say it’s boring or samey – it’s just that, for Joan of Arc, the album is just another excellent project by the group, full of catchy songs and Kinsella’s trademark wit, worthy of standing up as an equal to the band’s finest, like A Portable Model Of or In Rape Fantasy and Terror Sex We Trust. What’s important to know about Tim Melina Theo Bobby, though, is that it truly is not just another day at the office for Kinsella et al; it is, in fact, the very last day at the office. With it, Joan of Arc is no more.

On one hand, it’s hard to be fully sad about this. Tim Melina Theo Bobby is the 24th album by the band since 1997, and despite a brief breakup and an ever-shifting lineup, they managed to only take six scattered years off from releasing albums during that whole span. That was on top of various side projects, like Make Believe, Owls, Everyoned, Good Fuck and a whole damn Cap’n Jazz reunion, and even that doesn’t include the work made by members who weren’t named Kinsella. The point is, we’ve gotten a lot of work out of this man, and even when it hasn’t been under the Joan of Arc banner, it has been really damn good. He’s just really good at what he does, and has been since before he was old enough to drive.

On the other hand, it’s hard to not feel choked up about the end of a band like this one – one that has been reliably funny, heartfelt, weird, unspeakably infectious and just plain great for as long as they have. In that regard, Tim Melina Theo Bobby is the best send-off we could have. No two songs sound exactly alike, each more excellently-produced than the last, with Kinsella and Melina Ausikaitis tag-teaming vocal duties to keep it feeling like an ever-shifting beast. It’s not the best the band have ever been, but it represents them at their best, churning out songs that deserve to be hits, but will instead remain hidden and beloved gems by those in the know.

What the album lacks is a coherent flow between songs, but this is a grand asset. They shouldn’t be able to pull off the one-two punch that opens the album: after the charming and gentle “Destiny Revision,” which sounds like it would fit squarely on the first American Football album, Ausikaitis delivers the scorching “Something Kind” with the cool intensity of Kim Gordon. The shredding noisiness of the track is enough that it may take a few listens before you catch that she’s actually singing “He was a douchebag on a bike” in the song’s second verse. There are two entirely instrumental songs and they’re separated only by the churning dance track “Feedback 3/4,” yet miraculously neither of those tracks feel at all like filler – which is great news, because at a whopping 32 minutes, the presence of filler would be downright embarrassing. These are far from it; “Land Surveyor” is a deliciously acidic groove, while the churning, almost aggressive atmosphere of “The Dawn of Something” is addicting enough that they could have doubled the song’s three-minute length and still not overstayed their welcome. This is all to say: Tim Melina Theo Bobby could have used some help in the sequencing department, but the fact that they never got that help makes this goodbye all the more real and satisfying, and classically Joan of Arc.

Three songs from the end, we get the album’s most deceptively-great standout track. “Cover Letter Song” imagines Kinsella listing all of the duties he’s performed over the course of his life, each more mundane than the last: “I bagged groceries/ I collected carts/ I mowed lawns/ And I washed cars/ I was a clerk at a record store/ I alphabetized file cabinets/ I licked envelopes,” he sings over a Tobacco-esque beat. In between, though, he drops in a reminder of what he was really doing, which is writing songs, “‘Cause I got dreams and I got goals/ I’m gonna be the next Tim Kinsella.” It’s a perfect little metaphor for what makes Joan of Arc songs so good a lot of the time: it doesn’t seem like this should be a great song – it’s effectively just him recounting the bare facts of his work experience, free of embellishment – but hidden in plain sight is the kernel of something really special, and that something transforms the entire song, lifting it somewhere truly special.

By the time the overwhelmingly brief “Upside Down Bottomless Pit” arrives, it’s hard to believe you’ve reached the end of Tim Melina Theo Bobby – and, with it, the band’s career. Frankly, it’s a bizarre way to end a band. There’s no pomp, no grandeur – “It’s all an upside down bottomless pit/ And it sometimes feels good and quick,” Kinsella sings, his voice echoing among the messy, twinkling guitar line, with less than a minute to go. As the song ends, an earlier line comes into sharper focus. On “Feedback 3/4,” Ausikaitis delivers “Another role where the movie ends nice/ It’s a natural conclusion that people can buy.” Tim Melina Theo Bobby is an ending for Joan of Arc that’s totally plausible: anything else would have seemed like they were trying too damn hard. Though Kinsella sings “Let go, let go/ I’m revising my destiny,” a revision like that wouldn’t be fitting for his band. Going out with a bang is for other bands. Quitting the job like it’s like any other day (or album) feels effortless and bizarre, which is how the band’s greatest albums always felt. Thanks to you, Joan of Arc, for that – a movie ending like this feels like a truly special parting gift.