There is something undeniably quaint about John Sturges’ sprawling 1963 World War II epic, The Great Escape. It exists in this weird liminal cinematic plane, somewhere between the bloated, nearly bloodless David Lean thrillers of the past and the gritty, “war is hell” movies that would come later, portraying WWII as the murderous hellscape it most likely was, full of mangled corpses and confusion.

On the surface, The Great Escape is too squeaky clean to be a movie about a group of prisoners trying to bust out of a Nazi internment camp in Germany. For its first half, the movie almost feels like an indentured frat house comedy than a thriller. Based on Paul Brickhill’s book about his own experiences during WWII, The Great Escape is purported to be entirely true, but there are some details that are just too far-fetched. However, Sturges doesn’t allow the film to take itself too seriously and this comedic wink moves The Great Escape from fabulation to charming fluff.

Sturges knew a bit about the milieu, serving in World War II himself as a captain in the Army. He didn’t see much combat, however, spending most of his time behind the camera making instructional films for the military. Perhaps this lack of combat experience pushed Sturges towards Brickhill’s story. Yes, there are some pretty serious action sequences once the men escape, but Sturges seems more interested in the minutiae that goes into the men tunneling out of the internment camp, from idea to planning to execution. Brickhill himself never really escaped. He helped dig the tunnels but then developed claustrophobia. Rather than allow him to take part in the operation, the men leading the escape decided Brickhill’s phobia would jeopardize the mission. He decided to chronicle the exodus instead. 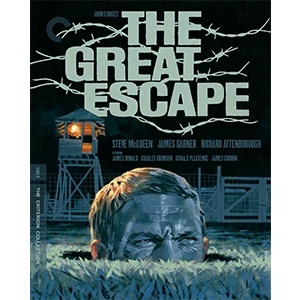 Sturges brought in some heavy duty help to adapt Brickhill’s book including novelists James Clavell, W.R. Burnett and radio writer Walter Newman, whose work is uncredited. The script is a mosaic of characters where no one feels like the main protagonist. Steve McQueen, billed first, is actually offscreen for a good portion of the film. He plays Hilts the Cooler King, a ballsy American who is frequently sent to solitary confinement for breaking camp rules. The whole escape operation is perpetrated by RAF squadron leader Roger “Big X” Bartlett (Richard Attenborough) but he is just one of the many colorful characters who populate the film.

Though the escape sequences at the end are exciting, The Great Escape is essentially a character study. From James Garner as Hendley, a man who can procure anything, to Donald Pleasance as a gentle document forger who begins to lose his eyesight, we become attached to these characters over the course of three hours. Not everyone survives and the time Sturges takes to develop his characters makes each loss deceptively difficult.

That Sturges doesn’t wallow in the hopelessness of his characters’ situation may make The Great Escape tonally strange for people used to Saving Private Ryan and Schindler’s List, especially whenever Elmer Bernstein’s jaunty theme happens to filter in. The Nazis also don’t come off as purely evil, but more like goofy wardens out of something such as “Hogan’s Heroes.” But that shouldn’t stop someone from enjoying The Great Escape. Just don’t expect fierce realism like you would in Dunkirk. Recognize that this is a Hollywood film from 1963. It’s big and dumb and fun. Sometimes that isn’t a bad thing.

That said, the grey areas between good and evil make The Great Escape interesting. The one Nazi we do meet who somewhat befriends Hendley isn’t some genocidal maniac but just some dumbass conscripted into the army who complains of his dental struggles. Sturges also foregoes much of the jingoistic rah-rah that flavors many war films of the time and instead sits back and allows the action to unfold. He focuses on the camaraderie between the men and a daring escape so great that it allows us our own escapism into a big Hollywood film, one that defies the vagaries that come with aging.