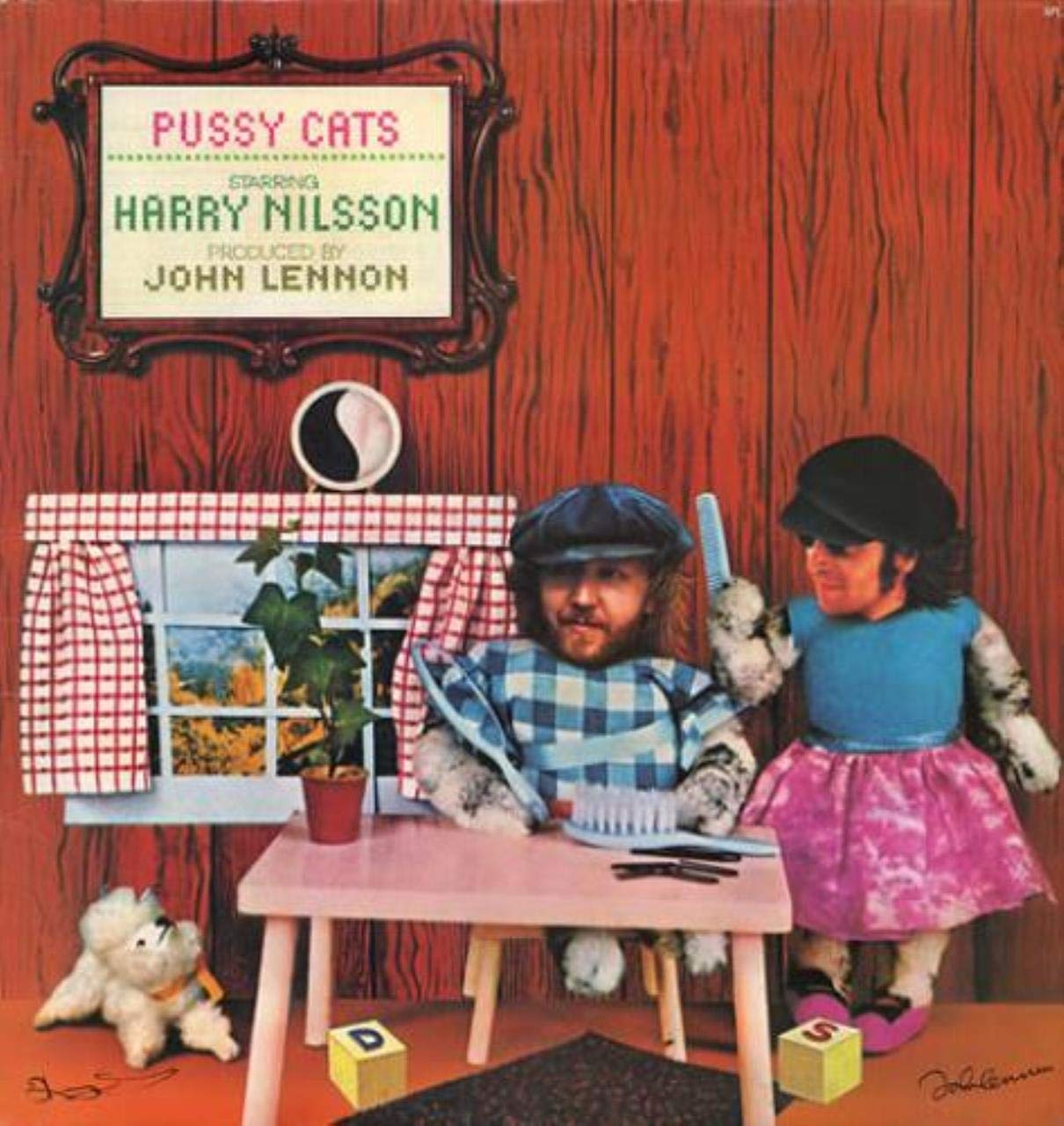 The album’s credited to Harry Nilsson, the songs are his, and the voice, at least when we can tell, is his. But it’s useful to think of Pussy Cats as a collaboration, not necessarily between a singer-songwriter and a producer but between two enablers. The 1974 album was produced by John Lennon during his boozy separation from Yoko Ono, much of which was spent in Los Angeles getting embarrassingly shitfaced with Nilsson and a gaggle of wealthy wastrels. “Many Rivers to Cross” and “Save the Last Dance for Me” luxuriate in the magisterial crawl of solo-Lennon production, where it’s clear that something important is being said by an important person. Pussy Cats uses this sound to mythologize losers, not in the way some singer-songwriters do where the insurmountability of their own flaws becomes a noble predicament, but in the way addicts do when they justify their own self-destruction by arguing to themselves that they’re the only ones who really “get it” and that the straight world just needs to pour itself another drink.

Had “Many Rivers to Cross” come later in the tracklist, it would have let us know that this is what it all really means, that all the picaresque hijinks are just a front for us to feel sorry for these poor, wounded kids. Instead, it sets the scene on a note of hopelessness and desperation, explaining the later behavior but not necessarily apologizing for it. As elsewhere on the album, it’s almost impossible to tell where Harry ends and John begins. It’s known to many rock acolytes that Harry ruptured a vocal cord on the take, losing years of prime vocal ability. He soldiered through anyway, and so does the album, which never returns to such a level of sincerity. Even the majestic cover of “Save the Last Dance for Me” is hateful. Listen how Harry spits the words “sparkling wine.” We have no expectation that the girl will save the last dance for him. She’ll run off with another guy, and he’ll be alone with his drink and the knowledge that he deserved it.

Pussy Cats consists of half covers and half originals, which was typical for albums before the Beatles showed up. It’s curious how much shorter a memory rock ’n’ roll had in the early ‘70s, when the genre began to codify and congratulate itself as an art form. Great albums like Mad Dogs & Englishmen consisted mostly of covers of songs that were then only a few years old. Could you imagine someone doing a triumphant cover of “Radioactive” in 2021 and being taken seriously, even though the song is as old now as “Subterranean Homesick Blues” was when Pussy Cats came out? “Subterranean” has never been one of my favorite Dylan songs, but I prefer the Pussy Cats version because it treats it like a standard. Like the concluding “Rock Around the Clock,” it treats its source like a frame around which to hang a ragged jam rather than a relic to respect.

Respect is not a word relevant to Pussy Cats. The Johnny Thunders cover “Loop de Loop” sounds like it’s sung by a cartoon wolf with hearts in its eyes, the word “loop” in this case bringing to mind the Latin root “lupus.” There’s a children’s choir, as if the song wasn’t already obnoxious enough, and it sounds like there are at least five Nilsson-Lennons yelling at any given time, arguing with each other on the “yeah” backing vocals. At first, its opening (“Do you wanna see a loop-a-loop-loo?”) seems constructed to barge unceremoniously into the searching beauty of “Mucho Mungo/Mt. Elga.” Then you look at the lyrics of “Mt. Elga” and realize that they make jackshit sense and that “Mucho Mungo” translates from Spanish as “a lot of mung.”

No matter how beautiful the songs are, the shit-eating grins of their creators are always leering out of the mix. “Old Forgotten Soldier” samples a Hitler speech, and given that it’s literally a song about an old forgotten soldier, it might take a couple listens to realize what a perverse thing that is to do. “Don’t Forget Me” has become a standard, and it’s usually played straight by interpreters; here, with its icy strings and ragged lead vocal, it sounds more like Randy Newman’s redneck pathetically clinging to his wife’s leg on “Marie.” The only really inessential original is “Black Sails,” a seafaring novelty with a “yardarms/legs” wordplay even Paul McCartney might’ve found tasteless.

It’s funny how alone Nilsson sounds on the album’s love songs and how surrounded he sounds on all the others. “All My Life” is based on a simple desire: to wake up every morning and go to bed every evening, the implication being that the timetable’s flipped. The lyrics are about escaping from a life of carousing, but it’s arranged as a barroom singalong, reeking of the camaraderie that explains why drunks like Nilsson and Lennon can feel comfortable letting their condition to slip into ugliness. The laugh at the end of one verse isn’t the cackle of a solitary madman but the giggle of two men who’ve just gotten away with something, and the wordless vocals on the chorus sound like a noise you might make when you’re tickling your partner. You could comb over its homoerotic implications for hours, but you don’t need to be a Freudian to hear how unwholesome it is.

Rock loves to celebrate misbehavior. Led Zeppelin’s predatory tour behavior has become shorthand for the rock-star dream, and the younger you die the better a shot you have at having your face on a dorm-room wall. There’s a chance you’ll come out of Pussy Cats envying the consequence-free lifestyle rich rock stars were allowed to enjoy in those days. But if the album mythologizes this lifestyle, it’s in the way drinkers mythologize themselves, never mind what the rest of the world thinks. Under this school of thought, a blown vocal cord is just another consequence to ignore.