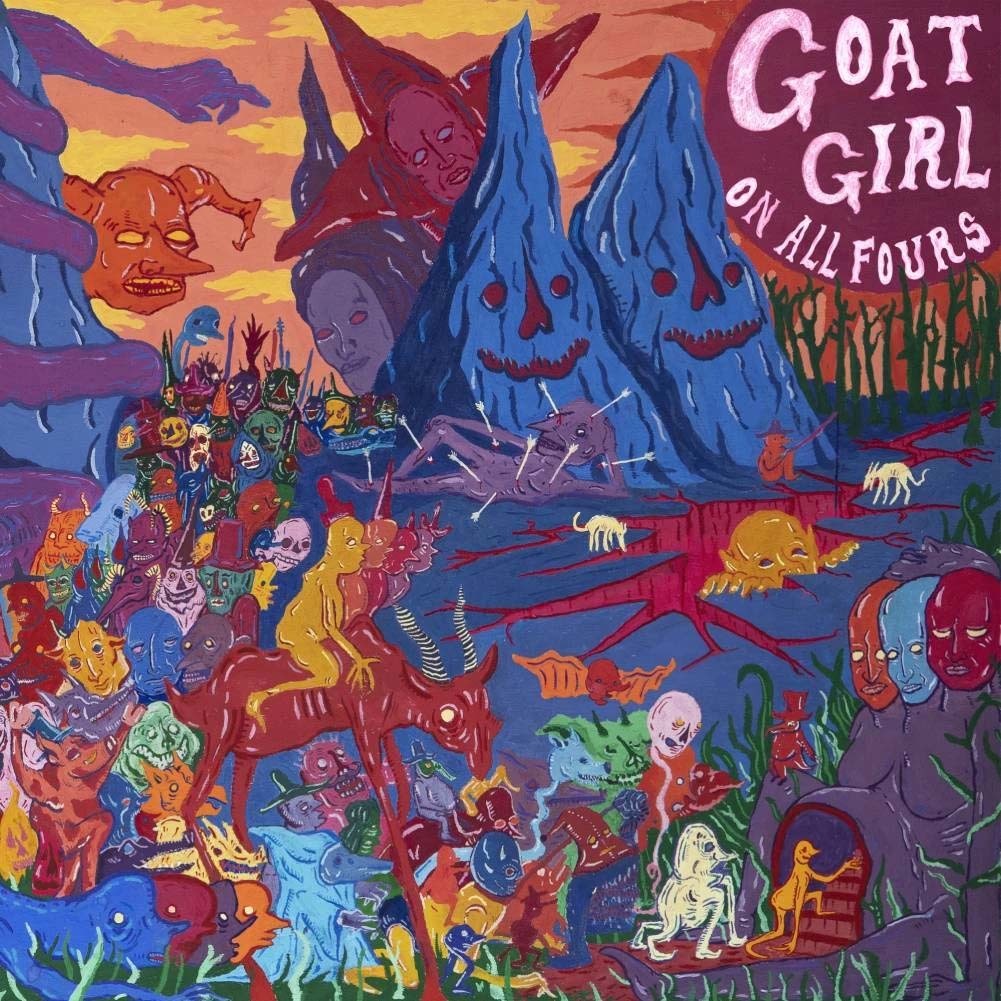 The Goat Girl that’s releasing On All Fours is not the same band that arrived with their self-titled debut in 2018. It’s been a traumatic and transformative three years for the London four-piece; guitarist L.E.D. was diagnosed Hodgkin lymphoma, thankfully now in remission. Her illness, combined with political upheaval, left the group shaken but more determined and outspoken.

Goat Girl was filled with woozy songs, many of which blitzed by in less than two minutes. There was a mellow, unhurried approach that cultivated a sense of anything goes – punk in demeanor more than style. On All Fours finds fresh ways to keep you guessing, adding in synths not to smooth out their sound, but to further stretch its boundaries. At the same time, the lyrics are more direct and take aim at the plagues of the world and the band members’ inner psyche. The result is a record anchored by strong songwriting that gives the band room to head out into some strange and refreshing territory.

You can hear that new approach right off the bat on “Pest,” with its gently strummed guitars and Star Trek effects, like a mysterious object descending into the atmosphere. As the band kicks in, the track turns into a slice of upbeat pop rock, with bubbling synths and vocal tradeoffs that give off a Ronettes vibe, though with withering glare. “Once Again” bolsters sparse, clean guitar work with animated percussion by Rosy Bones and a chorus that drops to just a synth melody and Lottie Cream’s voice. “Bang” weaves guitars and synths around each other until an earworm chorus cuts through.

Other tracks go even further afield. “Jazz (In The Supermarket)” fuses a playground synth melody with scratchy guitar notes, an endlessly appealing loop. When the brass kicks in though, the track gets cinematic, sounding like a movie anthem from an alternate, weirder universe. “A-Men” is propelled by unorthodox rhythm, bright guitar by L.E.D. and a walking bass line by Holly Hole, all three of them locked in a chill jam session, with blares of trumpets and cutting strings following them to the end.

The best songs on the record though combine unexpected musical cues with cutting lyrics. “Badibaba” and “The Crack” both offer biting takes on climate change denial. On the former, over a jangly riff, Cream sings, “Carry on/ Like we’re protected/ As if/ We’re unaffected,” the consequences of our inaction haunting us. Halfway through, the music collapses in on itself with stuttering noises of repetition, like a party suddenly devastated by catastrophe. The latter explodes out of the gate with distorted guitars that rattle like a slammed door. It’s a tale of humanity having to leave a devastated Earth behind, having failed to heed Mother Nature’s warnings. “The crack was singing protest songs/ The people wouldn’t listen, they didn’t care,” Cream sings sadly.

The band’s reflections on mental health are equally impactful and memorable. “Sad Cowboy” finds Cream losing her grip on a reality that already often leaves her disillusioned. “Slippin’ my hold/ It comes and it goes,” she sings as fuzzy guitars buzz. Touches of synths gradually build throughout the song, before breezing effortlessly into an atmospheric electronic breakdown ala “Born Slippy.” “Anxiety Feels” finds Cream caught between panicky tension and a solution that threatens to deaden her emotions. “I don’t want to be on those pills/ Heard they make you numb,” she sighs. The music embraces the sensation, puncturing dazed instrumentation with clear, awakened choruses, like splashing your face with cold water.

Goat Girl also dedicates some well-earned ire towards the cruelty of bias and capitalism. “P.T.S.Tea” is about the lack of respect Bones experienced from others over her identity as non-binary through a story of getting burned with hot tea by someone who refused to apologize. “There’s something in your eyes/ You’re looking for the prize/ That’s not me,” Cream sings as backing vocals repeat “Don’t burn me,” a look at how refusals must sadly too often be accompanied with pleas against violence. “They Bite on You” likens mites to the consuming presence of capitalism, though the music lacks punch.

The only other weak moments are found on “Closing In” and “Where Do We Go?” – neither offer much new or as ear-catching as the other tunes here. But besides those few flaws, On All Fours is an excellent follow-up that both finds greater focus and a greater sense of experimentation than their debut. Their easy-going vibe from the first album has been replaced with a fearlessness to let their music and muses take them, and us, wherever they want. May there be many more evolutions and expansions found in Goat Girl’s future.