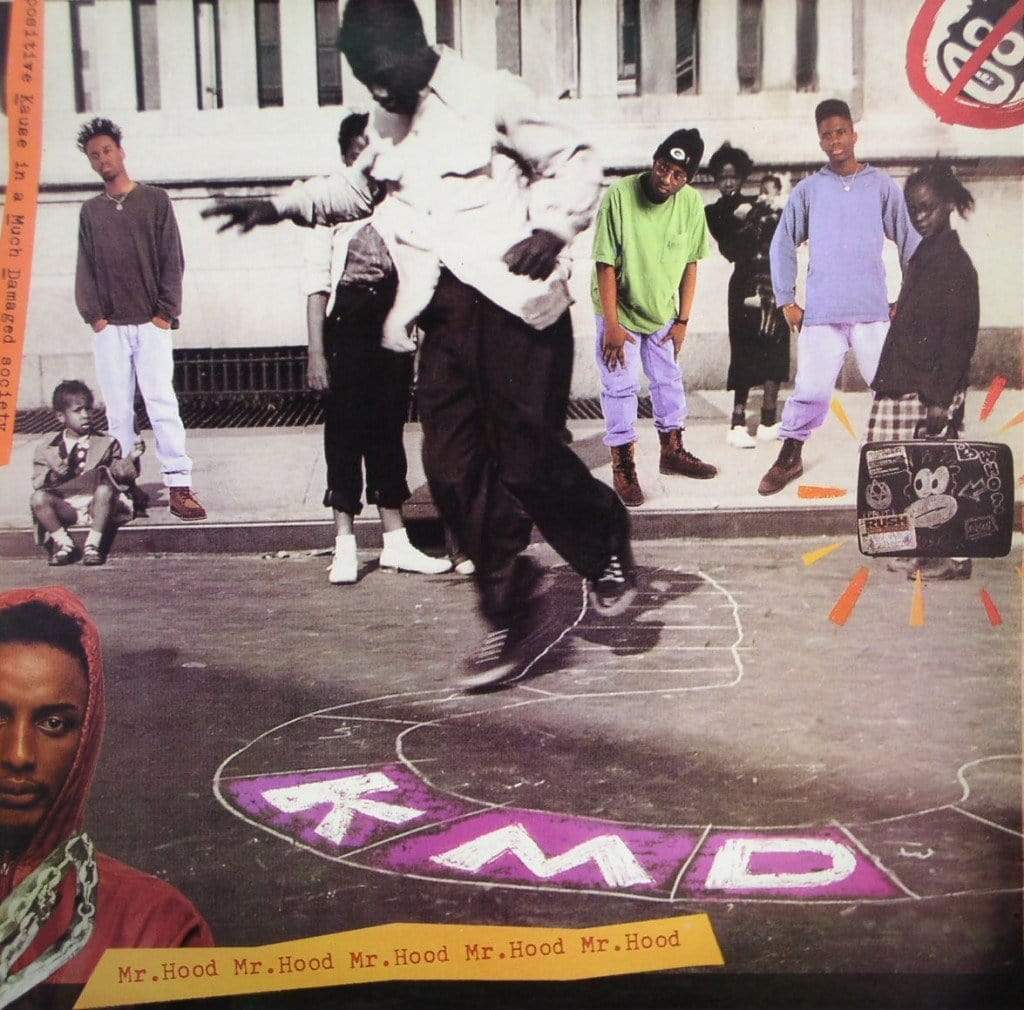 Back in the ‘80s, three kids from Long Beach, having already dabbled in graffiti and breakdancing, decided they were going to start a rap group. The trio – brothers Zev Love X and DJ Subroc, as well as their friend Onyx the Birthstone Kid – would call the group KMD, or Kausing Much Damage. In a vacuum, KMD weren’t exactly what you’d call “groundbreaking.” Full of cartoony samples that pad out admittedly pretty good (if rough) rapping, the group’s debut, Mr. Hood is another in a long pedigree of hip-hop records that badly needed an editor. We’ll get to all of that, though – the music within it is less important than what it represents. What makes Mr. Hood important is the fact that it’s the beginning of the career of one of hip-hop’s most important voices, one known by many names: Daniel Dumile, Zev Love X, Viktor Vaughn, King Geedorah, and – most important of all – MF Doom, the metal-faced supervillain.

Every supervillain needs an origin story, and KMD was the genesis point of everything that would come from MF Doom’s career – though Mr. Hood is less Batman Begins, more Joker. We don’t get to see the MF Doom anywhere on it, even though he refers to himself as “Doom” on “Figure of Speech,” here more a nickname based on the Dumile surname than anything. In fact, it’s best to listen without even really thinking about the fact that KMD was helmed by Doom; this is Zev Love X, after all. But even taking into account who helped make it and who rapped on almost every track, it’s difficult to draw a sonic line from here to, say, 1999’s Operation: Doomsday, the first album under the MF Doom moniker. His flow is decent, but even his distinct baritone is completely missing, the commanding voice hip-hop lovers would grow to know and love only audible if you squint. This isn’t really that surprising – he was no older than 19 when he and his friends made Mr. Hood and 28 when he recorded 1999’s Operation: Doomsday. That’s a whole lifetime’s worth of experience in just eight years, long enough for the dorky young Black teen in glasses and an “X” baseball cap from KMD’s hyper-corny promo photos to turn into a rapper for whom the label of Greatest of All Time isn’t hyperbole – it’s a foregone conclusion.

Despite this, while Mr. Hood is a fun album, it’s only ever just good. It has a number of memorable songs – “Peachfuzz,” “Humrush,” and “Figure of Speech” spring to mind immediately, as does the Brand Nubian-featuring “Nitty Gritty.” The best of them, the incendiary, Gil Scott-Heron sampling “Bananapeel Blues,” gives us the strongest taste of Black frustration on Mr. Hood, feelings that would come to a head with the more raw, more politically-charged BL_CK B_ST_RDS just a couple years later, with Zev quoting the Book of Genesis and questioning the logic of white supremacy. They’re all rough gems, but the promise in the group shines brightest on these songs, letting us glimpse something beyond the bored Long Island teens who stumbled their way into getting signed to Elektra Records before they were old enough to drink. That promise was strong enough that Dante Ross, the A&R man for Elektra who discovered them, even turns up as a guest producer on “Boogie Man!” and “Humrush,” a fact that helps hammer home the fact that Mr. Hood is less an album and more a group hang that evolved into an album.

Even when the songs aren’t quite barn-burners, they’re still pretty damn enjoyable – again a testament to the power of exuberance. Even the most inessential tracks are full of excellent chemistry, carrying songs like “Who Me? (With an Answer from Dr. Bert)” (a song with an honest-to-god “Sesame Street” sample) and “Hard Wit No Hoe” to higher heights than they’d reach on their own. And then there’s the trio of songs concerning the titular Mr. Hood – “Mr. Hood at Piocallee Jewelry,” “Mr. Hood Meets Onyx” and “Mr. Hood Gets a Haircut” – which sees Zev and the boys playing the role of a bored Kevin McAllister, constructing conversations with samples of language-learning tapes to create the character.

Oh, but the editing that they needed! Mr. Hood is over an hour long, with little filler. But just because a song isn’t “filler” doesn’t mean it belongs on the album, and while songs like “Who Me?” and “Subroc’s Mission” are fine songs, it doesn’t actually feel like the first five songs are at all essential. But when the group are on, they’re on – and the triple threat of “Humrush,” “Figure of Speech,” and the “Bananapeel Blues” presents us with the clearest portrait of their strengths as a unit – to say nothing about the fact that this triptych is followed by the Brand Nubian-imbued “Nitty Gritty,” a track that’s fun enough that you’ll walk away wondering why these two groups didn’t make a whole damn album together. But, then, you hit something like “Preacher Porkchop” or “Hard Wit No Hoe,” and you’ll probably find yourself rushing for the skip button.

We’ll get to the complicated fate of KMD in the next Discography feature, where we’ll explore the legacy of BL_CK B_ST_RDS, but it’s easy to wonder what the legacy of the group would be had the events surrounding it not led to Dumile shedding the persona of Zev Love X to adopt the metal mask, looking to enact vengeance on, in his ludicrously villainous words, “the industry that so badly deformed him.” Today, we as listeners are only able to see Mr. Hood as a piece of MF Doom’s genesis story. It’s hard to know if this is the best fate for it. We can’t help but look for glimpses of the supervillain in these songs, which means it’s difficult to enjoy the album based solely on its own merits – even though removing the context makes it all too easy to imagine Mr. Hood being left in the discount record store bins of hip-hop history, just another so-so album elevated by a few choice tracks.