In retrospect, it feels inevitable that David Cronenberg would eventually adapt J. G. Ballard. Though not exactly a writer of body horror, Ballard specialized in a vision of the near-future that tracked with much of Cronenberg’s style: a world of gleaming but sterile perfection, cold modernity masking an increasingly fraught, irreconcilable contradiction for the human misery and repressed loathing behind steel and glass. Ballard gained notoriety with taboo-shattering short stories that treated the JFK assassination as a both a spectator sport and realization of a displaced sexual longing (a theme he returned to by way of various grotesques of celebrity worship), and Crash was his most unified statement against a world that had so drained human life of all messy pleasures that libidinal ruptures manifested as abhorrent, violent fetishes.

By the time Cronenberg adapted the novel, he too had matured his early, gory work into still-pungent but nonetheless refined studies of the anxieties at work on mankind’s souls. The film is set in present-day Los Angeles, but the city looks dystopian; whether skylines seen from expensive high rises or rotting concrete apses beneath the city’s circulatory system of expressways that the characters traverse in search of some kind, any kind, of basal thrill. In a city defined by the solitary experience of private transit by car, identity is so wrapped up in one’s vehicle that Cronenberg shows LA as effectively a sprawling series of roads to be traveled to no particular end, tethering modern urban dread and meaningless to being dependent on a luxury item. 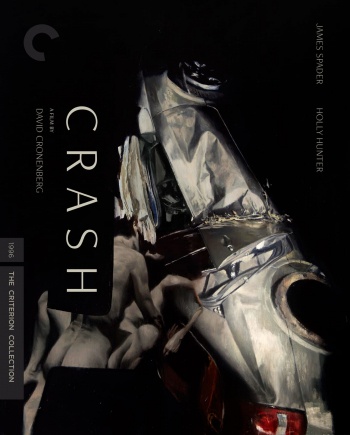 The speed with which Cronenberg establishes the city as a spiritually barren realm allows him to just as quickly set up the story. The protagonist, film producer James Ballard (James Spader), is in a loveless marriage with Catherine (Deborah Kara Unger), and the two regularly conduct affairs and consult with each other about it with the dispassionate tone of scientists comparing notes. Each has become so numb to the world that they don’t even receive gratification from sex with anyone, and their trysts could be said to be a mutual quest for orgasm. James has an unlikely breakthrough one night when he is involved in a fatal car crash that kills the other driver and exposes the breast of the man’s wife, Helen (Holly Hunter). In an instant, the sex and death drives fuse, causing James to be increasingly drawn to the fetishistic properties of human bodies mangled in collisions.

Spader, no stranger to characters exhibiting an anhedonic relationship to the world, underplays James’s budding fascination with bent metal and scar tissue, and the other actors follow suit. Even when James and a similarly affected Helen become an item and uncover an entire underworld of fellow crash fetishists, the putative movement’s theatrical ringleader, Robert Vaughn (Elias Koteas), has a detached quality that pitches his obsessive need to recreate famous crashes from history as clinical fascination. By deadpanning their characters’ interest in this macabre form of sexual release, the actors highlight the desperation and loneliness that, paradoxically, brings them closer together.

Even more than The Fly or Dead Ringers, which suggested new depths to Cronenberg’s grasp of horror but still piled on the nastiness, the gruesome malleability of the human body is sublimated here into a subtler kind of abhorrent beauty. Casts and crutches subtly mirror the fixation of flesh and steel colliding, and fetishism is borne out through, say, a surgical scar on the back of a woman’s leg that resembles a vulva. While the extent of characters’ scarring is exaggerated, Cronenberg trades his erstwhile interest in pulsing tumors and bursting skin for something closer to reality, calmly questioning the extent to which our bodies still belong to us in an empty commercialized world and whether destroying something is the only way to say we ever really possessed it in the first place.

It was inevitable that Crash would cause a fuss, and no sooner did it premiere at the Cannes Film Festival than it became such a lightning rod that jury president Francis Ford Coppola himself furiously exercised a veto of it being considered for the Palme d’Or, a presumption that so pissed off the other jurors that they invented an award just to give Cronenberg. In a way, that seems the perfect tribute to the director, whose visual sense and clear stamp of authorial intent (even with adapted material) is obvious enough to make it into a festival like Cannes but whose interest in the questions others would prefer not to ask could provoke an outright schism even in other artists. Yet for all the controversy, in the end this is one of the most poignant depictions of that most cinematic of feelings: alienation. What begins with a married couple wistfully intoning “maybe next time” about their inability to climax ends with them reunited against the side of an overturned car, muttering the same phrase with the same sense of longing in the hopes that the next crash may kill them.