World War II, as a milieu, has long been a playground for filmmakers inside and out of the Hollywood system. From big-budget fantasias with immeasurable body counts to painfully intimate survival stories, the Second World War is a fecund backdrop for every sort of tale, even the occasional comedy. But after bearing witness to Come and See, Elem Klimov’s 1985 antiwar masterpiece, it is difficult to return to any movie that makes light of the carnage that claimed more than 75 million lives worldwide between 1939 and 1945.

For most cinephiles, Come and See carries with it a reputation for brutality, the same sort of whispers that surround movies such as A Clockwork Orange and Salò and scare off squeamish viewers. But while the viciousness in those films could be considered questionable, Come and See begs of the viewer – “How can we watch a war movie and not be disturbed by its atrocities?” and “How could mankind descend to such levels of depravity?”
Adapted by Klimov and Ales Adamovich, Come and See focuses on the horrors the Nazis inflicted on Belorussia in 1943. Known today as Belarus, two million people died in this region as the Nazis marauded through, completely razing 628 villages and murdering all their residents. Klimov, a survivor of the war, and Adamovich based their screenplay on the true accounts of what happened, adding an even more tragic layer to their harrowing story. 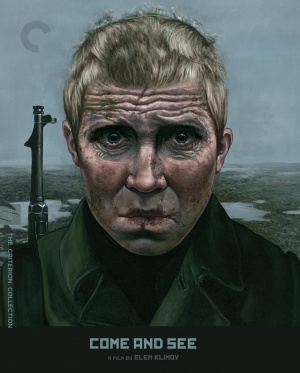 We first meet our young protagonist, Flyora (Aleksey Kravchenko), as he and a companion dig on a deserted beach. They are in search of weapons so they can join the Soviet partisans fight against the Nazis. Flyora eventually locates a rifle hidden under the sand, one he keeps with him for the entire film, but does not fire until the very end. Much to the chagrin of his mother, Flyora leaves his village behind and takes up with the partisans who are hiding in the woods nearby.

Life with the partisans isn’t what Flyora dreams and soon he is left alone with the beautiful Glasha (Olga Mironova), a young girl who is a few years older and in love with the leader of the partisans. But the pair have a brief respite together in the woods, an Edenic interlude of shy glances and tenderness. At one point, Glasha jumps onto a suitcase and dances for Flyora. We know the war looms just beyond the trees. This innocent romance should be Glasha and Flyora’s story, not the casket of horrors that await.

Come and See takes its time to truly take hold. The Nazis, at first, are represented only by airplanes droning overhead, indiscriminate bombs and bullets fired from far away. When Glasha and Flyora return to his village, only Glasha sees the piles of bodies left behind by the Germans in a quick glimpse. But when Flyora and Glasha separate, and he sets off with three of his countrymen and a grotesque of Adolf Hitler effigy, Come and See crosses the River Styx and into the unimaginable.

Klimov originally intended to call the film Kill Hitler before settling on Come and See, a seemingly innocuous imperative that is actually pulled from a dark passage in the Book of Revelations. He invites us to come and see the atrocities man has committed against man and nothing is more harrowing than the final sequence when the Nazis push all the residents of a small village into a barn and set it on fire. As a coming-of-age tale, which Come and See certainly is, there are no rites of passage achieved. Inside, Flyora is scorched into adulthood by the very act of witnessing. And while it appears the film is shot from his perspective entirely, we also curdle like the poor young man’s visage, which takes on wrinkles and the horrified stare of someone who has seen the devil.

In a gut punch of finale, Fylora shoots at a picture of Hitler floating in mud. As he empties his cartridge into the photo, Klimov cuts in real-life footage of the Führer giving speeches, smiling with children, taking us backwards in time, past photos of a young fascist in Munich until finally setting on an image of Hitler as a toddler, perched on his mother’s knee. Just like Fylora, the baby stares at the camera in blank indifference. Is evil inherent in some men or is it something learned? Can we search for meaning in that child’s eyes, or is it a fruitless exercise? They say war is hell, but very few films make that saying true like Come and See.

As a nation, we cannot outrun the violence on which America was founded. It is inherent in…