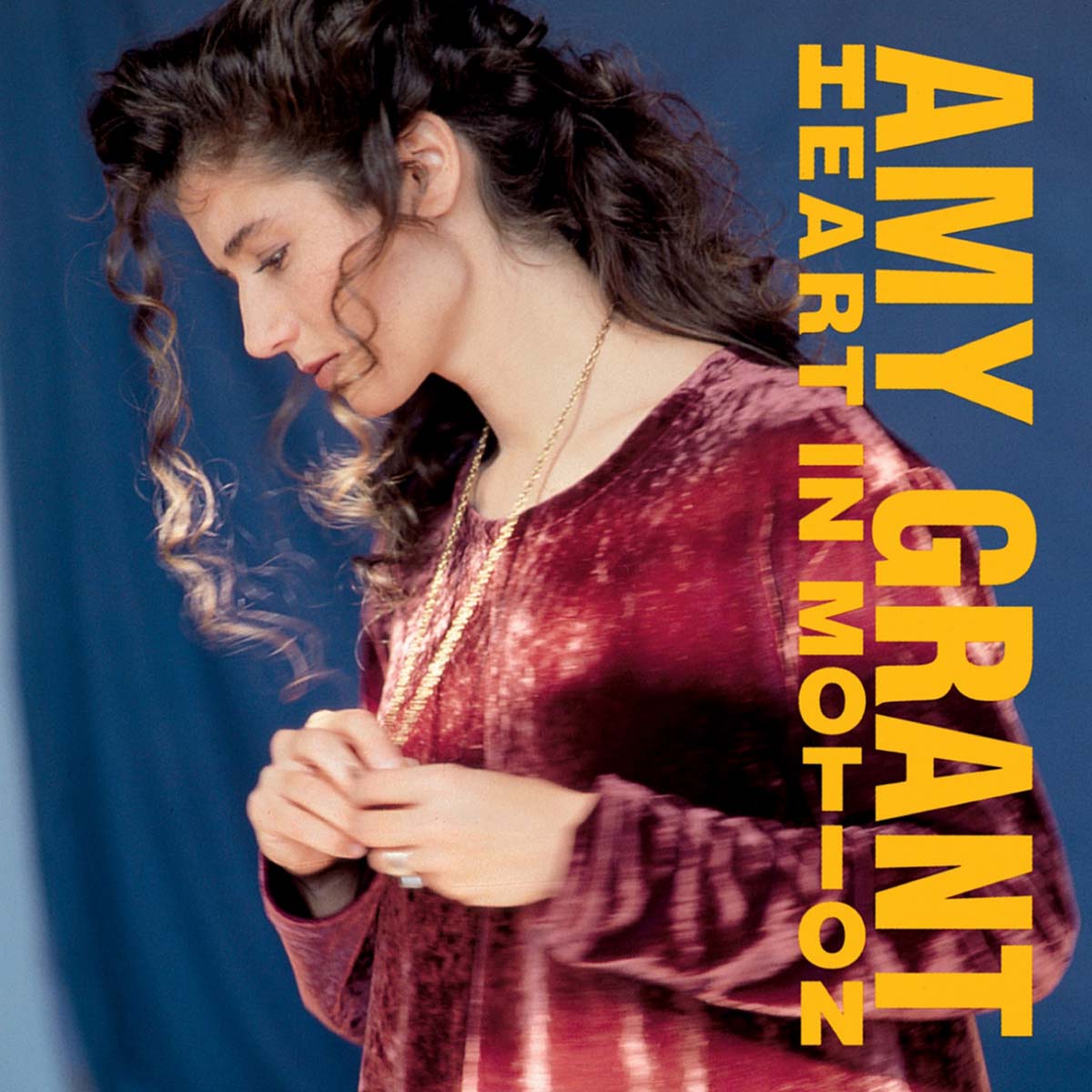 In an ’80s music landscape dominated by the female sounds of Madonna, Janet Jackson, Sheena Easton, Belinda Carlisle and Paula Abdul, another young woman named Amy Grant was busy taking credit for bringing contemporary Christian pop into the mainstream. Indeed, dubbed “The Queen of Christian Pop” by the mid-‘80s, Grant had achieved six number-one albums on the Billboard Christian Albums chart and collected five Grammy Awards for Best Gospel Performance. But following the success of her seventh album Unguarded as well as her collaboration with Peter Cetera, “The Next Time I Fall”—which would reach number one on the Billboard Hot 100 in 1986—Grant began reaching toward a sound that didn’t necessarily fit her religious roots. The end result would be 1991’s Heart in Motion, the first and ultimately last of Grant’s records to not be officially classified in any Christian music genres.

“When I start to sing the blues/ You pull out my dancing shoes/ I think you could be so good for me,” she sings on album opener “Good for Me,” setting the stage for a musical experience prepared to draw from dance-pop rather than sacred worship. In fact, the only track on Heart in Motion that contains overt references to Christianity is “Ask Me,” in which the singer wants us to ask how she knows there’s a higher power up above: “She’s coming to life again/ He’s in the middle of her pain/ In the middle of her shame/ Mercy brings life.”

Rather than seeking to preserve one’s Christian morals or purity by any means necessary, Grant’s music has always sought out to comfort the lost souls who might just need some reassuring words. On Heart in Motion, she combines that goal with a burgeoning sense of femininity that refuses to keep itself hidden any longer. Are the Christian music critics who still refer to “Baby, Baby” as a sellout aware that the singer actually wrote the hit single about her infant daughter? “And ever since the day you put my heart in motion/ Baby, I realize that there’s just no getting over you.” And while the message of collective togetherness on “You’re Not Alone” does get a bit lost in the dated production, it surely set the stage for Sheryl Crow’s “Everyday is a Winding Road” or Avril Lavigne’s “Keep Holding On.”

In a culture that would later praise the angry lyrics of Alanis Morissette, Paula Cole and even Natalie Maines, Grant’s yearning to redefine the rigid boundaries of contemporary Christian pop in the early ‘90s still resonates. Heart in Motion would go on to be Grant’s most commercially successful album, becoming her seventh number-one record on the Christian Albums chart as well as her first top-ten record on the Billboard 200, and marking her first Grammy nomination for Album of the Year. But between the lines, Grant was still somewhat quietly pushing boundaries and the blockbuster success of the album perhaps represents a very small, retrospective step forward for women taking control of their own narratives—but a step forward nonetheless.

Grant’s sound and lyrics on Heart in Motion are nowhere near the angry alt-rock girls that would appear later in the decade—more like comforting white girl pop meets new jack swing—but her quiet defiance and rebellion against the confines of Christian music by merely embracing her womanhood places her in solidarity with them regardless. On “Hats,” the album’s most forgotten and underrated offering, the singer contemplates the many facades, or hats, that women are forced to wear on the daily: “One day I’m a mother/ One day I’m a lover/ What am I supposed to do/ Workin’ for a livin’/ All because I’m driven/ To be the very best for you.” Of course, most if not all of Grant’s lyrics seem remarkably tame in comparison to someone like Meredith Brooks later explaining how she’s both a sinner and a saint and she does not feel ashamed. But however small, quiet, or watered-down the singer’s noncompliance was, Heart in Motion helped to begin smashing the notion that women have to wear so many hats as feminism entered its third wave: “The spirit is willing/ But the flesh is weak/ Why do I have to wear/ So many things on my head?”

Grant would continue pushing the envelope in Christian music with her follow-up albums House of Love and Behind the Eyes, but a controversy that ensued following a bitter critic writing that explicitly Christian lyrics were “completely absent” from the latter in 1997 resulted in the Gospel Music Association adopting content requirements for their annual Dove Awards. The singer had already faced backlash from the Christian community in the United States for her partnership with Target in the ‘80s—the chain’s parent company, Dayton Hudson, supported Planned Parenthood. Grant never made much of the controversies that had followed her (“I always kind of assumed that it is part of human nature to misunderstand people and assume the worst”), but after the continuous upset her mainstream pop albums had caused as well as a divorce and remarriage, she reluctantly returned to her roots in 2002 with an album of classic hymns. Grant has made peace with her artistry in middle-age but she nevertheless remains a trailblazer for young women who don’t want to be tied down to one definition.

Criminally Underrated: Message in a Bottle