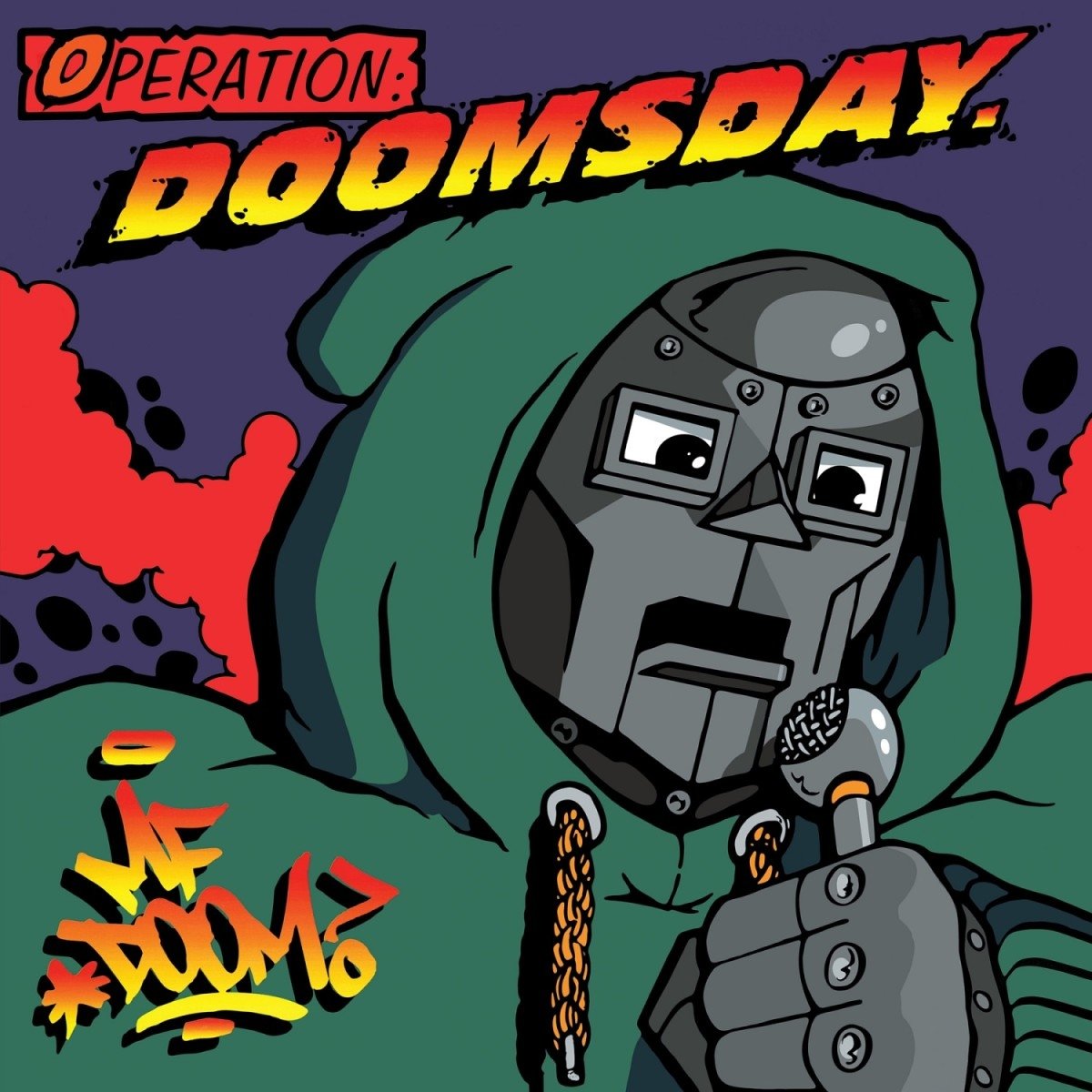 With all due respect to another supervillain, it would be untrue to say that no one cared who Daniel Dumile was until he put on the mask. After an 18-year-old Dumile—then known as Zev Love X—landed a guest verse on Queens hip-hop trio 3rd Bass’s 1989 hit “The Gas Face,” Elektra Records signed the young rapper’s group, KMD, releasing their debut Mr. Hood in 1991. Dumile even appeared before a Senate committee that year, urging them to pass a voter registration bill on behalf of Rock the Vote. But tragedy struck when Dumile’s brother and musical partner DJ Subroc was hit by a car and killed in April 1993; Dumile finished KMD’s follow-up, Bl_ck B_st_rds, on his own, only to be dealt another blow exactly one year after Subroc’s death when Elektra decided to terminate KMD’s contract rather than release an album with a cartoon lynching on its cover.

The five years that followed are shrouded in mystery. Hip-hop on the East Coast flourished amid a thriving indie scene and a rivalry with the West Coast, but Dumile wasn’t part of it. He once claimed to have been “damn near homeless, walking the streets of Manhattan, sleeping on benches and shit,” though he later dismissed his own words as mythmaking. He drifted down to Atlanta, where his parents lived. Then in late 1997, a faceless figure began appearing at open mic nights at the Nuyorican Poets Café on the Lower East Side—sometimes covering his head with a stocking, sometimes with a luchador’s mask. Fondle ‘Em Records, the label run by New York underground hip-hop impresario Bobbito Garcia, issued a trio of singles—“Dead Bent,” “Greenbacks,” “The M.I.C.”—all attributed to an MF DOOM. Hip-hop heads who’d been lucky enough to find bootleg copies of Bl_ck B_st_rds were shocked to hear the resemblance between Zev Love X’s voice and that of this MF DOOM character: Could it be the same man who’d been broken by the music industry all those years ago?

Indeed it was. Dumile looked to his childhood to forge his new identity, drawing on his love of comic books as well his nickname, “Doom”—a moniker he shared, of course, with one of Marvel Comics’ greatest supervillains, Doctor Doom. He’d always been drawn to the metal-faced malefactor, but now he could relate to him: He had suffered an agonizing loss of a loved one, and sworn vengeance against those who had cast him out and spurned his genius.

With all of this in mind, it would be understandable if Operation: Doomsday, Dumile’s first full-length statement as MF DOOM, were a forbiddingly dark affair, full of harrowing tales from the brink and violent threats against his perceived wrongdoers. But it’s unclear exactly how many listeners had this in mind when they first heard Doomsday, either upon its release in 1999 or in the more than 20 years since. Nevertheless, it’s almost surprising how playful and fun the album is, right from its introduction, which heavily samples dialogue from Hanna-Barbera’s “Fantastic Four” animated series. Snippets of the cartoon appear in the album’s several skits, tracing Doctor Doom’s origins from his first encounter with Mister Fantastic to his donning the iron mask.

Make no mistake, however, that Doomsday is DOOM’s story, not Doom’s. The title track’s chorus offers a candid glimpse of the man behind the mask—

On Doomsday, ever since the womb
‘Til I’m back where my brother went, that’s what my tomb will say
Right above my government: Dumile
Either unmarked or engraved, hey, who’s to say?

—but outside of that, the song’s verses are pure shit-talking of a caliber that few, if any, above-ground rappers could match. “Stop and stick around, come through and dig the sound/ Of the fly brown 6’-0” sicko psycho who throws his dick around/ Bound to go three-plat, came to destroy rap,” he boasts. Minutes later, he makes a taunt out of the “no talking orangutans” catchphrase from the (now-defunct) Long Island baby furniture store Coronet before chugging a gin and juice with Tang—a brand whose advertisements in the late ‘90s actually featured talking orangutans. Even if you weren’t in on the joke, it’s a great bit of wordplay. Now that you know, the punchline is even funnier.

DOOM’s greatness as a lyricist can threaten to overshadow his savviness as a producer, and his affinity for old school hip-hop is plain to hear as he builds beats out of James Brown, as well as golden age greats like Criminal Minded and Kool G. Rap, across the album. His old school mentality also extends to the way he used samples, despite the fact that the legality of sampling was much murkier in 1999 than it had been a decade earlier. The breadth of sources that DOOM pulled from to make Doomsday is truly something: Kaiju film-scoring legend Akira Ifukube’s soundtracks for Ghidorah, the Three-Headed Monster and Invasion of Astro-Monster are mashed up, respectively, with the Beatles’ “Glass Onion” and the Deele’s “Shoot ‘Em Up Movies” on “Tick, Tick…” and “Red and Gold.” He draws from smooth operators like Sade (“Doomsday”), Steely Dan (“Gas Drawls”) and Quincy Jones (“Rhymes Like Dimes”), while “Hey!” takes the opening theme from “The New Scooby-Doo Movies” and twists it into an instrumental that’s somehow both endearingly cheesy and legitimately kind of eerie. (Sure enough, DOOM’s last line on the song is “meddling kids!”) Given the shoestring budget that Doomsday was surely recorded on, it sounds warmer and far more eclectic than you would expect an indie or underground rap album to, let alone one from the late ‘90s.

But even if DOOM’s return had drawn the attention of a larger label than Fondle ‘Em, it would’ve been a difficult fit in the musical landscape. For one, Doomsday was much artier and more bohemian than a gangsta rap album—it’s hard to imagine even the Wu-Tang Clan or Mobb Deep zigzagging from Five Percent Nation slang to Sidney Sheldon to Foxy Brown in a single verse as breathlessly as DOOM does. (Seriously, reading the lyrics to songs like “Doomsday” and “Rhymes Like Dimes” will make you grateful for Genius annotations—that, or you’ll have to open up half a dozen tabs just to understand all of the references.) His delivery has sometimes been called “stream-of-consciousness,” but the truth is that DOOM put too much thought into his free-flowing, free-associating words for such a descriptor to really make sense. All the same, it’s a joy to try to parse them, which is something that’s harder to say of much of Eminem’s output as of late.

On the other hand, Doomsday sounded bleaker and tougher than a conscious hip-hop album. Back in the days of KMD, the subject matter and style of Mr. Hood earned the group comparisons to De La Soul and A Tribe Called Quest. Eight years later, DOOM’s lyrics were darker and more nihilistic; where Zev Love X might have turned the street beatdown that opens “Red and Gold” into an indictment of violence, DOOM simply offers a pithy “Never tuck your denim in just to floss an emblem” before getting back to self-mythologizing. Where he once saw himself as a positive cause in a damaged society, now he only seemed to care about causing more damage—gunning down cops, starting fistfights in the club, engaging in the kind of sexual escapades that typically incur legal consequences. His declaration that “Rhymes is chosen like the weapons of war/ So keep from steppin’ on my floor or delivery front door/ I bring it to y’all motherfuckers master yours” on “Gas Drawls” resembles a statement of intent, a terrorist’s manifesto.

So it’s fitting that after telling us what his evil scheme is, DOOM ends Operation: Doomsday by reminding us who he’s doing it for. His final verse on “?,” the album’s penultimate track, memorializes Subroc, his “twin brother, we did everything together/ From hundred rakat salats to copping butter leathers.” It’s a strikingly vulnerable moment—perhaps the most unguarded that Dumile, under any of his names, allowed himself to be on record. “Truly the illest dynamic duo on the whole block/ I keep a flick of you with the machete sword in your hand,” he continues. “Everything is going according to plan, man.” For once, his words feel brittle and forced: How could anyone still believe in a plan after enduring the losses that DOOM had? (Sadly, they would not be the last.) Subroc was just 19 when he died—the same age that his brother was when he testified before the Senate—young enough to die a hero. DOOM lived long enough to see himself become the villain, and he embraced it. In so doing, became a hero to millions.