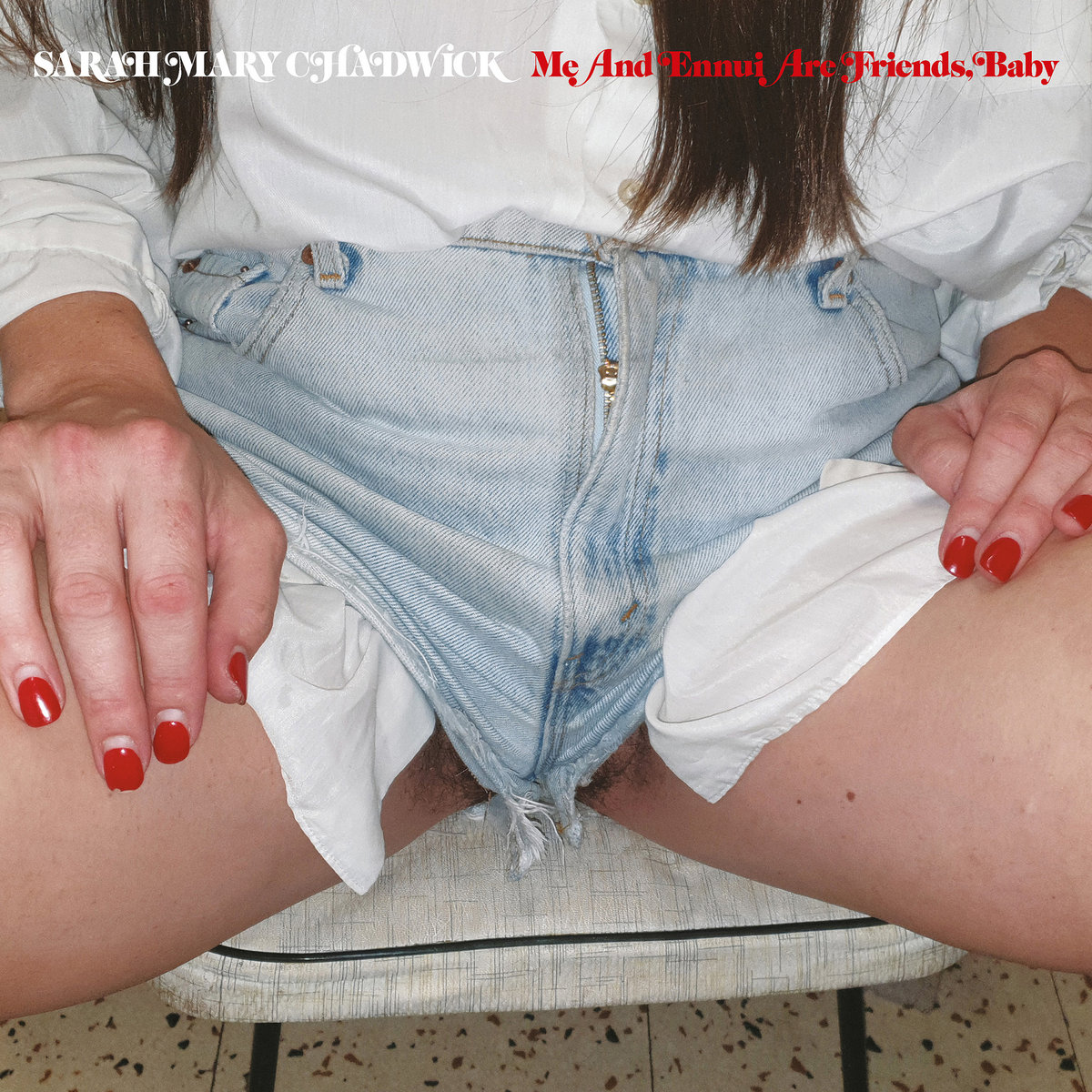 You walk into a record store, hungry for something you haven’t already heard a million times. This isn’t shopping trip to fill in gaps in your collection; it’s to feed a craving that exists deep inside you, one that’s almost impossible to actually touch without pure luck coming your way in the form of a friend’s recommendation. As you search the stacks, you find something: a segment of woman in jean shorts, her legs splayed, pubic hair protruding from the edges of the denim. You laugh to yourself, snap a photo of it for a friend, but move on – after all, why wouldn’t you? Who buys that? But do not do that. Do not move on. Pick that album up and take it to the counter and buy the record. You might laugh at that cover and half-heartedly marvel at how excellent the name Me and Ennui Are Friends, Baby is, but If you take that album home, you’ll find Melbourne-based singer-songwriter Sarah Mary Chadwick, her piano, and – well – her friend, ennui. That cover is a bit of a misdirect, one that makes perfect sense when compared to, say, the grotesquely filthy cover of her 2015 album 9 Classic Tracks. It’s almost a mean prank to pull on those who go into the album entirely uninitiated, because as the album title suggests, the star of the show isn’t Chadwick – it’s ennui, and she makes damn sure you know it’s there.

Grief and loss loom large over Me and Ennui. It’s not just about death – specifically her father and a close friend – but about the crumbling of a long-term relationship and her own suicide attempt. Instead of cloaking the sorrow that comes from this in a protective shield, she bares it all as fast as she possibly can: “Fathers always dying/ Baby that’s why you will/ Me and my broken heart/ Another day amongst the rubble,” she sings over her solemn piano composition on opener “A Mother’s Love,” her voice lifted in a way that makes it seem like she believes the piano to be far louder than it is, or in an effort to ensure she can be heard crystal-clearly. That stanza could be replaced with any from “A Mother’s Love” and would still capture the weight of sorrow we’re working with here. On “Me and Ennui Are Friends, Baby,” she’ll recount her own suicide attempt right down to letting you know the exact date she last tried it – and not before letting you know it wasn’t the first time. And then, there’s this: “You drag my clothes off/ I give you head parked at the lights/ I tell a select few dozen friends/ Hear from your wife.” It’s hard to look away from these moments, their often vivid imagery in a permanent state of structural nudity.

There will be listeners who can’t quite crack into Me and Ennui, and it’s hard to blame them. Each of these compositions is uncomplicated and threadbare in the same way that early Perfume Genius records were, seemingly only there as a wafer-thin vessel with which to consume Chadwick’s words – a water cracker carrying a delectable, but complicated, morsel of cheese. But then there’s her voice, forceful and unafraid to wail in her Australian accent – and, outside of her twinned vocals on “Don’t Like You Talking,” it remains entirely unadorned. Comedy and sorrow coexist within the same breath, a constant emotional roller coaster; marvel at the way she sings the hysterical/brutal reasoning for not letting her parents know she’d tried to commit suicide on the title track: “And I didn’t call my mum/ ‘Cause I hate that bitch/ And I didn’t call my dad/ ‘Cause the phone don’t reach where he is.” It’s like the cover of the album itself and what lies beneath: an outlandish way of luring you in before punching you square in the jaw, unannounced.

In spite of all of the soul-darkening sorrow that exists, it’s an immensely charming record. That she’s seen her way to feeling comfortable enough to share everything within Me and Ennui is a marvel, but an impossible-to-ignore love of songwriting floods every song, a fact that makes her self-deprecation endearing. Her self-awareness is, too: one of the most revealing verses on the whole album comes, again, on the masterful title track. “And maybe I should chill out on blaming my parents/ Forgivable at 25, it’s not cute at 37/ But maybe I’ll just pour my soul into another few songs/ The only time that I feel real/ The only time I don’t feel wrong,” she sings not too long after off-handedly mentioning that she hates her mum too much to call her about her suicide attempt. It’s also hard to ignore how much she revels in the art of imagery, painting us vivid scenes like “On my lawn in plain view like a burning cross/ Run your fingers over me my loves embossed/ Ran under streetlight ‘til my heart stopped” on “I Was Much Better At Being Young Than You Are,” or “There’s the wine/ And your eyes straight up decorate this room/ And the day like the tide/ Fucks off following the moon” totally effortlessly. Once you break through, there’s a lot to love.

Me and Ennui Are Friends, Baby is one of the best kinds of albums: totally unexpected in absolutely every single way. It does everything in its power to push you away, its actions belying a desire to draw the more gracious listener in – and once it has you, it refuses to let go. In a way, that ‘70s Hustler-esque album art is its own kind of shield against those who may not be willing to dig this deep into the emotions of a stranger. Don’t be the person who can’t look past it, though. No matter what the cover makes you feel, the things that the music beneath it will make you feel are far, far more rewarding than any laughs you’ll get from showing it to your friends.