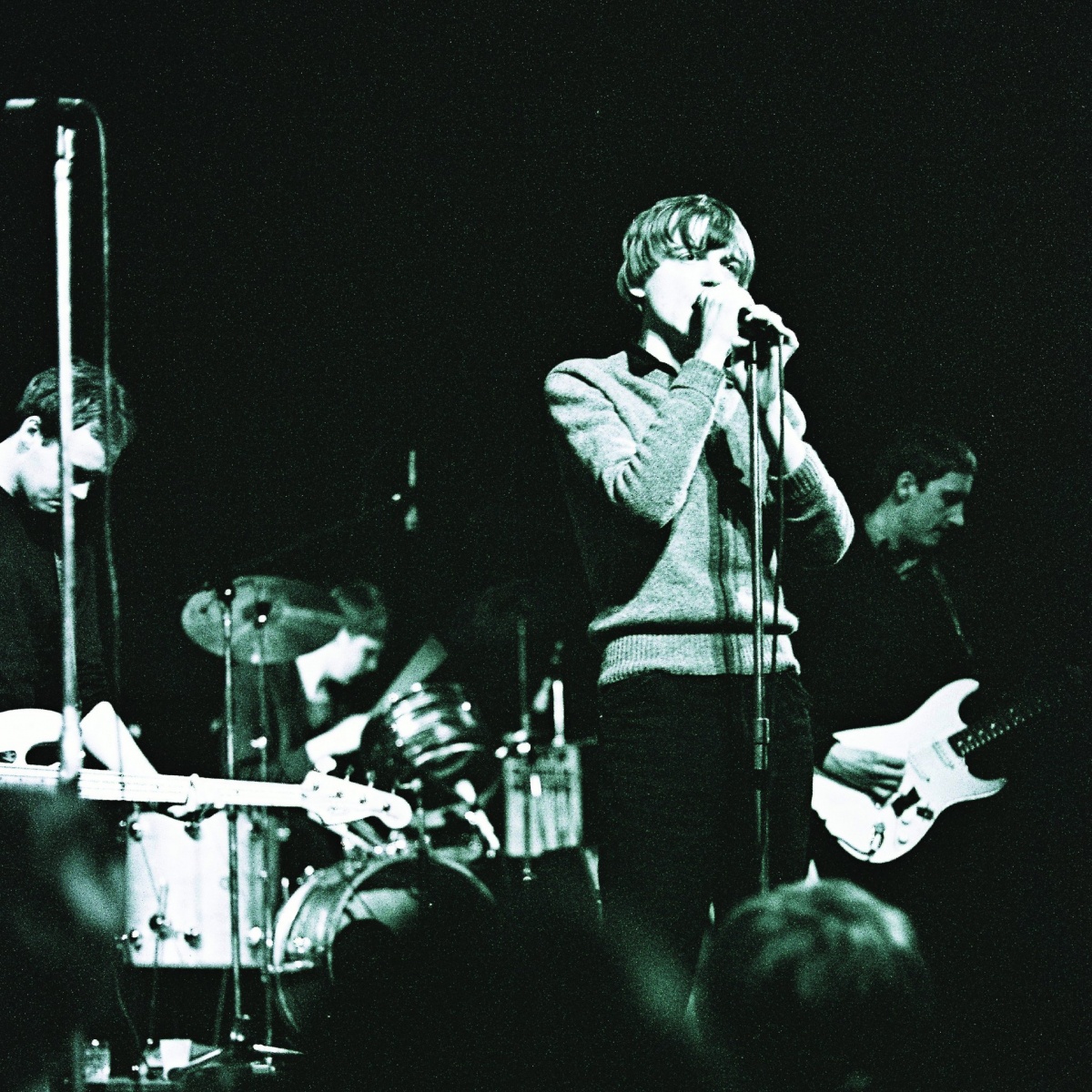 There are over 50 live albums by the Fall, but, as with artists residing at the opposite end of the spectrum from the spiky post-punk genre that the band is forever associated with, such as the Grateful Dead or Zappa, there can never be too many. Not every Fall gig was great ― or even tolerable, if you had the bad luck to be at one of their “standing in the rain being shouted at by an angry old drunk” festival appearances, but each was its own thing, and carried some of that indefinable essence that makes the Fall different from any other band. Even Kraftwerk sounds sentimental compared to the Fall, but it’s a lack of sentimentality that has nothing to do with toughness or heaviness or the dehumanized industrial bark of Throbbing Gristle or Killing Joke. Listening to the Fall at their best is a uniquely abrasive, cleansing experience perhaps best summed up by the titling of one of their more middling albums, 1995’s Cerebral Caustic.

For the last couple of decades of their long career, it seemed as though the Fall was Mark E. Smith, plus whatever musicians he hadn’t sacked yet. But it wasn’t always that way, and their best work was recorded when they seemed less like a surly, unpredictable manager and his cowed employees and more like a strange ― but not visibly “punk” ― and intimidating gang; which is the period captured on Live at St Helen’s Technical College, ’81. The band, with the help of then-manager, the eccentric Kay Carroll, really found its identity with their second album, Dragnet (1979) ― a chaotic, sometimes opaque mixture of gaunt, catchy oddities and cacophonous supernatural narratives ― and crystalized it with their first bona fide classic, 1980’s Grotesque (After the Gramme). That album ushered in the period of their most consistently inventive and incisive work, culminating in their fourth (but intended at the time to be their final) full-length, Hex Enduction Hour (1982), which remains entirely unlike anything else outside of the band’s own discography. Immediately preceding Hex… though, was perhaps the ideal introduction to the Fall, the utterly characteristic, deliberately too long to be an EP, but too short to be an album Slates (1981) ― plus a lot of touring, as captured on this newly discovered recording, found lurking in then-guitarist, now DJ Marc Riley’s archives.

The Fall as captured here ― MES, plus guitarists Riley (then Smith’s most visible foil/antagonist onstage) and Craig Scanlon and the unbeatable rhythm section of Stephen and Paul Hanley (bass and drums respectively) ― is arguably the closest the band ever had to a definitive lineup. Riley and Scanlon’s spindly, jagged guitars perfectly mirrored Smith’s indomitable ranting delivery (though he sometimes still tried to sing in those days too), with the Hanleys providing a framework that was both solid and elastic and let the band get away with pretty much anything, including occasional squeaks that presumably come from guest clarinetist Dave Tucker, who appeared sporadically during the band’s 1981 tour. It’s a period well documented by live recordings, most notably two official releases that capture the band outside of their usual environment; the slightly ragged A Part of America Therein, 1981 (1982), a collection of performances from various dates on the band’s unorthodox 1981 US tour and the uncharacteristically ebullient Fall in a Hole, ironically recorded just before that lineup imploded. Unlike those records, Live at St. Helen’s Technical College, ’81 finds them in the heart of the industrial north of England, albeit some distance from the band’s home turf in Prestwich ― but still in a sense on alien ground as, unique among UK indie bands of their generation, the Fall preferred to avoid playing university and college gigs whenever possible, due to Smith’s serio-comic dislike of students and academia. In practice, this wasn’t really a viable approach in the UK, at least for a band of their status, but it meant that they probably played more leisure centers and small sports halls than most of their peers.

Live at St Helen’s Technical College is far superior to A Part of America Therein, 1981, both in terms of the sound quality of the recording and because, as a full set, it has a dynamism and momentum that’s lost a bit in the edited highlights of the American album. Better, it’s easily the equal of Fall in a Hole, with an audibly enthusiastic and engaged, though not especially chatty Mark E. Smith leading the band through a selection of some of their greatest songs of the era, performed with power and precision. The set, recorded on the 20th of February, was not guaranteed, nor indeed designed, to be crowd-pleasing, comprising of all six of the tracks that would make up Slates, recorded that month but not released until April:“Jawbone and the Air Rifle,” which would eventually surface on Hex Enduction Hour in 1982; “City Hobgoblins,” a 1980 b-side; plus two-and-a-half tracks from Grotesque (After the Gramme) and ― possibly grudgingly ― two oldies. Perhaps appropriately, the band sounds tight and enthusiastic, but the audience sounds fairly muted, even to the near-definitive versions of classic Grotesque… tracks “The N.W.R.A.” and “Gramme Friday,” with only the noticeably more typically punk 1979 single “Rowche Rumble” getting anything like a rapturous reception. It’s fair to say that this apparent quietness is not just a sonic quirk of the recording; three days later at the Plaza in Glasgow, a more relaxed-sounding Mark E. Smith told the crowd; “We were in St. Helens on Friday… They’ve just discovered ’78 in St. Helens and they all interbreed anyway.”

Perversely, the band kicks off with a version of “WMC – Blob 59,” an obscure kind of manifesto for Grotesque’s submerged state-of-the-nation concept that was buried in the middle of the album’s second side. The studio version is a semi-indecipherable, minute-long collage of noise, speech and muffled music, laying out an oblique portrait of the haunted landscape of post-punk England that the Fall inhabited, a drug-distorted, perhaps diabolical vision of grotesque and joyless peasants, marked by the unglamorous landmarks of the park and the pub; “We come with our hands open in fiendship/ We can lead you to proletariat visions of posterity/ We merely make cabaret/ We are on Gramme Friday.” A fitting introduction of sorts, but in fact the live version is almost entirely different, sounding like a kind of country and western ballad, intoned over a near-dissonant backing reminiscent of early Sonic Youth, before morphing into a truncated version of the then-unreleased single “Lie Dream of a Casino Soul.” This then leads seamlessly into a thunderous version of a similarly unreleased song, “Prole Art Threat,” which would open Slates; another manifesto for Smith’s vision during that period, a rejection of all expectations of class, culture, pop culture and art. This is Smith at his most forceful and accusatory, but the crowd seems unconvinced. Clearly, it’s time for a crowd-pleaser; but in fact, what the band launches into is one of their bizarre narrative songs, and one that wouldn’t emerge on record for a year; “Jawbone and the Air Rifle,” concerning the accidental defiling of a religious sect’s tomb by a poacher(?). But it’s a confrontational strategy that certainly works now, whatever its reception at the time; superb versions of some of the band’s best new songs sustain a dynamic tension punctuated by the only older song in the set, “Rowche Rumble” and the unrequested encore of Dragnet’s “Muzoweri’s Daughter” (which, judging by old bootlegs, seems to have been transposed with “Slates, Slags, Etc.” on this album), both of which are different enough to relax the intensity of the show without derailing it entirely.

There are many Fall performances where Mark E. Smith berates the band, but thankfully this is not one of them; although tight and professional, it’s a group performance that is not without lightness, humor or improvisation, with a sniffly Smith declaiming, during an excellent lope through the drug-centric “Gramme Friday” ― “I am Robinson Speedo and this is my Gramme Friday, with a blocked up nose, what a paradox!” The album closes with the “definitive rant” of “Slates, Slags, Etc.”, an attack on Smith’s hate figures, the grey, unimaginative and conventional; people behaving as expected within the limits that society sets for them. As something like an affectionate nod to his audience, he extends the track’s cast of “male slags” and “dead publisher’s sons” to include “technical college rejects” before terminating the show with a terse ― but by MES standards, not unfriendly ―“goodnight!”

There may not be such a thing as a casual Fall listener, but even if you’re not a completist this may be the best live document of the band’s best period. If you are a completist, you obviously need this; but no caution is required, it’s one of the good ones.