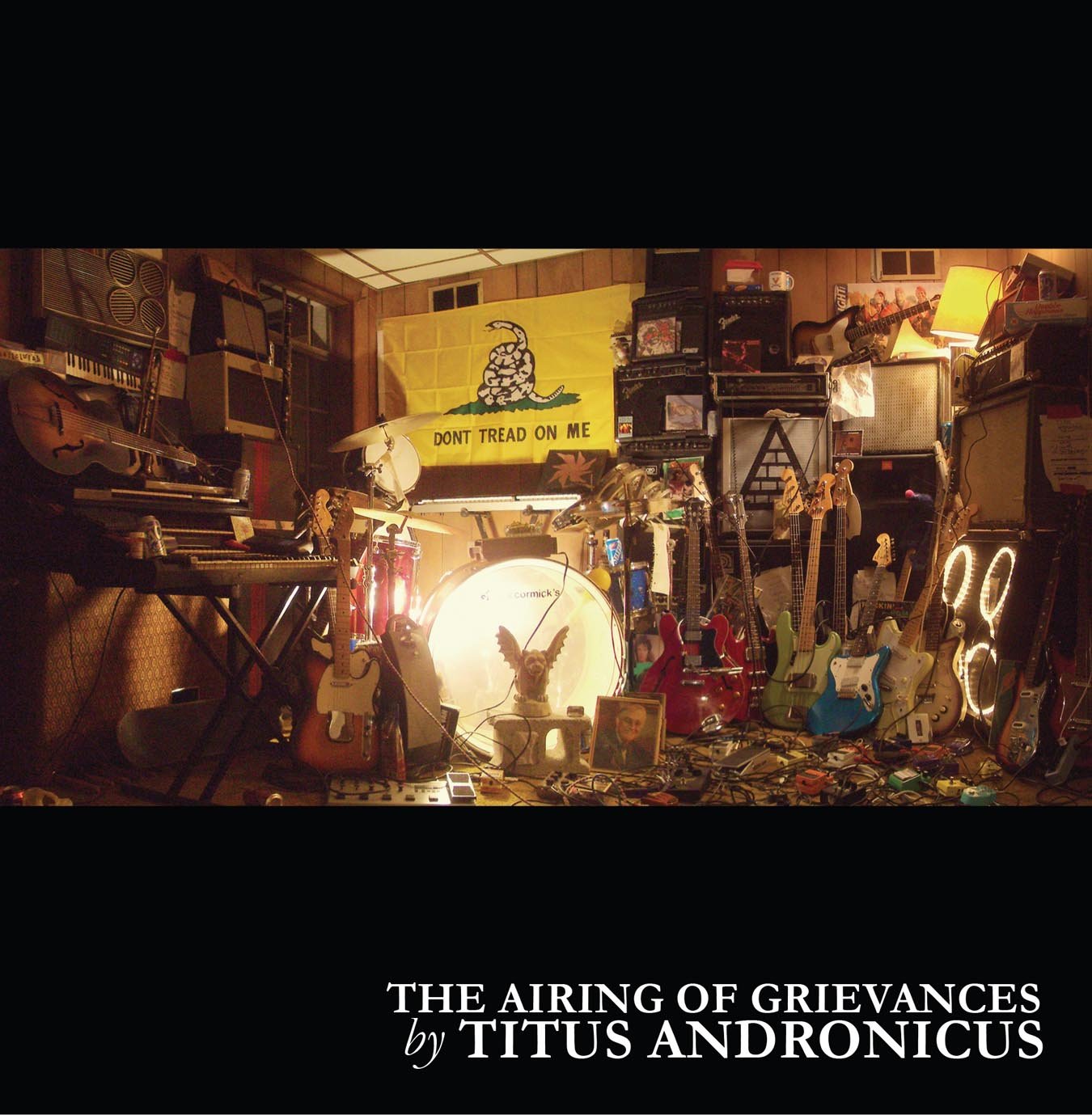 Titus Andronicus arrived defeated, late to the ‘00s boom when Arctic Monkeys and Arcade Fire were still considered indie rock. Today, the term is an amorphous genre tag and garage bands are comprised of cool dudes whose appeal is based on ignorance of proper shampooing techniques. Titus Andronicus were never cool–they were too self-important. But in their humorlessness burned desperation. They had the hedonism of punk, the vitality of Springsteen, the budget of canned mushrooms, the leanings of Camus; and they fought like hell to hide the fact that they feel like giving up.

Their 2008 debut The Airing of Grievances was the only time Titus Andronicus weren’t wrestling with their own reputation. Before The Monitor became a golden goose, and then an albatross around Patrick Stickles’ neck, Grievances was the first entry in a seven-year-run that included one decade-defining album, a rock opera worthy of its bloat and an underrated stomper. The debut was the purest Titus Andronicus package, defining the band in its moment and held forth as an example of what’s been absent since its release. That The Most Lamentable Tragedy, from 2015, concludes using the same cassette recorder used on the introduction of “Fear and Loathing in Mahwah, NJ” bookends the group’s narrative. Beneath the gloss and flora of late ‘00s indie rock, Patrick Stickles rolled around in musical feces, with whoever else he brought along that weekend to play with him.

Sonically the record is a quarter-life crisis set in a basement bedroom adorned with band posters and textbooks. Stickles drawls like his hero Conor Oberst. “Joset of Nazareth’s Blues” lifts the opening of Bruce Springsteen’s “The Promised Land.” “My Life Outside the Womb” jangles like R.E.M. in a template that would launch entire careers for acts like Mac DeMarco.

Much like a basement bedroom tape, the production is unfurnished and muddy. This thing sounds like shit. Songs strain under the mass of noise splurging in the mix. Stickles can hardly be understood half the time, but it’s not like he was hitting any of his notes. It’s sloppy, first take, fuck it-punk that Stickles struggled to recapture on later albums. Here he asserts Titus Andronicus’ urgency.

“Fear and Loathing in Mahwah, NJ” crescendos into a Springsteenian opera and defeatist revolt. The self-titled “Titus Andronicus” is an eruption that employs one of music’s simplest tricks – turning the dial past ten. It rushes at a pace Stickles can barely match and peaks in less than two minutes then has enough gas to crest as if Sisyphus hurled his boulder off of the top of the cliff. “Arms Against Atrophy” melds jangle pop and early Replacements into a rollicking diary of Stickles’ adventures at summer camp.

Coursing through every track is a primal need to fight. It’s in Stickles’ voice, in the guitar solo on “Upon Viewing Brueghel’s Landscape With the Fall of Icarus,” in the pounding drums of “Titus Andronicus” like a defibrillator clocking in too quick of a tempo. And then the desperation turns to desolation. On “No Future” Titus Andronicus embrace shoegaze in a weary odyssey. Its follow-up “No Future Pt. 2” tries to carry a torch but its arms are too exhausted, so it rests on an Albert Camus quote and a driving drumline. It’s not until the closing track that Titus Andronicus unfurl their white flag. They admit, “they don’t give a fuck about nothing” as Stickles raves like there was no guarantee they’d ever record again.

Given Stickles’ eagerness to flaunt his existentialism it’s unsurprising how overtly the younger, less filtered front man philosophizes here. He confronts God, Sisyphus and Christianity, and how it can all exist in a world gurgling with malice. This inquisitiveness begets spry lapses into emo imagery. Stickles’ one-liners range from the clever “So when you lay me inside of a coffin/ Bury me on the side of the hill/ That’s a good place to get some thinking done” to the juvenile “There is not a doctor that can diagnose me/ I am dying slowly from Patrick Stickles Disease.” Later releases would eschew these cute tricks in favor of frankness, but the adolescent charm lies in Stickles’ attempts to crochet his lyrical idols and bunny-eared textbooks together.

Stickles wallows in his own melodrama with the only reprieve being the dusty production, forcing him to shout until he’s only decipherable through emotional transference. Beyond his pettiness Stickles articulates absurdism. He recounts the years he’s lived, the arms he’s broken at camp, his fears of entering the adult world and his birthday, and why? Too embellish his fear that it’s all for naught. If his suffering truly meant nothing, then why did he still suffer? The album concludes with Stickles reveling in the vapidity; “Lamb of God/ We think nothing of ourselves at all/ So death, be not proud/ Because we don’t give a fuck about nothing/ And we only want what we are not allowed.”

In 2010 The Monitor revamped the debut into a masterwork where Stickles couldn’t help but give a shit, and for the rest of their discography he’s reckoned with that decision. He’s been fighting to make his purpose Titus Andronicus, not just “the band that made The Monitor.” So The Airing of Grievances grapples with existence as a whole, rather than a disillusionment with a universe that ignores the existence of Titus Andronicus past 2010. Titus Andronicus still have their diehard fans, but the critics who boosted their profile a decade ago were quick to ditch them once they pivoted away from Pulp and Neutral Milk Hotel and towards more lowbrow influences like Bob Seger and Thin Lizzy. And who gives a fuck about rock in the ‘10s anyways? Who gives a fuck about anything? Why should we? That’s what Stickles catechizes through a muffled microphone in an adolescent essay he’ll never be able to recreate. He’s now too jaded to return to youthful absurdity. His debut is a relic of its time and the sketch of an artist desperate to find a purpose beyond suffering.