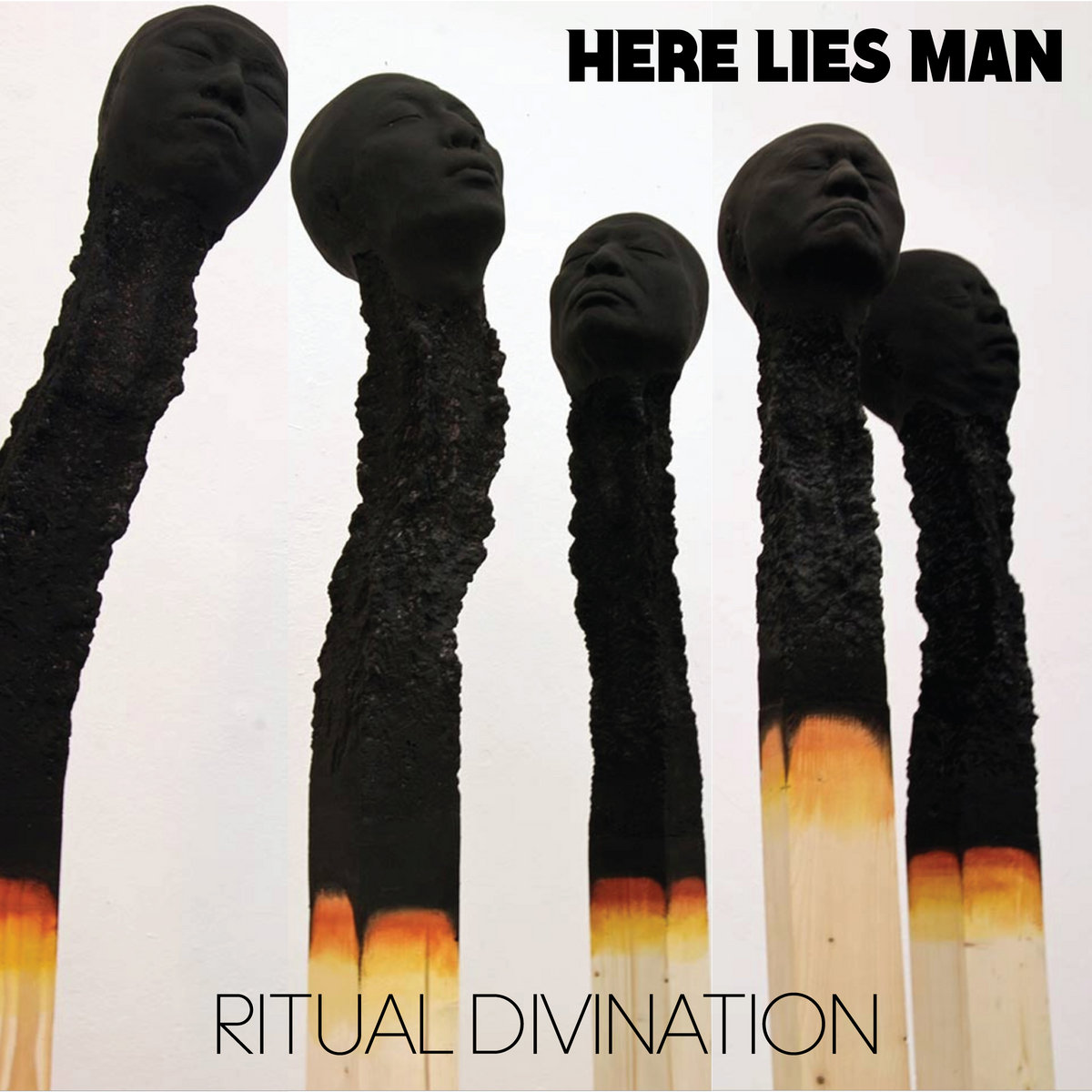 On paper, the West African rhythms of Antibalas would seem somewhat at odds with the more riff-heavy metal sound of Black Sabbath. But, as they’ve proven over the course of three albums, Here Lies Man manages to seamlessly meld the two with aplomb. Fronted by guitarist Chico Mann (aka Marcos Garcia) of Antibalas and the Daktaris and featuring Geoff Mann (son of jazz flautist Herbie Mann) on drums, Will Rast on keyboards and synthesizers and J.P. Maramba on bass, Here Lies Man have effortlessly illustrated just how similar metal and the more rhythmically-driven West African sounds can be. Each relies heavily on a solid foundation that, if tweaked only slightly, can go from straight-ahead four-on-the-floor rock to funky, rhythmically-nuanced grooves.

For their third outing, Ritual Divination, Mann and company continue to move just that much more away from the Afrobeat influence into far more riff-centric territory. Given their spot within the Sabbath-worshipping Riding Easy stable, it should come as no surprise that Here Lies Man have sought to make the riff kind on their latest. And while Ritual Divination is certainly a guitar-based record, drummer Mann is really the star of the show, his intricate playing pushed to the front of the mix throughout the album, allowing his impressive performance to be rightly recognized as the album’s main focal point.

So far in front are the drums that much of the remainder of the record feels related to the role of supporting player. Indeed, throughout Ritual Divination, the vocals sit so far down in the mix as to become just another tonality within the context of the song rather than the primary or driving focus. And while metal has a long history of intentionally obscured vocals, they virtually unintelligible and indecipherable with the exception of a few choice words and phrases throughout (generally via the employment of a given song’s title phrase). But this is by no means a knock against the record. In fact, it’s Mann’s frenetic drumming that helps push past what, in lesser hands, could become outright formulaic riff-based hard rock.

Without the aid of his driving drumming, Ritual Divination would come off as an almost assembly line series of exercises in which songs utilize a similar formula consisting of the initial statement of the riff, followed by sustained chording atop blistering drums, concluding with a restatement of the initial riff. Yet there remain enough instrumental intricacies and moments of genuine surprise throughout to maintain a level of interest and listener engagement not often found in this particular brand of hard rock. “I Told You (You Shall Die)” flirts with the Afro-beat rhythms of their previous outings. But it’s the stately brass fanfare that closes the track that offers a surprising, prog-indebted flourish.

Meanwhile, opening track “In These Dreams” sounds like Black Sabbath covering Pink Floyd circa Meddle (specifically “One of These Days”). Much of this is due to Rast’s synth textures, many of which seem to owe a great deal to Richard Wright’s playing. More specifically, the synths are just enough intentionally out of tune throughout the whole of the album to create a hallucinatory effect that is the most immediate psychedelic touchstone on an otherwise metal and groove-centric affair. “What You See” is again a riff-heavy Sabbath homage that relies on the woozy synth textures to lend an added air of doom and psych, with just a hint of prog proficiency for good measure.

“Run Away Children” is a mixed meter showcase from Mann‘s powerhouse drumming and rhythmic nuance, while “Can’t Kill It” is their most melodically Afro-beat offering, a perfect amalgamation of heavy and groove-oriented. Similarly, “I Wander” relies on a sinewy, serpentine riff set atop a wickedly funky drum groove. In these three, they manage a near-perfect mix of Antibalas’ West African grooves and their Riding Easy label mates’ Sabbath worship. If there’s one knock against the album, it is the slightly formulaic approach they take towards songwriting. Yet given the overall level of uniform quality riffage on display, it’s hard to fault a formula that is clearly working in their favor. Ritual Divination is a masterclass in mixing heavy with more rhythmically complex music and should help elevate Here Lies Man’s status just that much more.