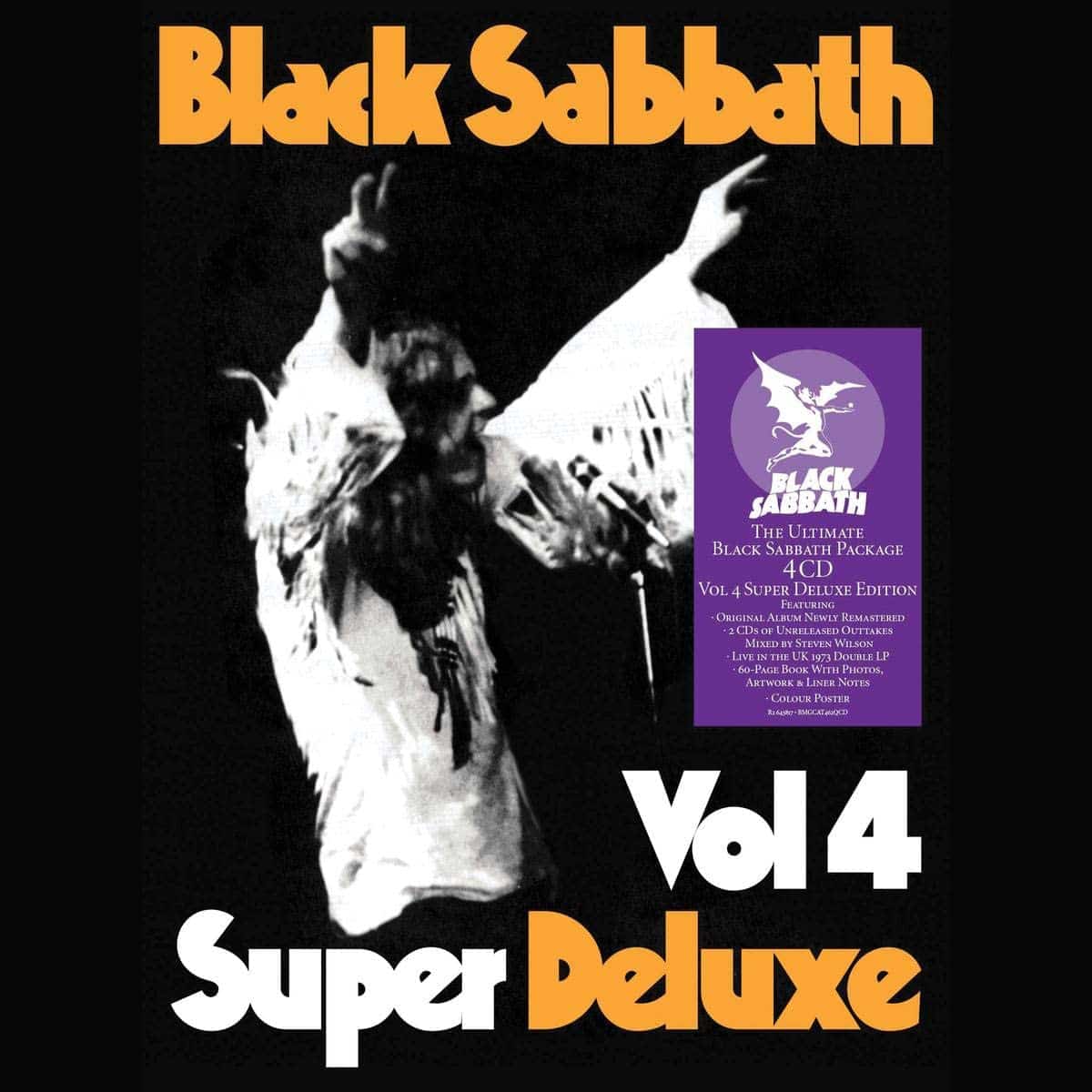 In 1972, Black Sabbath were neither the biggest band in the world (Led Zeppelin) nor the best (the motley crew that helped Miles Davis make On the Corner that year). But there was little doubt that they were the heaviest. The Birmingham quartet’s first three albums—recorded and released in a span of 21 months—didn’t just lay the foundation for heavy metal but perfected the genre before anyone else had the chance to catch up. Even the band’s critics: It wasn’t until the day before Paranoid hit shelves in the UK that Lester Bangs’ infamously damning review of Black Sabbath’s eponymous debut (“Just like Cream! But worse.”) was published in Rolling Stone. He was slightly less hostile one year later in his assessment of Master of Reality, but expressed doubt about the band’s ability to “grow and evolve […] so that there is a bit more variation in their sound from album to album.” Bangs’ criticism might have been wrong, but it did light upon an important point: Each Black Sabbath record up until that point was heavier than the one that preceded it, and it was getting harder to imagine how the band could keep going further into the void.

On their fourth album in as many years, Black Sabbath sought to add breadth, more than depth, to their sound. With seemingly no time or financial constraints in place, the group departed London for Los Angeles and allowed themselves to venture outside their musical comfort zones. Let’s be clear, though: This was nowhere near the kind of radical reinvention that the Beatles, David Bowie or even Queen underwent every other album at the heights of their powers. It is, however, safe to assume that very few listeners in 1972—fans and critics alike—expected to hear strings and Mellotron on a Black Sabbath record, and fewer still would have expected to hear a piano ballad. Vol. 4 marked the moment that Black Sabbath started to search for something beyond the darkness of their first three albums; it also portended their descent into a different kind of darkness—one that the band would only barely come back from, and not in one piece.

“You’re having a good time, baby, but that won’t last/ Your mind’s all full of things, you’re living too fast,” Ozzy Osbourne warned on Paranoid’s “Hand of Doom,” a ruinous depiction of heroin addiction among Vietnam War veterans. A little over a year later, however, Osbourne and his bandmates had acquired a voracious appetite for cocaine. It’s one thing to know that Black Sabbath wanted to title Vol. 4 “Snowblind” after its delirious centerpiece, which is to cocaine what Master of Reality’s “Sweet Leaf” was to marijuana. (The label flatly refused the idea, which makes the band’s shout-out to “the great COKE-Cola Company of Los Angeles” in the liner notes all the more baffling.) It’s something else entirely to know that they spent more money on cocaine during this period than they did on the album itself, buying so much of the drug that it was delivered to the studio in boxes. Guitarist Tony Iommi’s anecdote about covering an unconscious Bill Ward in spray paint underscores two of the three most remarkable things about Vol. 4—that anyone involved in the making of the album remembers anything about it, and that no one died in the process.

The third thing, of course, is that it’s as coherent and satisfying as it is. Though the negative effects of doing molehills of blow would soon make themselves apparent, Black Sabbath was firing on all cylinders on Vol. 4, packing the album with guitar riffs that sound like thunderclouds, a rhythm section that hits with almost physical force, and dynamic shifts that take the songs into thrilling and unexpected directions. (There’s only one real dud, and that’s “FX,” a short instrumental that came about when the band realized that guitars make weird noises when you hit the strings by accident.) The sludgy riffs on the opening and concluding tracks, “Wheels of Confusion” and “Under the Sun,” soon give way to galloping breakdowns and fleet guitar solos. But Vol. 4 is the odd record that peaks in its middle—preceding “Snowblind” in the track listing is “Supernaut,” not just the album’s best song but possibly the peak of drummer Bill Ward’s career; his opening fill bears an unmistakable similarity to Isaac Hayes’ “Theme from Shaft,” and his climactic drum solo is astonishing in its precision and intensity. (The fact that John Bonham cited it as one of his favorite songs secures its place in Black Sabbath’s pantheon.) On the other side of “Snowblind” is “Cornucopia,” a deceptively upbeat song about the depravity that comes with prosperity: “You’re gonna go insane!” Osbourne howls on the chorus. “I’m trying to save your brain!”

While lyricist and bassist Geezer Butler was no Bob Dylan, he at least made an effort to write about real-world concerns, most notably addressing working-class struggles and the Vietnam War on Paranoid. (Bangs, writing positively of Vol. 4, really did compare its lyrics to Dylan, which is even more ridiculous than his “Just like Cream!” dismissal.) His lyrics on Vol. 4 are more personal, revolving primarily around loss—of innocence (“Lost in happiness I knew no fears/ Innocence and love was all I knew/ It was an illusion!” on “Wheels of Confusion”), of control (“Snowblind”), of faith (“Under the Sun”), and on the aforementioned piano ballad, “Changes,” loss of love. On paper, “Changes” sounds like a lark: Black Sabbath dropping the sonic heaviness they were known for and going all-in on sonic heaviness. But that’s exactly why the song works. Osbourne’s vocal performance feels tender and vulnerable, while Iommi’s minimal piano riff and frigid Mellotron don’t tip the heartbreak over into mawkishness. Even if Charles Bradley’s soulful cover blows it out of the water, Black Sabbath’s original recording is a triumph, and one of the most unique songs in their oeuvre.

There would be more changes for them to go through in the years to come. In between tour dates, Black Sabbath returned to L.A. in the summer of 1973 to work on Vol. 4’s follow-up, only for an exhausted and cocaine-addled Iommi to collapse during a show at the Hollywood Bowl. The band took a few months off afterward, but by the time they reconvened back in London, the cracks in the foundation were showing, and growing: escalating substance abuse fueled resentment between band members, and dissatisfaction with their management would lead to prolonged litigation after the completion of their fifth album, Sabbath Bloody Sabbath. On the live disc that accompanies this Super Deluxe Edition of Vol. 4, however, Black Sabbath sound monolithic. (The reissue also comes with two discs of alternate takes and new mixes.) They tear through classics like “War Pigs” and newer favorites like “Supernaut” with an almost feral intensity, and stretch “Wicked World” into a 20-minute onslaught of sonic destruction, complete with bass solos and folksy breakdowns. If you close your eyes as you listen to it, you can almost smell the sweet leaves burning from the audience, almost see Osbourne holding both hands aloft. They sound so heavy they just might break the earth open.