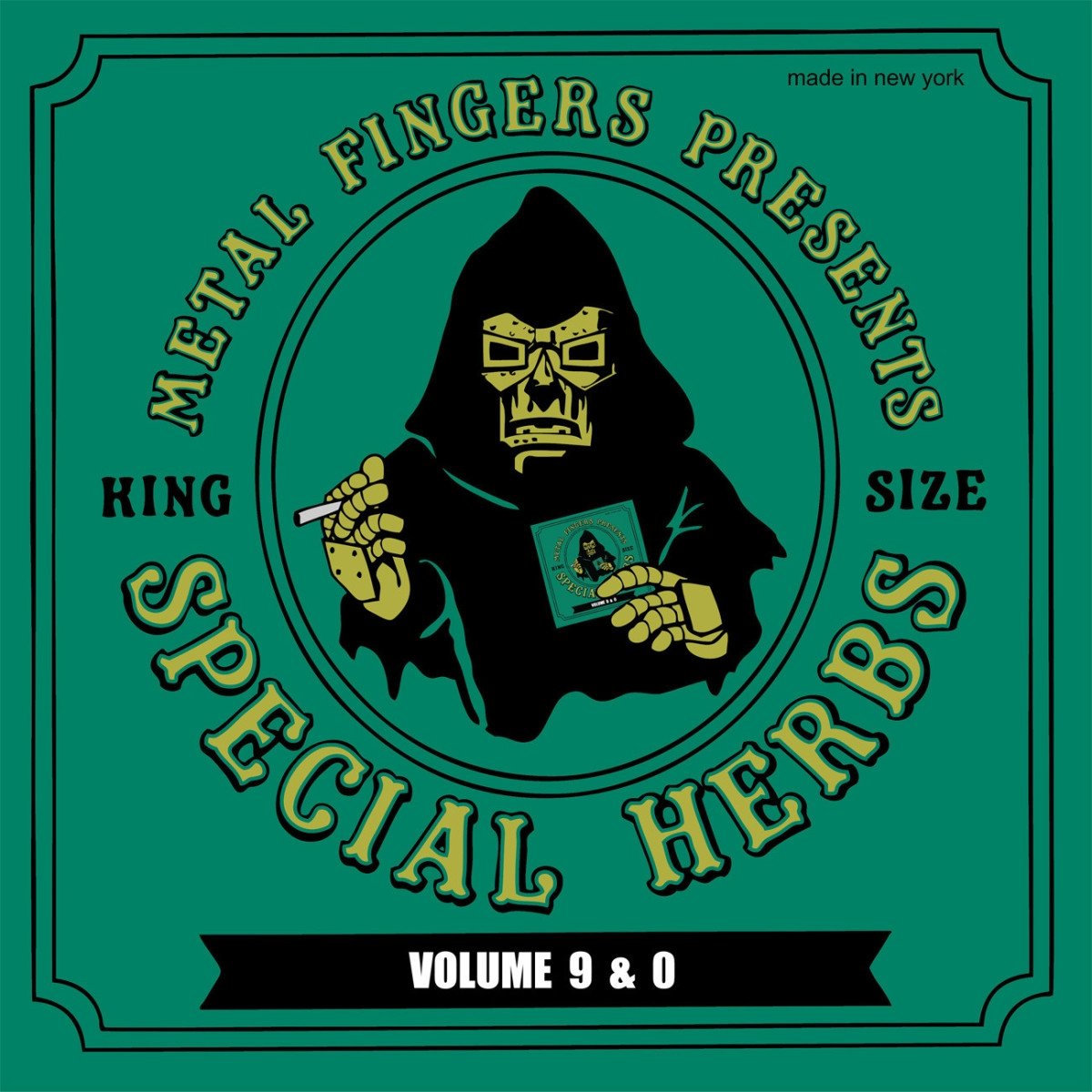 You wonder what MF DOOM did with his time. The masked man spent his last decade of his life sans solo album, many of his later verses were phoned in and then there’s the whole thing with the impostors. My guess is that he spent a lot of that time consuming artworks: records, movies, cartoons. If that’s true, his 2001-2005 Special Herbs series of beat comps is one of his most personal offerings. One of the great things about sampling is that it gives physical form to the truth that an artist’s output is the sum of all the art they’ve absorbed and all that they’ve experienced in their lives. And while DOOM’s co-conspirator Madlib might manifest this fact more gracefully and exhaustively, weaving his ungodly music geekdom and intelligent shopping into rich, shroomed-out tapestries, it’s just as true of the hours of beats compiled on Special Herbs.

This Github guide is useful in making sense of Special Herbs, in part because it lets you track DOOM’s obsessions. Two Blackbyrds-derived beats are spaced next to each other at the beginning of Vol. 5, presumably because the villain was going through a Blackbyrds phase at the time. “Arabic Gum” is sampled from the pilot episode of the anime “Star Blazers,” probably because he never got past the pilot, but he got at least three seasons into the 1967 “Spider-Man” show. It takes a lot of listening to make music like this, especially in such a quantity and in such a short period of time. DOOM has always embraced his love of cartoons and monster movies and horror and other cultural detritus, but while he’s usually inviting us to see him as a (usually villainous) character in these properties, here we can hear the fan behind the fantasy.

Like much copyright-flouting hip-hop in those days, Special Herbs came out on a series of small labels. Female Fun, High Times, Nature Sounds, and Shaman Works have all put out Special Herbs albums, some of which overlap so significantly and are so confusingly titled that you might spend as much time figuring out which Special Herbs to listen to as it takes to listen to one of the actual albums. (That DOOM put out an album with MF Grimm called Special Herbs & Spices, Vol. 1 doesn’t help.) My advice is to start with the Special Herbs, The Box Set Vol. 0-9 comp on Nature Sounds. It has most of the best stuff, a compilation of KMD instrumentals, and some more unreleased work from the vaults. From there, you can go back through the archives and find fresh new beats. Even casual heads will recognize at least some of these productions, either from DOOM’s own albums or from his productions for artists like Ghostface, whose Fishscale has metal fingerprints all over it.

Taxonomically, these beats are closer to the boom-bap style of beatmaking on which DOOM cut his teeth than the staggered, filtered style that defines instrumental hip-hop today. The metal man likes big, blocky sounds: organs, electric pianos, drums that crunch, basslines that skid like spiders. The vocal samples don’t insinuate but pop out harshly, like when the first verse of Steely Dan’s “Black Cow” crudely barges into “Calamus.” Some beats clearly involved a dazzling amount of elbow grease, like the impossibly dense and opulent “Coca Leaf.” “Mandrake,” meanwhile, is just the beginning of “What a Fool Believes” by the Doobie Brothers looped, and if DOOM added anything you’d need a dog’s ear to hear it. The villain still finds ways to bend the brain, like the trippy drum delay on “Bergamont” (not to be confused with “Bergamot”) or the killer not-a-snare on “Red #40” (maybe inspired by Ghostface’s “Stroke of Death”). But this is not instrumental hip hop that makes a great show of standing on its own, even when it does. You can always rap on it.

If Special Herbs seems quaint in 2021, it’s not so much because of how the genre’s evolved so much as how it’s devolved. Around the time the last Metal Fingers volumes were trickling out, Adult Swim started pairing its interstitial “bumpers” to beats by J Dilla, Madlib, and the Japanese maestro Nujabes. The idea of instrumental hip-hop became more familiar to Middle America, and the genre is now a sad commodity, with playlists of anonymous chill beats by anonymous artists taking the place of musical engagement in earbuds around the world. Special herbs are now so legal and genetically modified they’re liable to melt the mind past any sort of intellectual involvement with music, and an instrumental hip-hop album that reflects its creator’s idiosyncrasies and demands to be engaged with is a rare thing in this DOOM-free universe.