April 11, 2021
Home Music Portrayal of Guilt: We Are Always Alone 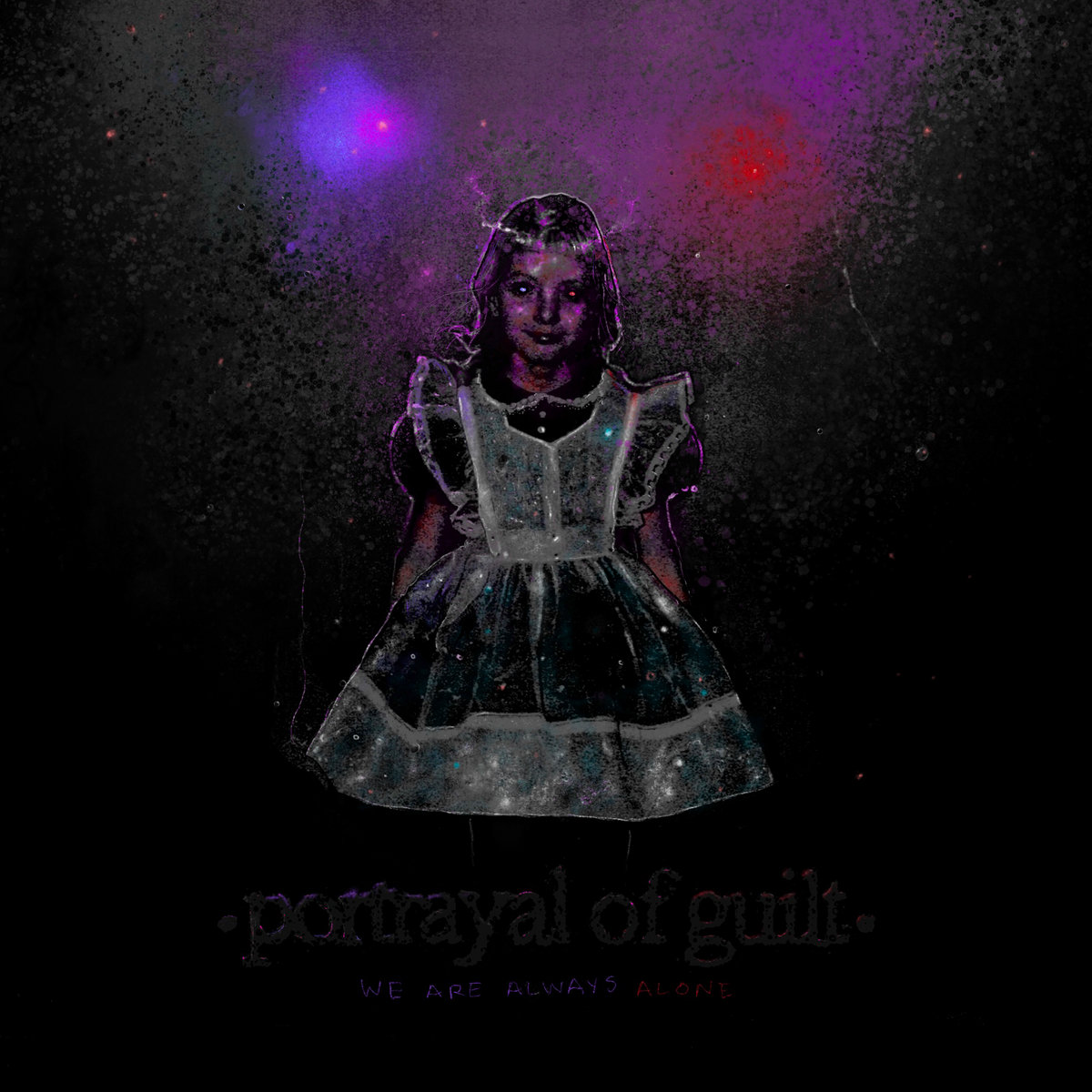 Here’s something the hardcore kids will always have up on indie bands: album length. While Sufjan and The Avalanches are routinely pushing their albums out to a length that could compete with a minor Disney flick, the doom-dwellers are able to capture feelings just as complicated as anything Matt Berninger could capture, but in half the time. Perhaps it’s because hardcore bands just burn themselves out quicker – it would also explain why these bands never seem to last more than a few years, amassing discographies that future labels would be capable of stuffing entirely into the length of a single CD/2LP package. Perhaps, though, it’s just that one can only sit with the darkness for so long before you have to crawl out of it.

This seems to be the case with the unflinching onslaught in the form of a band called Portrayal of Guilt. Their 2018 debut, the outstandingly-named Suffering is a Gift spends little time letting up and allowing the listener to stew on their songs, but the trade-off is that the record was exactly as long as an episode of The Simpsons. Now on their second LP, We Are Always Alone expands their reach to a comparatively super-sized 26 minutes, precious few moments of which allow you to try and regain composure – or even your footing. Even in the quieter moments – the chugging breakdown of “Garden of Despair” or the distant clean vocals midway through “My Immolation” comes to mind – the levels of dis-ease and discomfort sewn into the fabric make it difficult to let it all in. It’s no coincidence that the back-to-back “Garden of Despair” and “My Immolation” are the longest songs here, and the only two to punch past the four-minute mark. Here, they’re trading brevity for something a little better than simple brutality.

All of this is really to say: what makes Portrayal of Guilt so spectacular is that they’ve gotten excellent at trimming as much fat as possible off any song they write. These songs are very excellent slabs of fury even when taken individually, and it feels like every moment of invasion and repulsion serves a clear and present focus, even when it’s just to instill sickly dread, like the brooding intro of “Anesthetized.” Wanking around and playing twinkly, wandering guitars when you’re not screaming your head off is great if you’re Saetia or City of Caterpillar, but there’s no need for it here. The point isn’t to “hang out” within the walls of each song – the point is to pummel you. We Are Always Alone wears its intentions on its jacket – quite literally, with the title presenting us with everything we need to know about the scorched and furious world within.

Much of that fury exists within the album’s lyrics, and unless you have a trained ear for it, it’s always going to be at least a little bit impossible to really dig lyrics out of bands like Portrayal of Guilt without following along. Frontman and guitarist Matt King doesn’t exactly make it easy with his Sméagolesque delivery, only breaking from it to deliver clean vocals on precise occasions – it’s a staple of every shade of emo/metal/post-hardcore, but it doesn’t make it easier, especially when his howling is persistently aurally battered by their thrashing instrumental onslaught. But his words are, themselves, their own kind of brutality – they’re presented like blunt-force weapons used to fight back against “A life spent suffering,” as he sings on opener “The Second Coming.” They aren’t ever florid, their meaning direct as hell. Here’s a swatch: “Your faith can’t save you/ Your prayers, they mean nothing/ You’ll never know true sorrow/ What makes you so different?” Here’s another: “I search for heaven in the ceiling/ But all I’ve found is an endless sea of black/ I feel myself letting go/ I submit myself to what the world chose for me/ My eyes roll back/ The terror begins/ I follow the light/ There’s nothing at the end.” It’s not groundbreaking stuff, but that isn’t the point. The point is to give a voice to help convey the agony of existence, and to paint it as a gift would be a betrayal of self.

The biggest disappointment in We Are Always Alone is knowing that Portrayal of Guilt’s framework is radically restrictive, to the point where it makes growth and expansion difficult without changing the formula for what makes a Portrayal of Guilt album – and, thus, what fuels Portrayal of Guilt as a band. You can have as many doomladen guitar breakdowns or songs as punishing as “Masochistic Oath” as you’d like, but it’s just going to be more of the same, reborn every few years like an old wound cruelly ripped open. Maybe that’s why bands of the same ilk collapse after such short careers – you can only thrash around in a small for so long before you burn out completely.