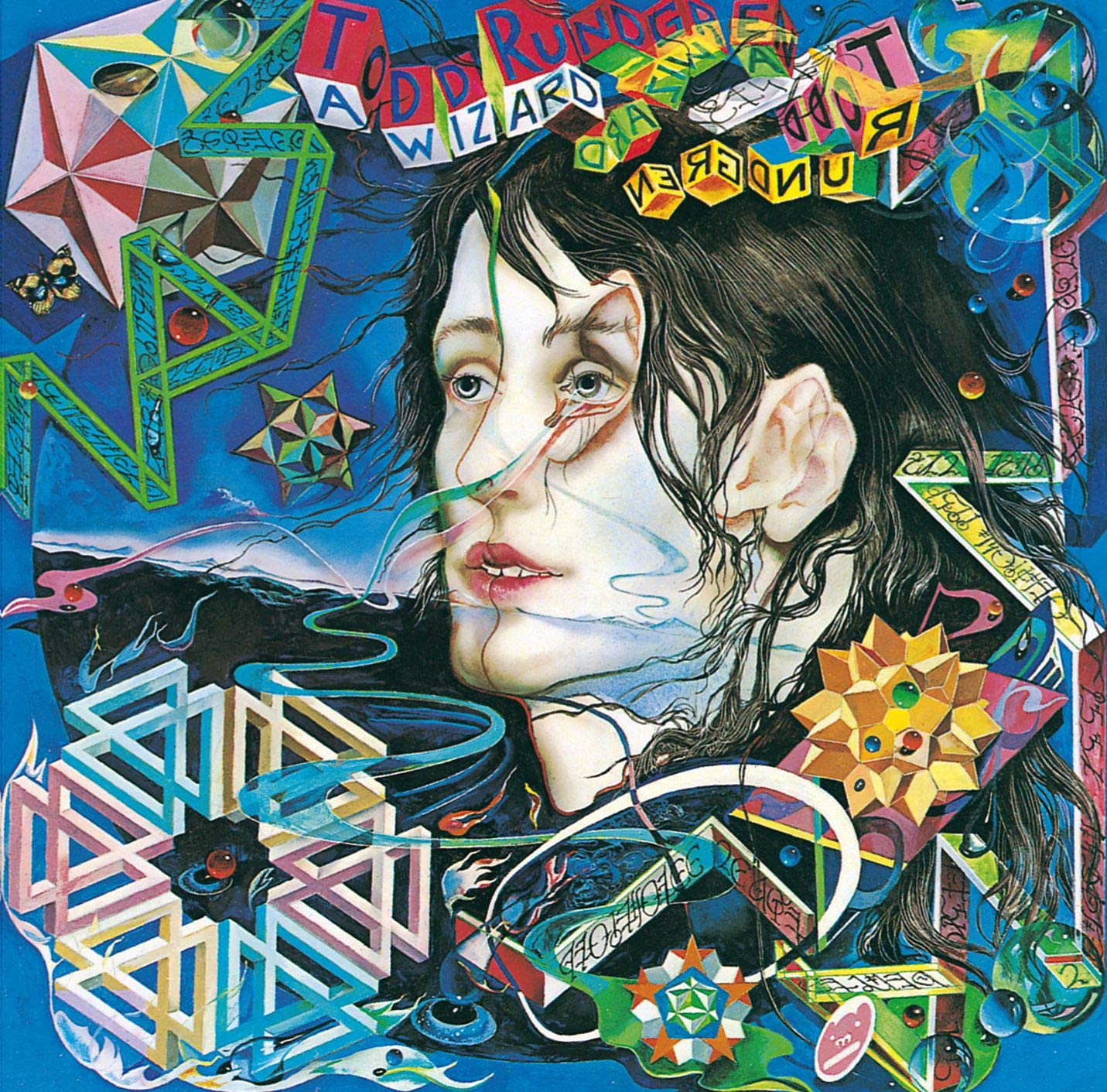 It takes a certain amount of gall to name your album A Wizard, A True Star, but Todd Rundgren has never been an artist without his fair share of chutzpah. Recorded in an era when vinyl records were the only medium, putting close to 30 minutes of music on one side of an LP was simply not done. Yet the A side runs a mind boggling 26:17 seconds and the B runs even longer 28:48. In order to fit that much music on a slab of vinyl meant you had to sacrifice volume, so you really need to turn this sucker up to hear it the way it should be heard. And he recorded the album when he was only 24!

This was Rundgren’s fourth solo album, after three Nazz albums recorded in his teens. Feeling that his previous album, the two-LP Something/Anything? was formulaic and lazy, Rundgren decided to do something more progressive in keeping with his taste for The Mahavishnu Orchestra, Yes and Zappa. At its heart, A Wizard, a True Star ends up sounding like no one other than Todd Rundgren, which is no bad thing. Most remarkable is the way it combines virtually every aspect of Rundgren’s character, sometimes all in one song. The opener “International Feel” and the side one closing “La Feel Internationale” are perfect examples of the way he would go overboard, layering track after track and vocal after vocal just for the sake of it. But that’s also why these songs resonate among fans: sometimes we need wretched excess, and that’s in abundance here.

The problem is that a lot of people had no idea what Rundgren was going on about. He threw in everything except the kitchen sink, starting with the roar of a synthesized jet struggling to achieve full throttle. But how do you keep the darn thing in the air? That’s where the crazed genius begins to juggle as many sounds and instruments as he can. His first words on International Feel suggest that he really has a less than firm feel of what is going on, “Here we are again, at the start of the end, but there’s more/ I only want to see if you’ll give up on me/ But there’s always more.” His only certainly is in the uncertainty of what comes next.

In Rundgren’s case, it’s “Never Never Land” from Peter Pan. The logic is inescapable, if you buy into it. At 24 he was the ultimate man-child. Of course, for many, this was the point where they may have been tempted to tune it all out and move to slap something else on the turntable. Rundgren is throwing everything against the wall to see what sticks before moving on to the next thing, often in just over a minute. The guitar solo of “You Need Your Head” moves at a breakneck pace. The entire side plays with each song segueing right into the next, so you never get a chance to breathe.

“Just Another Onionhead/Dada Dali,” combines Groucho Marx with a gorgeous chorus of “You want the obvious/ You’ll get the obvious,” while illustrating his ability to combine faux Gilbert and Sullivan with the Rundgren mystique. Between the sounds of dogfights, slide whistles and carnival organs you realize that there’s a certain sense of comfort in his sound collages. By the time the “Zen Archer” uses his arrows to split your skull as it crosses from one speaker to the next, it begins to dawn of you that this may just be a madcap masterpiece.

Opening side two, “Sometimes I Just Don’t Know What to Feel” reveals the existential drama that is Todd. How do you react to the myriad of things going on at one time, especially when you are dealing with a country reeling with the chaos of Nixon administration, yet tearing itself apart after a landslide victory because of the phone bugging in the offices the Democratic National Committee. In the current political landscape, it is hard to believe that a president could be brought down by the lies of Watergate while the great bronzer couldn’t be brought to justice for outright insurrection.

People often forget that at his heart Rundgren is just a guy from Philadelphia, and along with The Beatles and the Stones, the soul of Gamble & Huff, the Delfonics and the O’Jays run through his veins. The 10-minute “Medley” of “I’m So Proud/ Ooh Baby Baby/ La La Means I Love You/ Cool Jerk” reveals the essentially radio-friendly soul of a rocker. It illustrates Rundgren really is an everyman who understands one of the essential lessons of music is to go straight to the heart, although where “Cool Jerk” goes is anybody’s guess.

The wizard is also prone to being willfully unhinged, as he recounted during a commencement speech at the Berklee College of Music: “my act of tyranny after having achieved commercial success … I threw out all the rules of record making and decided I would try to imprint the chaos in my head onto a record without trying to clean it up for everyone else’s benefit. The result was a complete loss of about half of my audience at that point … This became the model for my life after that.”

The final moments of the album offer some of the best Rundgren ever put on disc. “I Don’t Want to Tie You Down” stands as an almost perfect love song. “Sometimes it’s hard to look up under/ The times we’re going through/ I scratch my head and stare and wonder/ How to face the day anew/ But it gives my life a bit more meaning/ To feel in love with you.” The honesty and purity of that emotion is so simple and direct. How can you not love someone who is able to say the things we feel? Maybe Todd Rundgren really is A Wizard, A True Star.

Even better, “Just One Victory” revels in the depths of despair while understanding that one single moment can change everything. “Somehow, someday/ We need just one victory and we’re on our way.” The victories have come, along with more than a few defeats, yet listening to this song continues to provide hope. Which really is what A Wizard, A True Star is all about. Hope. Todd Rundgren reminds us, and himself, that as long as we have hope we can make it through just about anything. Those are still words to live by 48-years down the pike.