Though no one truly bleeds in Town Bloody Hall, Chris Hegedus and D.A. Pennebaker’s 1979 documentary, there are some wicked barbs thrown about as its subjects go for the jugular. The chronicle of a raucous and rancorous evening featuring a true battle of the sexes, Town Bloody Hall still retains its ability to confound, confuse, inflame and entertain many decades later.

Billed as a discussion between author Norman Mailer and four feminist thinkers, the film shows us the events of Friday, April 30, 1971 when the five principles agreed to spar in front of an audience at Town Hall as part of New York’s Theatre for Ideas. Billed as the “Dialogue on Women’s Liberation,” the event brought out a veritable who’s who to witness the melee, from Betty Friedan to Susan Sontag to Gregory Corso. High-minded, high-falutin’ and sometimes incoherent, the film is 85 minutes (cut down from the event’s full three-and-a-half-hour duration) of philosophical waxing, ad hominem attacks, gonzo monologues and lowbrow potshots at Mailer’s genitalia.

The idea for the event came about after Mailer published the essay, “The Prisoner of Sex” in Harper’s, a critique of feminism. In the article, he went after feminist writer Kate Millett, who attacked Mailer’s chauvinism and patriarchal role in her 1970 book, Sexual Politics. Shirley Boughton, the founder of the Theatre for Ideas, conceived the evening as a literary boxing match between Mailer and Millett. But after Millett, and numerous other feminist writers, declined the invitation, Boughton found four women who ran the gamut of opinion on feminism to debate Mailer.

The rules of the event were simple: each woman would have 10 minutes to speak, followed by a question from moderator Mailer. Once that portion of the evening ended, then the audience would have a chance to pose questions to the panelists. Joining Mailer on the stage were Jacqueline Ceballos- president of the New York Chapter of the National Organization for Women (NOW), Australian writer Germaine Greer who had recently published the bestselling book, The Female Eunuch, Village Voice critic Jill Johnston and the much-respected literary critic Diana Trilling.

An electricity crackles through the audience and it isn’t long before members start hurling insults at Mailer and the women on stage. Corso walked out of the event early, shouting at Ceballos as she explained NOW’s position on compensation for women who work at home instead of seeking jobs. Ceballos, who is clearly out of her depth as a last-minute invitee, presented a solid opening argument but then wisely cedes the floor to her other more loquacious and intellectual counterparts. 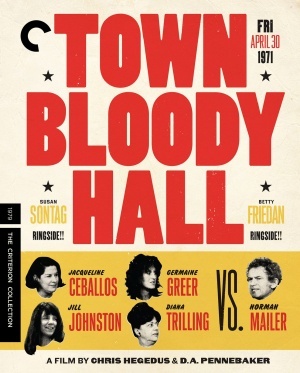 Up second is Greer, every much the star as the attention-hogging Mailer. Dressed in a fur stole with rock star hair and a sleeveless dress, Greer begins her speech explaining the terror that comes with decrying Mailer, part of the “most privileged in male elitist society – namely, the masculine artist, the pinnacle of the masculine elite.” With a hot new book out, Greer is clearly the star of the bunch, something Trilling is unwilling to accept. When the critic delves into her confounding speech, which vacillates from point to point, she also attacks Greer for not understanding Sigmund Freud. Trilling, the most traditional of the four women, may not even believe in feminism but that doesn’t stop her for deriding critics of the female orgasm.

The most out-there speech goes to Johnston, who blows by her allotted 10 minutes by reading a statement that begins with “all women are lesbians except those who don’t know it naturally. They are but don’t know it yet. I am a woman and therefore a lesbian. I am a woman who is a lesbian because I am a woman.” Johnston, who presses on despite Mailer’s wild protestations, gives a speech littered with jokes and non-sequiturs, including a dig at women who “want to have their cock and eat it too.” In an ultimate fuck-you to Mailer, two audience members take to the stage and begin a make-out session with Johnston to which the moderator quips, “Hey, you know, it’s great you paid twenty-five bucks to see three dirty overalls on the floor when you could see lots of cock and cunt for four dollars just down the street.” Johnston and her friends exit the stage and are never seen again.

While it’s clear that none of the women like Mailer, their ideas on feminism range so broadly that they find themselves often at odds. At one point, Greer moans that the oppressed are all alike because they end up fighting among themselves. Mailer appears to be having a blast as the women tear into him, he tears into the women and the audience tears into them all. He definitely enjoys the attention, frequently interrupting and saying all kinds of nonsense about the size of his Jewish cock to calling an agitator in the audience “cunty.”

Even as the feminist movement has evolved and changed over the past few decades, Town Bloody Hall is a fascinating document of a time and place where such ideas could be debated in front of an audience in a wild and free-wheeling way, in a forum where everyone’s outlandish ideas could be heard, no matter how incendiary. Greer, then on the cutting edge for feminist politics, is now a pariah for her transphobic ideas. In the early ’70s, Johnston’s open displays of lesbian affection were taboo-busting. Today they seem tame. Does anyone question the existence of the vaginal orgasm? And Mailer, a man who once referred to his own penis as “the retaliator” would be long-canceled. Town Bloody Hall shows New York City literati at their decadent worst, fangs bared and out for blood. Those were the days.