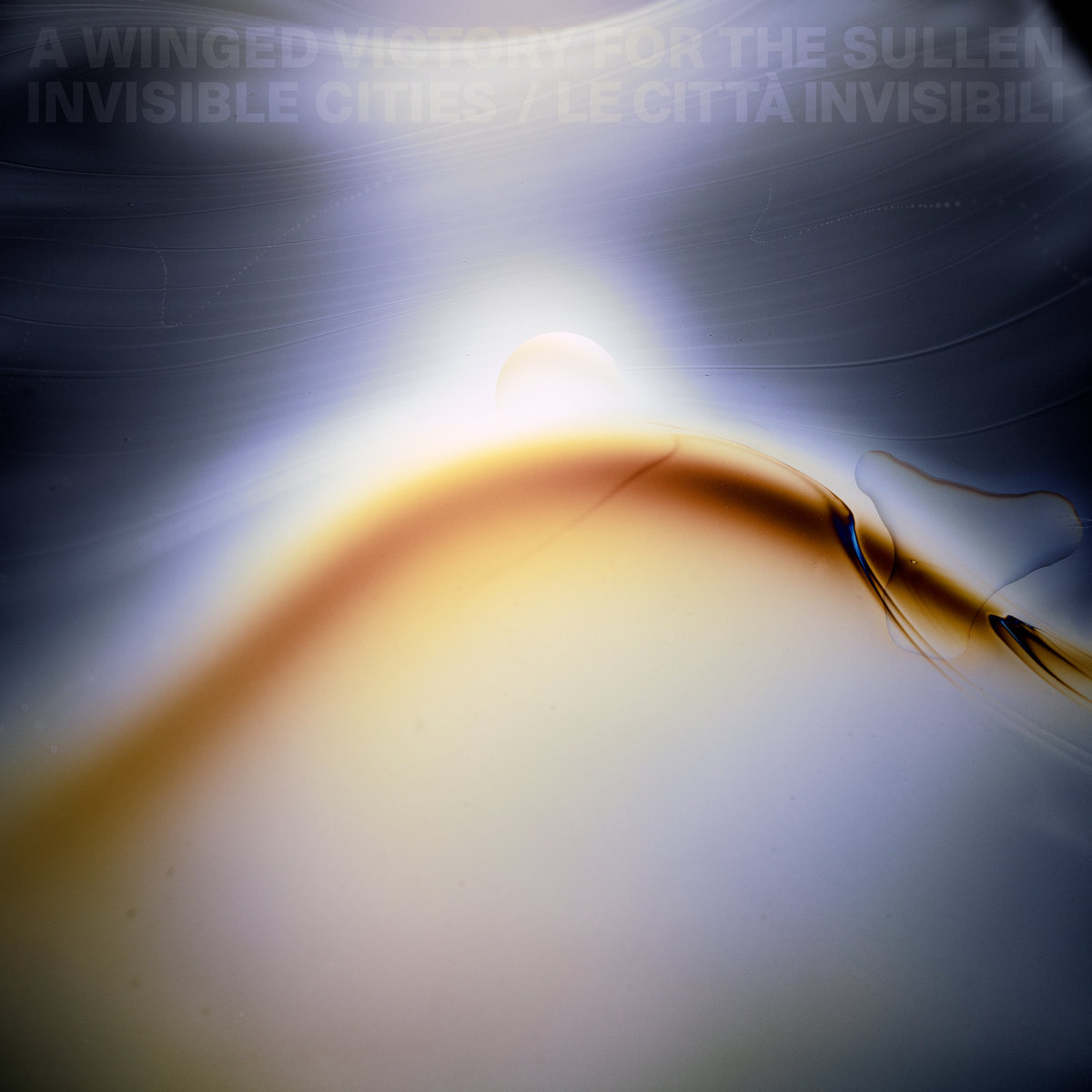 One of the most miraculous things about the work of A Winged Victory for the Sullen – and this extends backwards to member Adam Wiltzie’s other band, beloved ambient drone act Stars of the Lid – is that they are able to mine creative depths within glacial landscapes and articulate silences more deftly than almost anyone this side of Brian Eno. If you don’t possess the overwhelming desire to truly dissect their works, it could be easy to mistake one beautiful, quiet, sometimes orchestral song from The Undivided Five for another on Atomos. Each song, and each album, functions like an aural float tank, gently cradling you and for a period while treating you to a wide array of soft, wondrous emotions. With The Undivided Five, songs began to possess a touch more personality – the choppy synth staccato of “Atomos IV” and subtly pixelated synths of “Rhythm of a Dividing Pair,” for instance, stick out like sore thumbs. Even still, the playfully named “Our Lord Debussy,” with its almost-too-subtle upwards trajectory, would slot nicely next to the “We Played Some Open Chords.”

In comes Invisible Cities. Yet another chance for Wiltzie and pianist Dustin O’Halloran to show their mettle as composers, joining Atomos and Iris in the stack of works made to accompany other works (to say nothing of Wiltzie and O’Halloran’s work on countless soundtracks separately). Invisible Cities was designed to accompany the dance theater interpretation of Italian postmodernist Italo Calvino’s Marco Polo/Kublai Khan fanfiction of the same name. Don’t worry: you don’t need to have read the book to follow along with the music. You don’t even need to be the kind of intellectual whose fancy is tickled by the idea of listening to the score of a dance interpretation of Italian literature. For the first time in A Winged Victory’s career, they’re made something that isn’t just dreamy – it’s engaging, front to back.

Opener “So That the City Can Begin to Exist” gives us business as usual. Another quiet, almost resigned trek behind the eyelids, essentially paint-by-number neoclassical drowsiness – but, again, the Cadillac, the Dom Perignon, the Rolex of neoclassical drowsiness. Ignore that, though; that shit is going to make a comeback, but you shouldn’t focus on that. Something changes, just one song later. “The Celestial City” begins much like “So That the City” did, but it’s a fake-out: soon, a gentle pulse rises up from the earth – an honest-to-god beat. Lethargic sirens that sound like a distorted squeal of guitar floods your ears, too. It doesn’t get that much farther than this, but time here moves impossibly slowly – any variation feels like we’ve hit warp speed. It doesn’t stop there – the chilling “Thirteenth Century Travelogue” could masquerade as the work of the other soundtrack-loving duo, Trent Reznor and Atticus Ross, with an oscillating synth beat that floats in, just out of focus, like a moth just outside the sphere of light around an open flame before making way for a brief, machine-like throb. “Thirteenth Century Travelogue” isn’t an especially unique or groundbreaking song, but without extending back to the more primitive “noisiness” (for lack of a better word – none of these bands are ever really “noisy”) of Stars of the Lid up until The Ballasted Orchestra, it’s hard to find anything that feels quite like it. And wait ‘til you hear “There Is One of Which You Never Speak” – just so you know, your speakers aren’t shorting out, it’s supposed to sound that way.

What’s even better is the moments where it feels like they’re just returning to the same well of laudanum as usual, they include confounding touches that seem designed to ask you to not fret over that fact. The ghosts of distortion and noise peek through the windows of the subtle “The Divided City,” never enough that you’d think hard about their presence, but just noticeable enough that, once again, things just feel different. One song later, “Only Strings and Their Support Remain” is a thickly-layered cauldron of piano, synth and violins, its heartbeat the closest they’ve ever come to making something you might want to bob your head to. Atomos was designed to accompany dance as well, but the bulk of it lacked moments where you could fully imagine dance occurring. Here, though, their compositions feel fully adapted to accompany movement, and along with it, they’ve cracked the code for making their individual songs not just memorable, but craveable.

And that, truly, is the most impressive thing about Invisible Cities. Many of us will never get the chance to really find out how well Wiltzie and O’Halloran did in making music to work in lockstep with dancers and choreography. This was the problem with Atomos, as well, another dance soundtrack that laid groundwork for where they’d land seven years later, when given the opportunity to do another one. Like all the best scores, this one exists as an excellent work worth absorbing even outside of any visual context. It’s more than that, though – it’s a breath of fresh air that does more to gently and tastefully expand A Winged Victory for the Sullen’s range to sound closer to that of a “real band” than any of their work before, while never really betraying the band’s Debussy-worshipping core.