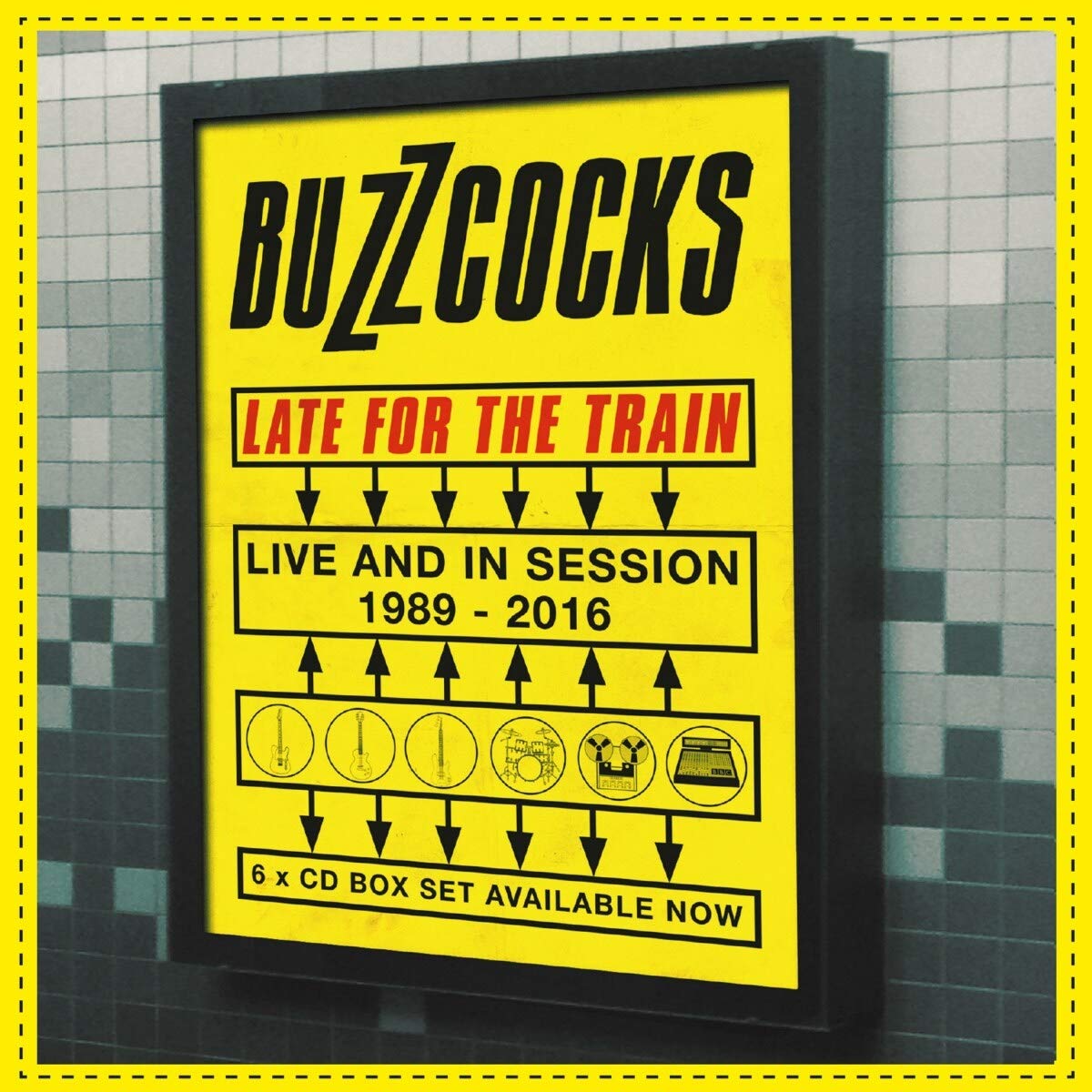 For many casual fans, Buzzcocks remain frozen in 1979. Their compilation Singles Going Steady stands as an essential piece of punk and the band’s own finest release. The group was still in fine form on that year’s A Different Kind of Tension, but it would be the final studio album of their original run. Punk itself started to change with the onset of the 1980s, and Buzzcocks looked like a representative act of a finished era. Fortunately, they weren’t, reuniting over a decade later for a second productive run. The group sounds almost as if they haven’t aged, keeping the energy as high as ever even as they fit into a new period of music. Late for the Train – Live & in Session 1989-2016 honors this second, but not secondary, stretch of music with six discs of mostly concert material that show not only why the band was so good to start with, but how they’ve maintained their enthusiasm with something more than just a cash-in reunion.

The first two discs capture the band reforming in 1989 and then again on their Trade Test Transmissions Tour from 1993. Each show (one per disc) is listed as an “official bootleg,” and comes with the raw but good enough sound you’d expect. Over these two sets, we see the band make a transition. At the Birmingham show in 1989, they reunited to be what they always were. With plenty of hits (the regulars show up repeatedly across the discs) in the setlist, Buzzcocks revisit the late ’70s for a fun romp that should satisfy. A few years later they have a string of new songs and an adaptation to the alt-rock of the era. They remain clearly identifiable – that joyful pop-punk sound never disappears – but they’re also noticeably unfrozen.

By discs three and four, the group settles into its mid-90s sound. They’ve been back together for a while now and the shows are comfortable mixes of the songs we’ll always hear (as if you could really tire of “What Do I Get?”) and deeper cuts. The 1996 comes from a tour with the Sex Pistols, and it’s easy to catch the energy even if the lineup more than hints at the nostalgia driving the tour (Buzzcocks at least released All Set that year).

The star show of the set (whether or not it’s the best) comes on disc five, with the London show from 2006, already available as the 30 release (also just put out on vinyl as 30 Live in London). Celebrating 30 years together, the band sounds great. Buzzcocks play charged, but tight performances here, apparently enjoying the show as much as the fans. The show suffers some, though, from its steady sense of tempo and lack of dynamics. It’s quintessentially Buzzcockian from start to finish, a sure blast of pleasure, but the band feels a little one-dimensional here. That’s a risk for this sort of band across a six-disc set, but the mix of tours and (mostly) setlists keeps that feeling from arising too often.

The final disc puts the band in a useful setting for this box by gathering their BBC sessions (mostly in the studio but also including a few festival tracks). Buzzcocks sound properly ragged but enthusiastic, and hearing some of the new songs early in their life cycle makes for a particular treat. The set comes to a close in 2016, just two years before Pete Shelley would pass away. Even after six CDs, it’s still easy to wish there was a little more coming.