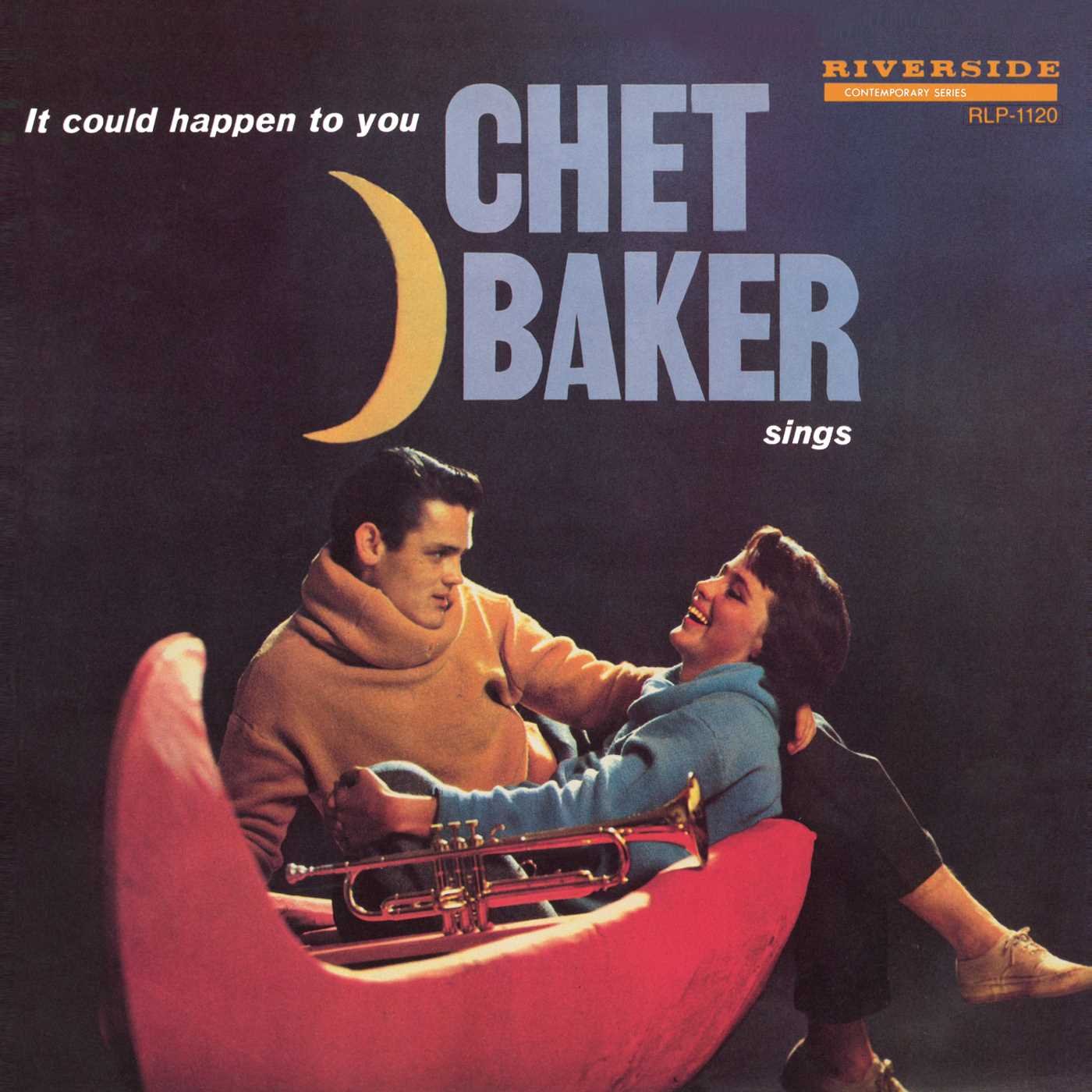 By the time Chet Baker signed to the Riverside label in 1958, the 29-year-old trumpeter/singer was one of the brightest stars in the jazz firmament, having played on a mind-boggling number of records as both sideman and leader since his debut with Gerry Mulligan in 1952, as well as taking his own band around the world and even appearing in a Hollywood movie. In short, he was famous in a way that transcended jazz and occasionally earned the derision of some of his peers – most notably his hero Miles Davis, who accepted the younger player’s talent but also noted his marketable whiteness and his willingness to take his music into more commercial directions, just when jazz was caught in a pincer movement between the popularity of singers like Frank Sinatra on the one hand and the emergence of rock ‘n’ roll on the other.

Baker’s tenure with Riverside began both brilliantly and slightly frustratingly in October 1958 with (Chet Baker Sings) It Could Happen to You, which reinforces to some extent the modern idea of Baker as Vanilla Ice to Miles’ Public Enemy. The album features possibly Baker’s best group up to that point; pianist Kenny Drew (from a jazz point of view the star of the show) and the driving, flexible rhythm section of George Morrow (bass) and Philly Joe Jones (drums) — but there’s relatively little trumpet. The album starts as it means to go on with a sprightly, swinging “Do It the Hard Way,” establishing what will become the main features of the album: the crisp, nimble piano; the springy rhythm; Baker’s light, appealing vocals. It would be wrong to denigrate Baker’s voice — he has a youthful and informal quality that makes him far more listenable than many a more accomplished jazz singer, but there is, however, something a little infuriating about one of the great trumpet players of the era singing a verse and then scatting where one might expect a solo; especially as, when he does play, he’s at something like his best. To put it into perspective, just the year before, Davis had released his stunning soundtrack to Louis Malle’s Ascenseur pour l’échafaud, a restless, dynamic piece of group improvisation that strove to transcend the idea of musical genre altogether. There are lots of differences between Miles Davis and Chet Baker as players, but the biggest one is fundamental; Miles’ music was jazz by default, because that happened to be the term for improvised music using the instrumentation he used; but Baker loved playing jazz.

It’s that love of jazz that makes (Chet Baker Sings) It Could Happen to You a bittersweet record. The trumpetless tracks are lovely, but as the album continues with a languorous “I’m Old Fashioned,” it becomes clear that it’s mostly thanks to Drew that the album doesn’t just sound like some Rat Pack-style, easy-listening croonfest. Drew brings the same sense of clean inventiveness to the album that Teddy Wilson had brought to sessions with Billie Holiday a decade earlier and it infuses even the tongue-in-cheek schmaltz of “Everything Happens to Me” with charm and vitality.

When Chet does play, he effortlessly lifts the album to the level that Drew establishes on the opening tracks. A breeze through the ‘20s pop hit “You’re Driving Me Crazy” features a bright, ebullient Baker solo that blows away the decades of dust and makes it sound like a bop-era classic. And it’s this seamless melding of the “difficult” jazz of the ‘50s with the older, more melodic tradition that makes Baker’s music so appealing; on songs like the superb “My Heart Stood Still,” the band embodies both trad and mod styles; check out (again) Kenny Drew, his playing drawing equally on bop and the blues. The album’s main appeal is its freshness, but there’s more to it than just youthful joie de vivre, even on over-familiar songs like “The More I See You” Chet takes chances with the rhythm, both vocally and in his solo that the band skilfully makes sure he gets away with it. So, not exactly the cutting edge of jazz in 1958; but taken on its own terms what’s not to like?

From its opening seconds, the all-instrumental Chet Baker in New York, recorded in the autumn of 1958, is an entirely different kettle of fish. If It Could Happen to You feels like Baker relaxing with friends, here it feels like the presence of hard bop pioneer Johnny Griffin on sax in particular challenges and pushes Baker into some of his best performances, propelled by possibly his greatest rhythm section of Paul Chambers (bass) and (again) Philly Joe Jones.

The album kicks off with a driving “Fair Weather,” with Baker on fine form, his playing inventive and melodic within the tight, finely tuned but still atmospheric small group. Each player shines and Baker’s beautiful soloing is matched by an inspired, lyrical Griffin. But the group is adaptable too; subtle and sensitive on “Polka Dots and Moonbeams,” where pianist Al Haig shines on an extended solo over a beautifully sensitive, hushed Chambers and Jones. “Hotel 49” is a perfectly balanced cool bop with Baker and Griffin leading in together before an explosive Griffin solo, fast but perfectly judged, and when Baker comes in it’s with a solo that is hard-hitting, but also melodic and precise; undoubtedly indebted to Miles but with some of Clifford Brown’s energy too.

Speaking of Miles, the version of his “Solar” here is particularly interesting because it demonstrates how much Baker owed to Davis, but also the essential differences in their playing (one way of looking at it is Miles was better). Where Miles’ 1954 original showcases his sensitive, muted tone and gently exploratory lines, Baker’s more open, extrovert sound is less unorthodox but has its own edge of melancholy, while Haig’s delicate, almost classical solo is far removed from the dynamic bop of Horace Silver. But though not in quite the same league, the Chet Baker version makes up in energy what it loses in feel, with Jones/Chambers adding drive and power. By contrast, “Blue Thoughts” initially feels almost funereal, with mournful trumpet and sax from Baker and Griffin, but lifts during the solos into something that is less grim and wintry, but still introverted and features one of Baker’s most expressive solos on the album, matched by a restlessly inventive one by Griffin before the tune saunters to a reflective close. Chet Baker in New York ends (the bonus track “Soft Winds” included on previous reissues isn’t on this one) with a swing through Benny Carter and Spencer Williams’ “When Lights are Low,” covered by Davis a few years before on Miles Davis Quartet (1954). Baker’s version feels lighter, with more swing and that melodic mod/trad hybrid that Miles himself turned his back on as the decade drew to a close. It’s a beautifully warm, reflective ending to an album that proved that, despite records like It Could Happen to You, Baker was still a force in jazz, albeit one that belonged firmly in the 1950s, rather than transcending the era.

Later in 1959, the again all-instrumental Chet is well-named, despite the presence of perhaps the most prestigious group he put together, including big hitters like Bill Evans, Herbie Mann and Kenny Burrell, alongside the Paul Chambers/Philly Joe Jones rhythm section. It’s a collection of mellow ballads including standards such as “How High the Moon” and “September Song” alongside thankfully less well-worn tunes, and although its success is very much a team effort, the tone is dominated throughout by Baker’s trumpet at its most lyrical and romantic. In fact, his full, wistful tone looks forward to the sound he would develop in the mid-‘60s when he began to switch his trumpet for a flugelhorn. On the best songs, like the ravishing “Time on my Hands,” Chet plays with power and fluidity that easily cuts through the kind of banal sentimentality that the album could easily have turned into. This is thanks also to the band, who remain low-key throughout, proving that there is more to virtuosity than just solos.

Baker’s third and final Riverside album of 1959, Chet Baker Plays the Best of Lerner and Loewe is another lovely record, although it sees the artist drifting even further towards easy listening territory. Opening with one of its strongest tracks, a beautifully drowsy version of “I’ve Grown Accustomed to Her Face” that could be from Chet, it’s a superbly produced album that suffers most of all from its choice of material. Baker may have been influenced by Davis’s Porgy and Bess, which was released in the Spring of ’59 (Baker took his band into the studio that summer), but whereas Gershwin’s 1935 work was an opera of some depth which drew on folk traditions, the milieu of post-slavery African-American life and jazz, Lerner and Loewe’s My Fair Lady (the source of half of the songs covered here) was pure Broadway entertainment, as were Brigadoon and Paint Your Wagon. The band — not quite as stellar as on Chet but still featuring Herbie Mann, along with Zoot Sims (alto/tenor sax) and the superb drummer Clifford Jarvis, plus icon Bill Evans on a couple of tracks — is undeniably great, but there’s only so much one can do with such familiar confections as the waltz-time “I Could Have Danced All Night.” They give it a good shot, though, salvaging some proto-Dave Brubeck-ish passages from the schmaltz. Less immediately familiar songs like “The Heather on the Hill,” another pretty ballad, fare much better, with Baker’s tone at its most limpid and romantic. In fact, this is the pattern for the album; for every song that creates something distinctive, there’s another that can’t transcend its utter familiarity, although it should be remembered that at the time songs like “On the Street Where You Live” and “Thank Heaven for Little Girls” were only a few years old. Still, the feeling on these songs, for all the virtuosity involved (and Baker and Sims in particular are in excellent form throughout) is of “jazz moods” style muzak, far removed from the cutting-edge jazz that Baker had been making with the Gerry Mulligan Quartet only five years earlier.

With all the caveats above, these four albums document a great artist at his commercial and (intermittently) creative peak, but more than that, they showcase the real beauty of a small jazz group where each part is contributes equally to a whole and preserve the sound of an era. No expense has been spared in the production of the records, the remastered sound is beautifully crisp and clear, and presented on 180-gram vinyl they are an irresistible slice of music history.