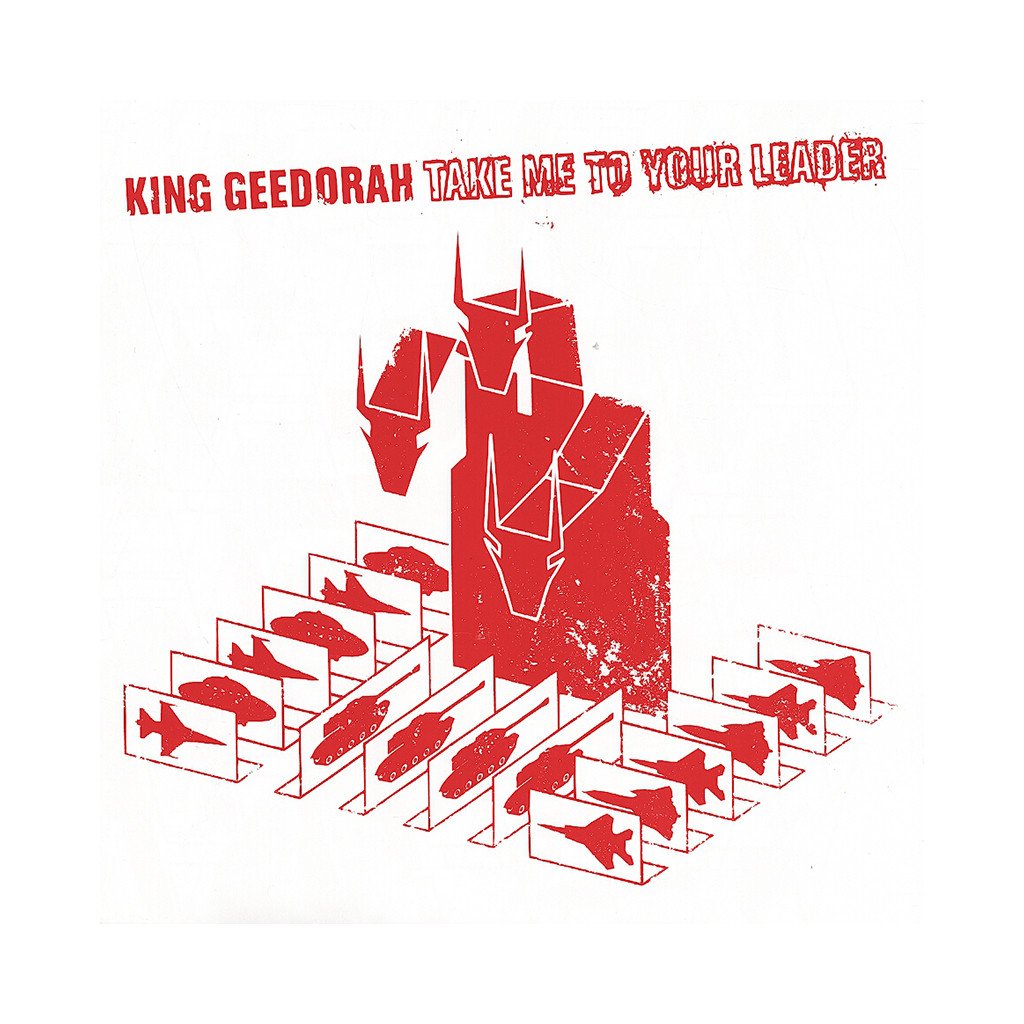 In Toho’s canon, the great kaiju and Godzilla arch-nemesis King Ghidorah is many things. Well, really, he’s just one thing: a giant, three-headed dragon. That’s scary enough, but the canon is deliciously murky on the exact nature of his existence. Sometimes, he’s a god from a different dimension. Elsewhere, he’s a planet-killer sent from somewhere out in the farthest reaches of space, or most boringly, he was designed in a lab and sent back from the future to fuck up Japan (and, yes, the rest of the world). This is one of the most fantastic things about King Ghidorah – he’s always King Ghidorah, but his place in the world changes at the whims of the writers and makers of each movie he’s in.

A multi-headed snake monster from another dimension is, perhaps, the best way to view Daniel Dumile, aka MF Doom, his many faces just a series of different heads of the same beast. Whether he’s Dumile, MF Doom or Zev Love X, he’s an ever-shifting entity that always comes back to the same brilliant man. By 1999’s Operation: Doomsday, he’d learned to own that truth, though it wasn’t without psychological ramifications. Doomsday signaled the subtle beginning of Dumile’s love of assuming an ever-shifting array of personalities, appearing under the name King Ghidra on “Red and Gold” and “Who You Think I Am?”. The title of the latter begins to feel less rhetorical and more a legitimate request for an answer in hindsight: once Daniel Dumile, then Zev Lov X, and now MF Doom, Metal Fingers and King Ghidra, “Who Do You Think I Am?” sounds like, “No, really, who am I?” No wonder he spent a lot of the four years between Doomsday and Take Me to Your Leader, his first-and-only album under the name King Geedorah, outside of the spotlight.

And so, this time period is one where Doom as a rapper and star largely takes a backseat. A year later, he released the split EP with henchman MF Grimm wonderfully called MF EP, in which his half is entirely instrumental. This dovetails nicely into releasing the first three volumes of Special Herbs, his 10-volume instrumental series — a series we’ll cover in a later feature. It also sees the supervillain appearing in other people’s stories — he shows up in 13 different tracks with Aesop Rock, Prince Paul and Prefuse 73, and a whole gaggle of other rappers, seemingly just because he felt like it. This apparent desire to step back from the limelight after striking gold is one of the most relatable things about the man. Then, a mere five months before Take Me to Your Leader, MF Doom ditched King Ghidra and appeared for the first time instead as King Geedorah as the producer of six tracks on Escape from Monsta Island!, the first/only album by the MF Grimm-founded rap collective Monsta Island Czars, a group where each member performed under the name of different Godzilla baddies, like Biolante (Kurious Jorge), Rodan (Zymeer) and Megalon (Tommy Gunn, who appeared as both Megalon and under his own name on Operation: Doomsday). The group never made another album — Grimm himself was in prison and himself didn’t appear on Escape — but it served as an unlikely starting point for King Geedorah to assume control of his own universe.

Take Me to Your Leader isn’t your typical Doom record. Like the mad men who made King Ghidorah whatever they wanted, so follows this record. It exists somewhere in between Doom’s recent activity with the Special Herbs series and his solo albums — like Special Herbs, the supervillain largely keeps his voice out of the proceedings and focuses on weaving a tapestry of beats and sample-wizardry, only showing up on about half of these songs. Confusingly, though brilliantly, Dumile, ever the chameleon, appears on three forms here: as King Geedorah the rapper, Metal Fingered Villain the producer and MF Doom the rapper, who features on “The Final Hour” and “Anti-Matter.” Behind King Geedorah is an army of monsters and rappers, and allowing him to give Grimm the chance to appear as Jet-Jaguar for the first time alongside fellow Monsta City Czars Rodan and Gigan, as well as the mysterious Mr. Fantastik, who will appear a year later on MF Doom’s Mm.. Food. This is all to say, Take Me to Your Leader is as much about King Geedorah as it is everyone else on the album — the king holds his head no higher than anyone else, an aspect democratic enough to make one question what kind of monarchy let this guy in.

No matter the moniker or villain, excellent performances abound from everybody involved. King Geedorah, of course, drops absurd rhymes — on “Fazers,” he rhymes “knee-drop” with “ZZ Top” mere moments before making a “Sussudio” reference. On “The Final Hour,” he uses the 49-second length to namedrop Canadian monsters and rag on sucker emcees: “Put a choke hold on the monster from Ogopogo/ Whoever did they vocals and also they so-so logo/ That’s a no-no.” He appears alone most of the time on Take Me to Your Leader, except for the wild and claustrophobic “No Snakes Alive,” which sees Geedorah, Jet-Jaguar and Rodan doing their best to avoid being drowned out by the Fist of the North Star sample that runs along with them. At times, the trio begin to rap frantically fast, almost as though they’re trying to get their rhymes out before the beatless and dread-drenched sample envelops them all.

Take Me to Your Leader wouldn’t be anything without its villains and guests, who are often given a song to themselves. Biolante drops the phenomenal line “Tell ya take it back, straighten, money makin’/ Vital sign: Awaken. Idle minds go to Satan/ No debatin’ on the vestle that we navigatin’/ Gravitatin’, schemin’, leave ’em standin’ waitin’/ Specialize in futuristic mental picture paintin’” on “Fast Lane,” while Gidan gives us the butter-smooth “Krazy World” just one track later, assuming the role of monster-turned-pimp, boasting about his pinstripe slacks and Siegfried shirt over a chopped-up 5th Dimension sample. Later, on “Next Levels,” Lil’ Sci, ID 4 Winds and Empress Starhh (who will show up again in a few years on Born Like This’ indispensable “Still Dope”) play verse tag-team so smoothly, you’ll be angry that they aren’t an established hip-hop trio. And, with the album standout “Anti-Matter,” the duo of MF Doom and Mr. Fantastik, you’ll find yourself even more angry that there isn’t an entire Madvillainy-esque album where the two can rage with glee over the villain’s fantastic beats.

The point of Take Me to Your Leader isn’t even the rapping itself, though — that’s only a piece of the puzzle. Doom’s abilities as a splicer of audio — first seen all the way back on KMD’s Mr. Hood, where he cut up old tapes to have conversations about jewelry and haircuts with the titular character — only grew in the 12-year gap between the two, this time seeing him widen his source material to everything from Hanna-Barbera cartoons to Charles Bronson classics to, of course, Godzilla movies. Some of these songs don’t even have anyone on them, like “Monster Zero,” “Take Me to Your Leader,” and “One Smart N**ger,” which are just monster-centric conversations fused with neo-soul samples — marvel at how “Take Me To Your Leader” deftly combines Foghorn Leghorn and Fist of the North Star, a true marvel of editing. And when you look at “No Snakes Alive,” which manages to be one of the most compelling songs on the album despite frequently operating without any kind of rhythmic beat of any sort, you almost feel jealous of Doom’s ability to build atmosphere with tools that shouldn’t work for hip-hop. It’s nothing short of remarkable.

Returning himself to a place closer to the spotlight did the trick for Dumile, who expanded his reach further than ever. Two months later he’d drop Vaudeville Villain under the too-obvious name Viktor Vaughn, and within a year he’d go on to start Madvillain with Madlib, turn in a profile-revitalizing spot on “November Has Come” from Gorillaz’ blockbuster record Demon Days, and put out the immaculately weird Mm..Food, once again under the MF Doom name. Take Me to Your Leader is easy to remember as a stopgap, or as a training ground for the supervillain to get his footing again as the unlikely star of his own productions. On its own, though, it can be… well, to call it “forgettable” is wrong — this is, as this very site told you nearly a decade ago, one of the weirdest hip-hop albums of the aughts, and is thus entirely unforgettable — but, at very least, it’s easy to discount. But that’s a mistake: Take Me to Your Leader is a rough ride at times, and in moments, it can feel a little off-putting, but considering how much we’re able to learn from it about the man behind the metal mask, it’s arguably just as vital as any other album he made under any name.