There have been few artists with such a diverse catalogue as PJ Harvey. Each album in her 30-year career comes as a reaction, intentional or otherwise, to its predecessor. That’s nowhere more obvious than when comparing Is This Desire? (1998) with Stories from the City, Stories from the Sea (2000).

Both albums have now been packaged with demos as part of Island’s ongoing re-issue programme. The contrast is all the starker in the light of reappraisal, with the former being as challenging and dark as the latter is commercial and accessible.

The sounds reflect what was going on in the Dorset musician’s life. Ill and unhappy after her separation from Nick Cave, Is This Desire? offers a parade of desperate, tortured and heartbroken women that seem to have emerged from a damaged psyche. The album’s predecessor, 1995’s To Bring You My Love – excluding 1996’s collaboration with John Parish, Dance Hall at Louse Point – widely introduced character in her writing. Here was a woman who drowned her children and made Faustian pacts to be with her lover.

Yet here it’s tempting to read a bit of Harvey into each of the characters, whose tales are told via printed lyrics for the first time. Key to understanding this is “My Beautiful Leah,” the demo of which shook her so badly during playback that she put recording on hold for nearly a year. During this time she went into therapy and moved into the basement flat of a house owned by collaborator John Parish and art director Maria Mochnacz. When the sessions resumed, they relocated from a small studio in Yeovil to London.

It was, by all accounts, the hardest album she recorded and the one that’s the most compromised by record company input. In 2004 she nonetheless told Filter magazine that it was her favourite. “I was making extremely difficult music, experimenting with techniques I hadn’t used before and not really caring what other people thought about it,” she said. 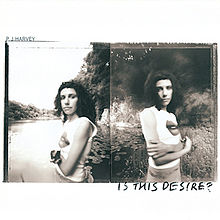 It’s easy to see why she found “My Beautiful Leah” so troubling. Its deep synth bass could be an extension of “Working for the Man,” from her previous album, but here the distortion is rendered nightmarish. Cymbals crash despairingly around a vocal that’s so deadened it’s easy to believe her when she wails, “She only had nightmares/ And her sadness never lifted.”

If anything, the demo version is even harder to listen to than the studio recording. Taken alongside the banshee wail of “Joy” and the dark electro of “No Girl So Sweet” it’s closer to gothic industrial music than the brittle blues for which she made her name. The tracks help to explain why the album sold less than its predecessor and received more muted reviews than usual.

This reception came despite it featuring her highest UK chart placement with lead single “A Perfect Day Elise.” Influenced by trip-hop and constructed around looped drums, it’s the album at its most commercial and polished. Yet listen closely and it could have been lifted from Nick Cave’s Murder Ballads, being the tale of a woman who’s murdered by her lover to prevent her from ruining his perfect day.

The trip-hop element is present elsewhere and hints at the new techniques she was experimenting with at the time. This is most apparent on “The Garden,” one of the album’s few other commercial offerings, where the drum creates a jazzy backing for a subtle organ and piano line. It forms a sharp contrast with the demo, which is primarily Harvey accompanied by guitar, which shows a fascinating evolution of a track that’s lyrically rooted in her long-standing fascination with biblical imagery. Seemingly reframing Adam and Eve with two men, it follows one of them as he walks around, “thinking of his sins.”

The title track also demonstrates the progression from guitar-driven sounds towards more atmospheric, textured compositions. Its basic structure, built around a lazy guitar lick, is present on the demo but the distinctive percussion that opens it and which lends it a sharply minimalist focus is absent. In both forms there’s a vulnerability as she questions the nature of desire, with two lovers wondering whether it’s “enough, enough/ To lift us higher?/ To lift us above?”

This reflection on the all-consuming nature of passion contrasts markedly with the craven women found elsewhere on the album, or on its predecessors, and demonstrates the personal as well as musical growth that Harvey underwent during recording. It brings belated relief to the women who occupy the tracks like ghosts, each one with their own vocal style. There’s the whispered delivery on “The Wind”, on which creepy electronics emulate “noises like the whales;” the velvety “Catherine” who will “damn to hell every second you breathe;” and the melancholy “Angelene,” who’s the “prettiest mess you’ve ever seen.”

Harvey’s investment in these characters took its toll – she’s admitted that work on the album was detrimental to her health – but it may have belated returns. The re-issue reveals the inner workings of the songs, with the basic four-track demos being loaded onto a multi-track recorder and used as the foundations for the studio versions. This gives remarkable insight into her work process, especially the use of electronics.

It remains a frustratingly patchy album but while it undoubtedly challenges the listener it also offers some of her most tender and experimental recordings. It’s a shame that she never returned to these sounds but it fits in with her endless quest to change and develop that she followed it up with Stories from the City, Stories from the Sea.

A conventional college rock album, its relaxed and largely carefree sound is in direct contrast to the fraught, protracted sessions that produced Is This Desire? Recorded in just two months (March to April 2000), it’s been described as her New York album and its lustful nature has been attributed to a never-confirmed relationship with actor Vincent Gallo (who could be the “dirty little secret” in “This is Love”).

Noncommittal about specifics, she nonetheless told Q magazine that she challenged herself to create “absolute beauty.” Spurning the darkness of her last record she wanted it “to sing and fly and be full of reverb and lush layers of melody. I want it to be my beautiful, sumptuous, lovely piece of work.” It’s a fairly accurate summation of a record that’s immediate, outward looking, and optimistic.

She started to work on the album while filming The Book of Life with Hal Hartley in New York, where she lived for nine months. Although she wrote other tracks in Dorset and London, it has the seediness and edge of the city. Infused with the kind of language that’s associated with Patti Smith or Chrissie Hynde, the lyrics tumble over the Empire State Building, whores, freeways and heroin. 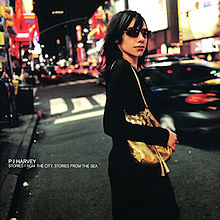 Both artists shadow the album with its big, ringing chords and bluesy riffs. These are given a radio friendly polish that, paired with stadium choruses, are musically unadventurous but suffused with an energy that makes it compelling. A large part of this vitality comes from her heady, joyous representation of love and sex. No longer is it a source of pain and obsession. Instead, it makes her feel invincible (“I’m immortal when I’m with you”), young and carefree (“I feel the innocence of a child”), and there’s a sense of acceptance when it ends (“thank you/ I don’t think we’ll meet again”).

There’s a loose narrative arc to the album, starting with the starry-eyed wonder of a new relationship and ending with separation. Presented in a conversational style and with so many vivid details, it has the ring of truth that excuses bad rhyming schemes (complex/ undress being particularly wince inducing).

This perhaps false sense of intimacy is encouraged by Harvey’s delivery; unlike previous albums she dispenses with character to sing in only one full-throated voice. It’s the perfect style for the basic rock ‘n’ roll of “Big Exit” and “This is Love,” and for the blues-rock of “Kamikaze” and secret track “This Wicked Tongue.” These latter two feel like a missing link to post-Rid Of Me material such as “Naked Cousin” and her cover of “Wang Dang Doodle.”

Yet despite being partly created in the home of The Strokes, whose Is This It was released less than a year later, the album has little in common with the dominant alt-rock scene. The percussion on a couple of tracks, including “A Place Called Home” and “We Float,” has the slightly dated sound of dance-rock. Those that have aged better tend to be the quieter, more reflective moments.

Prime among these is “This Mess We’re In,” on which Thom Yorke takes lead vocals. Harvey seems to have taken great delight in making him sing atypical lyrics: “Night and day/ I dream of making love/ to you now baby,” he quavers on a track that never quite releases its tension. The song is the one of most interest on the demos, with Harvey taking the lead vocal line on an almost otherwise unaltered arrangement.

The other track of note on the demos is the closing number “We Float.” The drum pattern and piano line haven’t aged well but what’s striking is that it has a harder, more brittle feel than the studio version. A meditation on the end of a relationship, the final take has a warm tone that reflects its lyrical acceptance that, “we just kind of lost our way.” Her voice soars as she repeats the title, bringing a relief and acceptance that’s hard to reconcile with the artist who created Is This Desire?

The album’s immediacy made it her second most successful to date, going on to win the Mercury Prize. The celebration of this came to be intermingled in horror. Held on 9/11, she made her acceptance speech from a hotel room that overlooked the wreckage of the Pentagon. It’s possible that this experience affected her feelings towards the album, which she subsequently admitted she found unsatisfying.

Harvey told Mojo, “I felt like I got lost around that record. I wanted to try writing lots of perfect pop songs [but that] isn’t where my heart is at.” These might not be perfect pop in any chart sense but they are as commercial as she ever got. If they lack the depth that usually makes her so rewarding then they at least show a freewheeling, playful side that her career has never revisited.