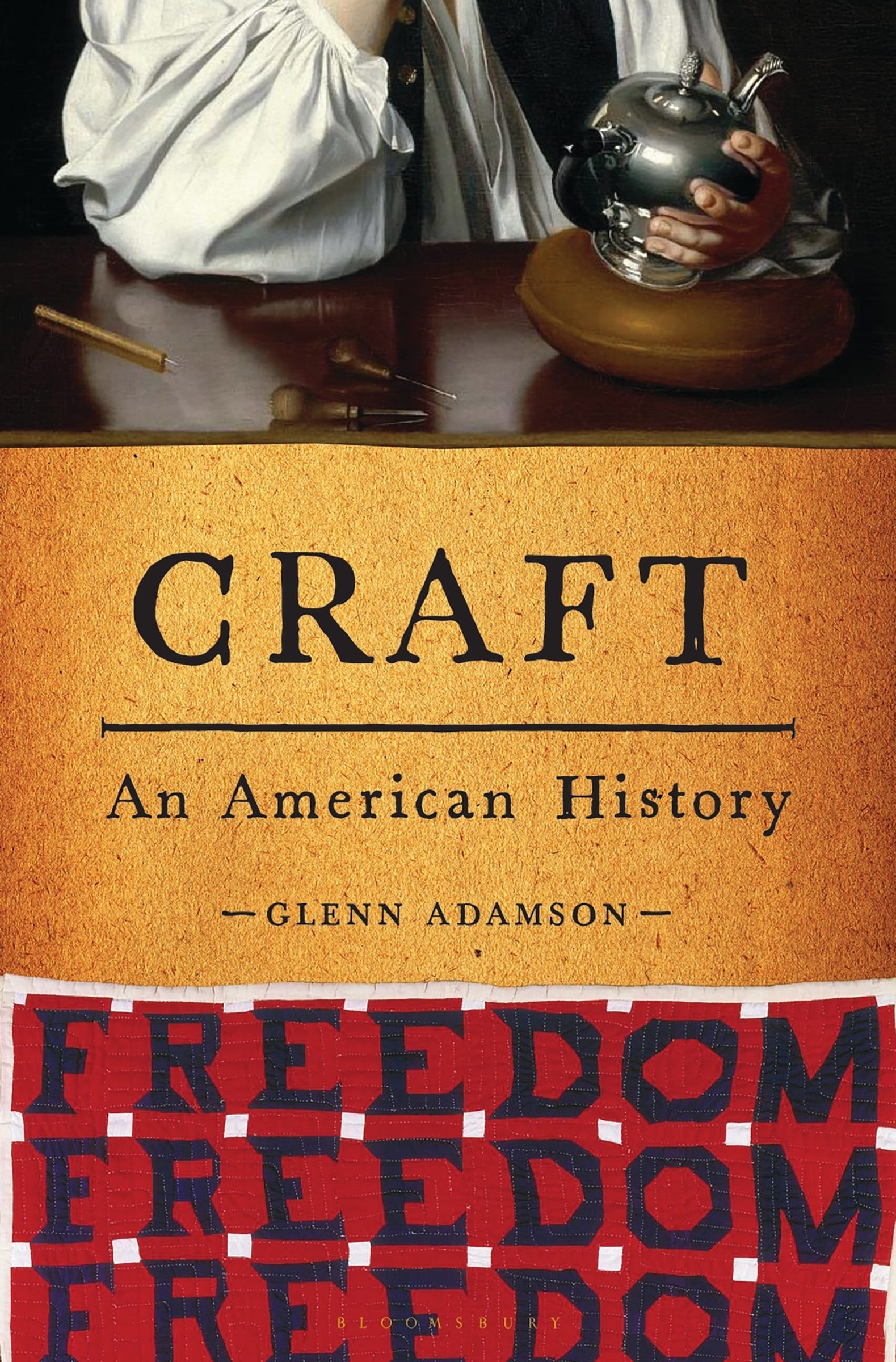 Glenn Adamson’s Craft is a distinctly American history, sketching the story of the United States through the lens of craft as industry, commodity and art. The history begins with craft as an aspect in the relationships between native people and Colonial settlers, moving to the founding of the nation, the Civil War and Reconstruction and gradually forward from there. Adamson expertly weaves together histories of craftspeople whose lives are not widely known along with those of better-known individuals. Fundamental to this history is the craftwork of Native Americans, Black Americans and women. As a history spanning some 250 years, Craft is also a history of how marginalized groups have struggled over time as well as the role that craft played in those stories. The story of Frederick Douglass’ life, marking a significant saga moving from slavery to freedom to influence, is a focus for Adamson as well, as Douglass implored freed Blacks to learn a trade as a means of creating a livelihood.

Because the majority of contemporary objects are manufactured rather than made by hand, the vast categories of craft don’t readily come to mind. Adamson relates the histories of silversmiths, weavers, wood carvers, furniture makers, potters and others who created the everyday objects of life before, and in more specialized ways after, the Industrial Revolution. The presence of objects so taken for granted today is contrasted with colonial times, where sewing was routinely taught to young women as a skill that would be useful in their daily lives. Yet when the Revolutionary War began, women put their craft to purpose in sewing uniforms for men going into battle. The presumptive best-known American craftswoman, Betsy Ross, may or may not have designed the first American flag, but the significance in this narrative is to recognize the tremendous significance of craft in American culture.

The Industrial Revolution transformed the role of craft: with the mechanical production of uniforms, flags, clothing and furnishings for the home, craft was no longer necessary. At the turn of the 20th century, Adamson details the place of craftspeople in a transformed culture. Were people who made things by hand producing everyday objects for everyday people or producing works of art for the privileged and wealthy classes? Luxury craft and amateur craft coexisted and have continued to thrive together in various guises since then.

The Arts and Crafts Movement began to thrive in the United States as a response to the drab sameness of manufactured goods. This was also a philosophical gesture allied with progressivism, both trying to create an improved culture through advancements in science, technology and social reform. Jane Addams’ Hull House in Chicago was central to both, hosting the Arts and Crafts Society when it began in 1897. The Arts and Crafts Movement included both craftsmen and craftswomen, although the idea of craft was, and remains, gendered by practitioners, advocates and even politics. Considering the popular image of Theodore Roosevelt as a virile outdoorsman, it is unsurprising that he embraced craft as a way to build character while building things. Roosevelt believed that physical labor was fundamental to the strength of the nation and that all men should participate.

To some degree, craft is stitched into every cultural and social movement in U.S. history. As part of the WPA, the Federal Arts Project put thousands of artists to work creating murals, sculptures and public arts across the country. Here we begin to see a recognition of what might be considered homespun craft as an art: folk art that represented everyday life. The distinction made now between the preciousness of folk art and the elitism of high art was not used then to diminish craft, even in museum exhibitions.

World War II created another intriguing contrast. The U.S. Army provided more than 400,000 soldiers with Handicraft Kits with material for craft activities including wood carving, clay modeling and leatherwork. The kits were designed to stave off boredom and offer a creative outlet. Research conducted on internment camps shows that Japanese Americans living in the camps–who were not handed craft materials–made use of scarce resources for craftwork with the intent of adding a small degree of beauty to their otherwise loathsome surroundings. Adamson notes that professional craftspeople in the camps took the opportunity to train others in skills such as woodcarving and embroidery despite their limited resources on hand.

The postwar years show another gender divide in the popularization of craft. Teen girls were encouraged to learn sewing and teen boys were celebrated for their craftsmanship with hot rods. The culture divide between the counterculture and the conservatives that marked the ‘60s played out in terms of craft as well, with amateur makers on one side and skilled tradesmen on the other. Although the hippies were amateurs who tended not to invest much effort in their work, the term craft remains attached to the counterculture in the cultural imagination.

Finally, Adamson considers Etsy, pussyhats, the maker movement and 3D printing as contemporary articulations of craft. Despite the many contrasts he points to on his journey through history, Adamson ends with the idea that craft always articulates relationships between individual and community. If those relationships allow people to see each other as part of the same community, crafting can build, along with useful goods, cooperation and peace.