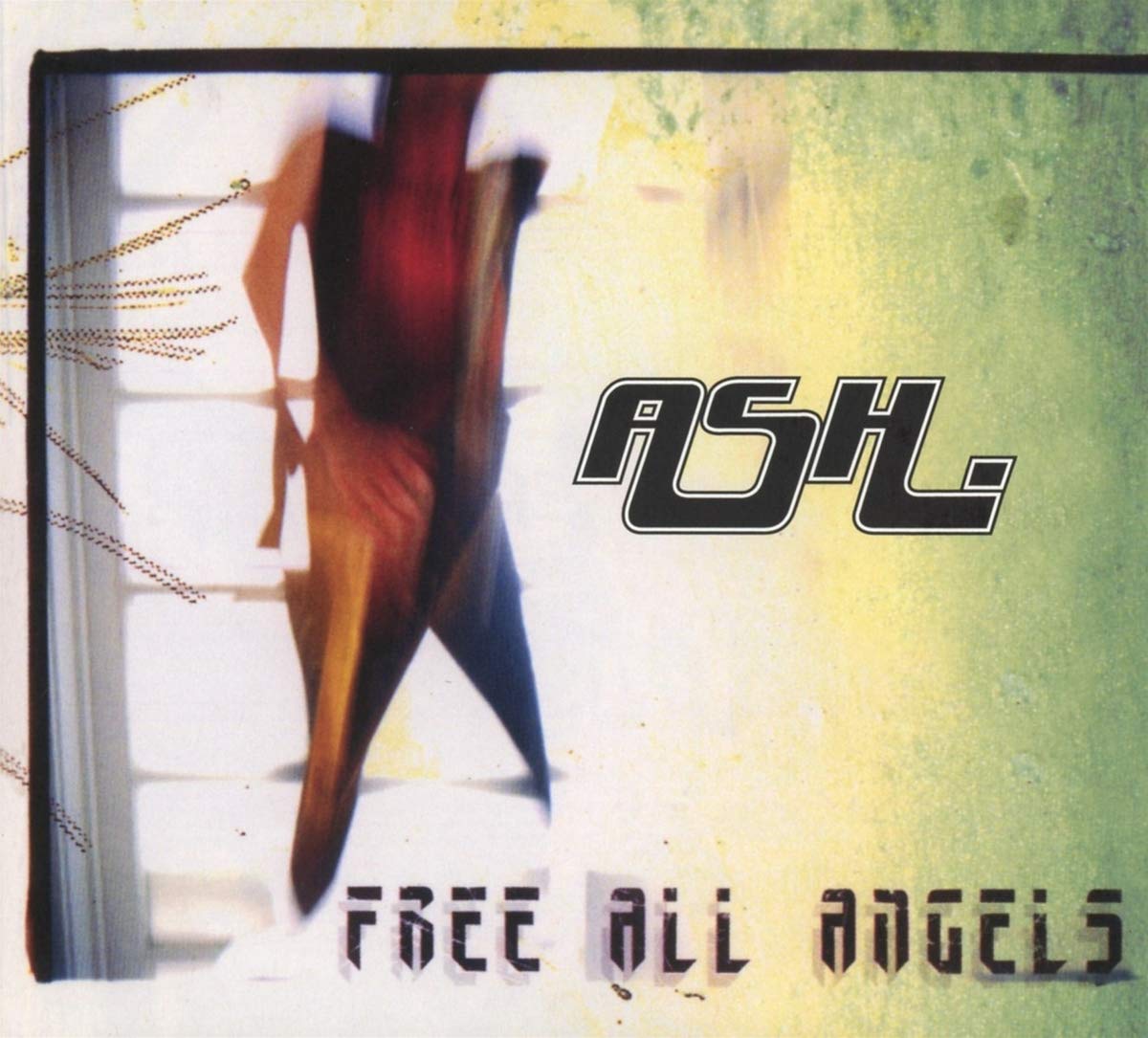 Free All Angels is in part an album preoccupied with the stars aligning, with chance and transience, but in early 2001, nothing suggested that Ash’s own time had come. The third studio album by a band in apparent commercial decline, and whose one real trademark had been youthful exuberance, it nevertheless went on to chart worldwide, hit the number one spot in the UK and provide five Top 40 singles. The musical context is important; although Free All Angels is true for the most part to Ash’s teen-punk spirit, with the benefit of hindsight it’s clear that the way for the band’s resurgence in the UK was paved by the phenomenal success of post-Oasis indie guitar bands at the end of the millennium. There was, it was clear, an appetite for guitar music, but the once vibrant and experimental UK indie scene was now actively courting middle-of-the-road blandness and stadium audiences, and if Free All Angels itself sounds a little stodgy 20 years on, the contrast with resolutely meat and potatoes bands like Travis and Coldplay made it seem explosive at the time.

When Ash emerged from Downpatrick, Northern Ireland as a trio in 1994, they initially rode on a wave of hype generated by their youth (the members were 15 years old) and songwriter Tim Wheeler’s way with a catchy pop-punk melody. Carving a niche for themselves parallel to, but outside of, the Britpop movement, their silly, energetic pop-trash-culture singles like “Kung Fu” and “Girl from Mars” were a refreshing alternative to the self-consciously laddish, heritage rock attitude of Oasis, the Bowie-fuelled glam posturing of Suede and the postmodern cleverness of Pulp or Blur. By the millennium though, that early goodwill was long-forgotten, killed partly by age (though still younger than the big indie stars of the era, Tim Wheeler’s age was no longer remarkable in itself) and partly by a failure to mature in a way that harnessed the virtues of their style. Their second full length album, 1998’s Nu-Clear Sounds was, despite the enlisting of guitarist Charlotte Hatherley to create a more rounded, grown-up sound, a patchy, often uninspired affair that showed the band sounding trapped within their guitar-rock limitations while striving for something more – and losing their knack for a good tune.

With Free All Angels, it sounded as though their existential crisis had passed; fully embracing their (admittedly not especially deep) power-pop roots, the band concentrated on straightforward catchy songs without chasing the pop lightness of their 1996 debut album, 1977. That’s not to say that Ash had left the teenage world they had created behind; in fact, what makes Free All Angels superior to its predecessors – and the best album the band ever made – is that it embodies the consciousness of the end of teendom, of youth slipping away. Which may sound melodramatic, especially in a band then still only in their mid-twenties, but Ash had spent the years since the release of their debut single in 1994 – with a brief interlude to finish school – on a relentless treadmill of recording and touring, with the relative failure of the singles from Nu-Clear Sounds (their first releases to not chart higher than their predecessors) serving as a rude awakening that perhaps their time had already passed.

Opener “Walking Barefoot” sets out exactly what the mature Ash could do; it has the energy of “Kung Fu” but with a sense of dynamics and songwriting that had been honed on the road as the band had extensively toured as the opening act for groups like Weezer. It sounds as though Wheeler (the band’s main songwriter) had examined Nu-Clear Sounds, looked at what worked (pop hooks, straightforward lyrics) and discarded what didn’t. Plus, there was some depth now too; the acknowledgement of the passing of those teenage years the band encapsulated in their early work pervades the whole album. There are no world-weary theatrics, just the rueful acknowledgement that teenage dreams are for teenagers and that the time and freedom teenagers take for granted is hard to preserve.

“Shining Light” and “Burn Baby Burn” were the big summer singles, the former a straightforward, fairly laid-back but still ebullient love song that’s strength is in the wistful feeling that it’s the dark times that make the good times feel good. “Burn Baby Burn” is a return to a punkier sound, and is the third love song in a row, albeit a more desperate sounding one, embodying the band’s turmoil; “You are all I have in this teenage twilight.” The song displays the band’s sound at its most refined and aerodynamic; in place of the dense wall of guitars of Nu-Clear Sounds the instruments – particularly the bass – are clearly delineated (if still dirty) and even when soloing, the guitars serve the song; it’s a concise, focussed sound that gives the album its best moments.

One of the keys to the album’s success is its sequencing, with no more than two songs in the same kind of tempo to prevent monotony; simple commonsense, but immediately an improvement on Nu-Clear Sounds. The first dramatic change of pace is “Candy,” another single which, after a intro of soaring strings recalling the Walker Brothers’ “Make it Easy on Yourself,” becomes a catchy but slightly sickly ballad of sorts. Like several of the album’s lesser tracks, it manages to avoid radio rock cheesiness, (never really a problem with Wheeler’s unpretentious vocals) but has a gritty modern edge to the sound, influenced by then-current dance music, which now feels quite dated. “Cherry Bomb,” is a return to the simpler punk days of 1977, complete with self-consciously ‘teenage’ lyrics, while “Submission,” with its monotonous distorted vocal, draws on the dance/rock zeitgeist of acts like The Chemical Brothers and The Prodigy; harsh and catchy, it succeeds by stopping just short of outstaying its welcome. At this halfway point, the pattern for the album is set; noisy power-pop (like “Pacific Palisades,” which sounds like an updated version of the godfathers of Northern Irish punk, The Undertones), interspersed with more reflective songs like “There’s a Star” and the band’s most successful ballad, the extended sigh of “Sometimes.” This was another single, and it documents the end of a relationship with a chorus which could equally refer to the band’s wilderness period; “Sometimes it happens feelings die/Whole years are lost in the blink of an eye/We once had it all but events conspired.”

The album draws to what at the time felt like a triumphant close with “World Domination”, a tongue-in-cheek blast of youthful arrogance that seemed fitting while Free All Angels dominated the charts and Ash played the main stages at festivals, but sounds hollow and a little tiresome now. In the end, Free All Angels remains a good album of its type – but that type – essentially straightforward indie guitar rock, was not in its most inspired phase at the turn of the century. The album, high in energy, occasionally low in charisma, turned out to be the pinnacle of the band’s career, rather than the beginning of the new phase it seemed to herald. The mid-2000s saw Ash releasing worthwhile material but struggling to find a place in a musical landscape where they’d been superseded by bands of their own generation who were just beginning to break through, like The Hives, and by a new wave of indie rock bands like The Libertines, Razorlight and Arctic Monkeys, to whose audience the mid-‘90s were ancient history.

Objectively, Free All Angels stands up pretty well as a collection of spiky, warm-hearted indie rock songs; and it may well continue to find an audience. The problem for those old enough to remember it is that its big hits – and best songs – are as redolent of student discos, heartbreak and hangovers circa. 2001 – as “Mr Brightside” was to become a few years later; which is perhaps fitting after all.