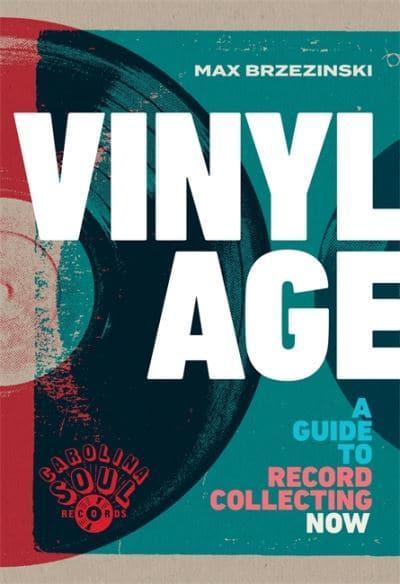 Disclosure: I’ve bought vinyl from Carolina Soul, the record store where Vinyl Age author Max Brzezinski works as marketing director. Not only that, but the shop, on consignment, also sold a record for me, and that sale is listed in an appendix to this book as one of the store’s all-time highest-priced Northern Soul records. So I have done business with Brzezinski’s operation, and know from personal experience that they know what they’re talking about. Still, whether or not you regularly use Discogs and paw through musty boxes in search of a long-lost gem, Vinyl Age will make you want to buy records. But more importantly, Brzezinski will make you want to listen to them.

That’s a crucial distinction at a time when some collectors may treasure the artifact more than what it contains. Yet as anyone who’s been lured by an attractive album cover well knows, that artifact is part of the equation. So in that spirit, Vinyl Age is a well and aptly designed object. Nate Smith, another Carolina Soul employee, created the book’s illustrations and graphs, which along with the medium-sized hardcover format gives this object the look and feel of a school text.

Vinyl Age is a textbook that music lovers will be happy to study. The subtitle, A Guide to Record Collecting Now, gets at the playing surface of its topic, but what that doesn’t explain is how much Brzezinski gets into the grooves. While chapters delve into methods and categories of records, this is by no means a price guide, despite the lists of high-priced records in the appendix. The author does note that part of the game is a fluid market; graphs chart the fluctuating prices of notable artists after their death—does the spike in prices of, say, Bowie records, or Prince records, remain well after their death, or do prices level off to previous levels? Likewise, the active reissue market doesn’t necessarily mean that original issues of an album will suddenly depreciate. Brzezinski also charts the rise and fall of collectible genres, which leads to some surprising revelations. For instance, it is argued that gospel records fell off in interest due to boomer/hippie mistrust in organized religion, while younger collectors who don’t have that stigma have been drawn anew to its musical pleasures—and are perhaps more open to its spiritual message as well.

But if you really love music, you don’t buy records for their market value, and regardless of one’s spiritual inclinations, the most devoted collector/consumer is invested in the experience and meaning behind a slab of vinyl: the music. Nearly half the book is dedicated to the varieties of musical experience, in the categories of time, voice, space and dynamics. That may seem daunting in the abstract, but as Brzezinski goes through each of these categories he describes records of varying levels of obscurity that demonstrate these concepts. Here’s where Vinyl Age becomes much more than a guide to the market. It becomes a wonderful book of music criticism. In this section as elsewhere in the book, subgenres are clearly defined, and it is in this final section that Brzezinski digs into what makes specific records click. For example, Shirley Murdock’s “The Beauty of It All,” “asks us to slow down so we can see the world anew.” (This is one of the more obscure records mentioned in the book; while Spotify and YouTube will help readers track down much of what’s described, the only online source to hear this track comes from a 2016 Carolina Soul gospel program, all of which is worth hearing).

As much as records and collecting are about objects, there’s something profound about what the grooves contain, and Brzezinski, a former English professor, digs deeper than other collectors might. In a section on singular voices like Robbie Basho, Brzezinski gets at an essential truth about the nature of music and communication as a whole: “Traditionally, people tend to think they can only identify with experiences that they can personally relate to their own life.” Yet certain singular voices, “rather than ask for identification… convey damage we can’t immediately relate to, and ask us to use our imagination in order to understand circumstances outside of our own.” Vinyl Age recognizes that we live in a time when records are more plentiful and accessible than ever, which means the listener’s imagination can be exposed to a greater range of personal circumstances than ever before. At a time such as this, how could one not be excited to listen to and try to understand circumstances and ideas far beyond their own? And just think — you can start this exploration at your local record store!