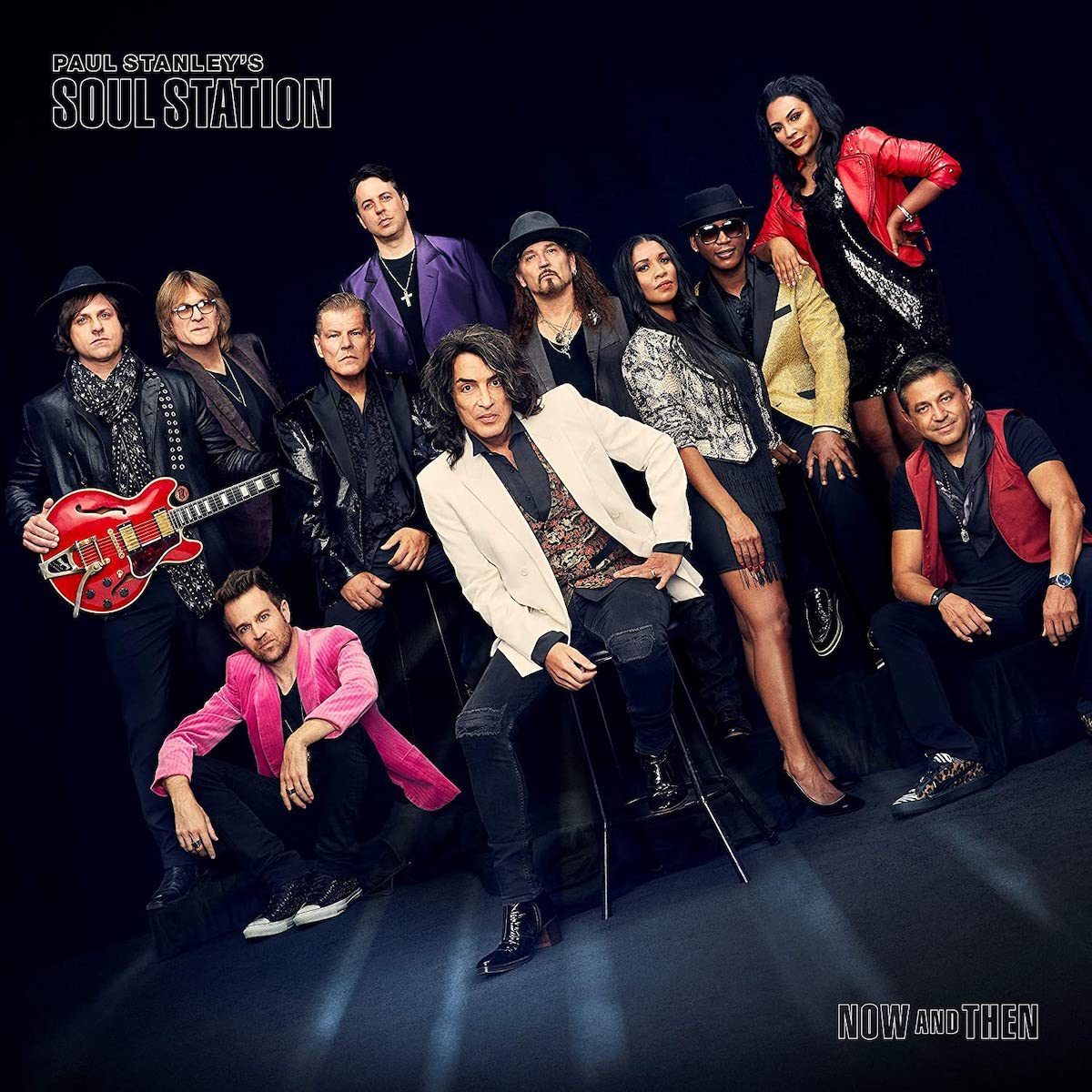 Gene Simmons is and always has been the most visible face of KISS, but Paul Stanley is the real heart of the band. In part, that’s probably because he isn’t tied to it; as well as the usual kind of rock star extracurricular activities — writing books, producing other artists, painting — he’s also taken part in less obviously fan-pleasing enterprises, such as playing the lead role in a production of Phantom of the Opera. For the most part though, KISS has fulfilled his needs as a songwriter and musician, with only two solo albums in the past 40+ years: his eponymous 1978 album, arguably the best and certainly the most KISS-like of the four that the band’s original lineup released that year, and the middling, occasionally heavy, pop-rock of 2006’s Live to Win. But, as the band name suggests, this is not quite a solo album, and Now and Then is a very different kettle of fish indeed. This is, naturally, a soul music/ R&B project and, as one might expect, it’s a big, bright commercial one, more Motown and ‘70s Philly soul than the gritty authenticity of James Brown or Bobby Womack.

Soul Station is a 15-piece band complete with a trumpet player (Jon Pappenbrook), a trio of excellent backing singers (Laurhan Beato, Gavyn Rhone and Crystal Starr) and a percussionist as well as the usual guitar/keyboards/bass/drums, and the album’s surprising freshness in in part due to their casual virtuosity and adaptability. Their bright, smooth sound brings a welcome lightness of touch to even the most well-worn tunes here. Which brings us onto the album itself; it’s a bold move to intersperse soul classics — and we’re talking about songs as familiar as “The Tracks of my Tears” and “Let’s Stay Together” — with your own material, but that’s what Stanley does and for the most part he gets away with it, especially because his own songs are stylistically very much in keeping with the lesser-known covers, such as the Five Stairsteps’ “O-O-H Child.”

The result is an album that has more of the sound and feel of a genuine, if slightly uneven, compilation of fluffy ’70s soul than the mishmash of old and new that it is. But if this is a testament to the talented and flexible musicians, it’s also a testament to Stanley himself. Although KISS is for all intents and purposes a hard rock band, its one that’s touched many bases within its narrow focus: ‘70s rock ‘n’ roll and glam, heavy metal, disco, ‘80s hair metal and even slightly unconvincing prog-metal and grunge—and it’s almost invariably the case that Stanley’s songs have been the most memorable. Even when the band has been creatively treading water — hardly a rare occurrence after their mid-‘70s peak — it’s usually the frontman who has added some much-needed sparkle to their work, offsetting the (intentionally) obnoxious posturing of Simmons with his own knowingly camp parody version of rock-god arrogance.

Still, the larger-than-life Stanley persona comes with its own pitfalls. Even within KISS’ music, the singer has never been noted for an aversion to schmaltz, so the organic freshness much of {Now and Then} displays is a welcome surprise. Even with the battery of silky strings and soulful backing vocalists enveloping the songs like a giant marshmallow, there are real performances at its heart, both by the skillful band and the singer who is — no surprise perhaps — confident enough in his abilities to let his voice be the focal point of the songs. It is indeed a strong and very distinctive voice, and even if songs like “The Tracks of my Tears” and (god knows) “Let’s Stay Together” are hardly improvements on the originals, they are at least easily distinguishable from karaoke. In fact, although those are among the best tracks on the album as songs, they are also the most skippable as the fine arrangements don’t really do anything special with them. They also show up a key Stanley trait, and one that is a virtue within KISS, but not elsewhere; the curious inability to hear when enough is enough, or too much. There is no doubt that Stanley has a powerful and distinctive falsetto, but a little goes a long way and at times (“Ooo Baby Baby” being the worst offender) you get much more than a little.

Overall, though, Now and Then is an album that has been put together and performed with love and care and its many highlights ― among them the warm and delicate “Lorelei” and the fresh and ebullient reading of the Four Tops classic “Baby I Need Your Loving” — give it a substance that makes it more than just the companion to a live show; which is presumably part of its raison d’etre. In fact, “Baby I Need Your Loving” is a little frustrating; sung by Stanley without any frills and in his natural tone, it suggests another possible album, more earthy and less showbiz, which, KISS and Stanley being what they are, will probably never be made.

Now and Then is, in a way, a highly commercial record. But whether it will find a wider audience outside of Stanley’s usual devoted following is hard to say. KISS, though very successful, is not the kind of band that attracts casual listeners in the way that even bigger and more iconic groups like the Beatles or Stones do, so Stanley’s wide-ranging songwriting skill and adaptable voice ― which would probably come as a surprise to people who wouldn’t normally check him out — may remain the preserve of the few and Stanley may remain a big, sparkly fish in a relatively small and dark pond; but he seems very happy there.