May 09, 2021
Home Books True Believer: The Rise and Fall of Stan Lee: by Abraham Reisman 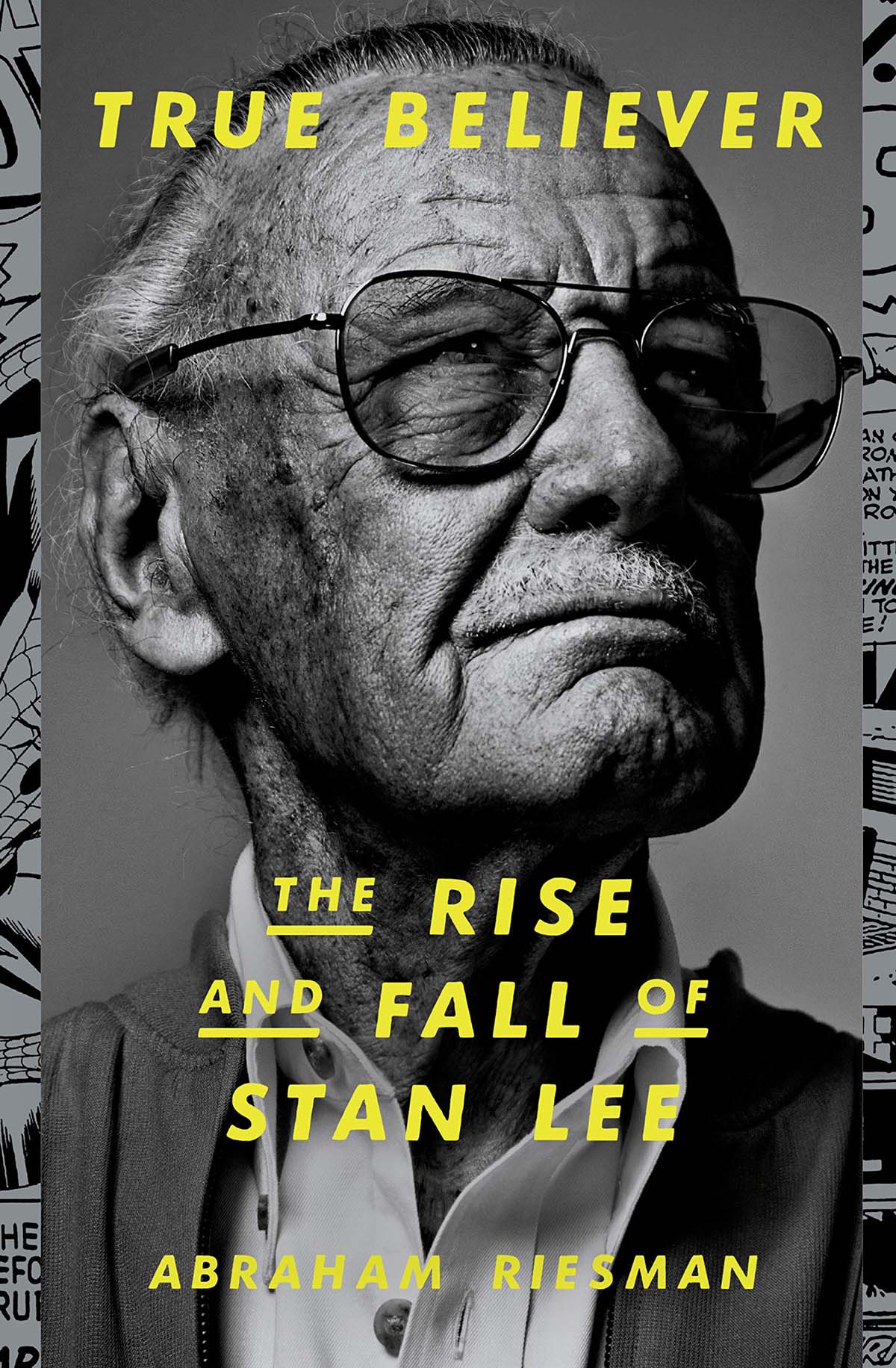 Over the last decade, as the intellectual property of Marvel Comics became the backbone of American pop culture, Stan Lee, already 85 when Iron Man hit theaters in 2008, became possibly the closest thing the country had to a living Walt Disney, a blend of established artist and P.T. Barnum-esque showman. As the retired legend making goofy cameos in the ludicrously budgeted adaptations of heroes he’d either co-created or shepherded into the Silver Age of comics, Lee ensured his last impression was of an avuncular, kind-hearted old man, at once comically befuddled and serenely wise in his brief appearances. And just as Barnum was a master of manipulating the facts for maximum interest, Lee shrouded his own life in manufactured narratives that Abraham Reisman seeks to unpack in True Believer: The Rise and Fall of Stan Lee, no mean feat as, according to the author, “Stan Lee’s story is where objective truth goes to die.”

Reisman puts himself in subtle opposition to Lee’s fabrications and lies of omissions from the outset simply by charting the family tree of the man born Stanley Lieber to Romanian Jewish immigrants, an act that runs counter to Lee’s lifelong suppression of his ethnic and religious heritage and his ambivalence toward his parents. Lee’s views toward his background are set against the heavy Jewish representation in the early comic book industry, producing something of a real-life Philip Roth tale of the impossibility of assimilationist self-denial. Lee’s decision to use his pen name over the one on his birth certificate is the first act in a lifelong arc of self-denial that allowed Lee to mold himself to be what he wished to present to the public, and Reisman makes this persona-crafting the core of his book.

The formative experiences of Lee’s relationship to Judaism form one of two major threads in the first act, the other being his exposure to the highs and mostly lows of the comic-book industry in its popular infancy and nadir in the post-Fredric Wertham censorship of the 1950s. As one of the only constant presences at Timely Comics, Lee was both subject to and perpetuator of the abhorrently exploitative labor practices that defined (and continue to define) the business, dealing with the notorious lack of artistic credit and usurious pay rates while also himself possibly helping to derail efforts to unionize the talent. Reisman paints a bleak portrait of the industry during this time, with mass layoffs a constant threat and Lee himself desperate to find a more respectable line of writing.

So harrowing are these early accounts that a pall of defeatism hangs over Lee even when he finds himself at the vanguard of an artistic revolution that not only rejuvenates Timely, now called Marvel, but the entire comic book industry. Much of this nagging atmosphere, of course, owes to the ongoing battle for credit that has weighed down the triumphs of breakthroughs like Fantastic Four and The Amazing Spider-Man. Lee was one of the first figures in the business to push to include artist credits in issues, but almost immediately he was claiming full credit for conceiving the burst of new, instant-classic Marvel characters of the ‘60s, much to the chagrin, if not fury, of artists like Jack Kirby and Steve Ditko, who alleged that they not only came up with the designs for the characters but handled nearly all of the plotting and structure of issues thanks to the Marvel Method, in which Lee gave artists the license to lay out issues they saw fit before adding dialogue later.

Crucially, Reisman does not belittle Lee’s accomplishments. He calls attention to Lee’s preternatural skills as an editor at not only finding talent but showing a keen eye for which writers to pair with which artists for maximum symbiosis. He shrewdly points out that Stan’s Soapbox and the generally accessible rapport he built with readers did as much to disarm fans and make them feel included as the actual content of the comics (and presaged the modern era of the celebrity as approachable). And he also takes care to point out as many holes in, say, Kirby’s stories over the years taking full credit for their work together as he does Lee’s contradictions. Still, the evidence that Reisman marshals to support Lee’s vindictive nature and deliberate obscuration of credit can be galling, be it examples of him passive-aggressively sniping at artists he begrudging gave writer credits in their issues, or the juxtaposition of a quote from the letters section of one comic issue in which Lee outright bashes Ditko’s then-upcoming hero Doctor Strange with an excerpt from the man’s later autobiography, Excelsior, in which he takes credit for conceiving the character.

That such squabbles coincided with Lee’s meteoric rise from writer to publisher and president adds another wrinkle to this saga; comics history is littered with squabbles between writers and artists over who invented which characters, but there is a fundamental power imbalance that makes Lee’s actions all the more damnable. Yet for all of Lee’s efforts to hog the limelight, Reisman uncovers letters and recordings that reveal the man’s lingering resentment for comics and his inability to make it in “real” writing. Lee’s creative peak is thus offset by an ambient sense of despair that weighs down what should be the highlight of his life, and it sets up the final, brutal section of the book that covers Lee’s life after leaving Marvel as an active employee in the ‘90s.

This last arc, covering Lee’s notorious failures with the fraud-laden Stan Lee Media and POW Entertainment, are a travelogue of woes brought on by Lee’s has-been creative skills and his desperate urge to keep raking in cash to support his profligate lifestyle. As Reisman acknowledges, the various calumnies and outright felonies committed by the people in Lee’s circle during the final decades of his life deserve a book of their own, but a concise image forms of a man whose greatest product was himself discovering that making oneself a bankable good means that anyone can sell you. Even the most embittered anti-Lee person could only follow in sympathetic pain of the man’s final years, in which his greatest exposure was matched by hellish alleged exploitation by hangers-on and his own daughter, a drain that sapped an already frail old man of any will to live.

The deeper the book moves into Lee’s life, the more one gets the sense that the man genuinely got lost within his own fabulism, that he became guilty of the pro-wrestling phrase of “working yourself into a shoot,” that is to say selling a written narrative so completely that even you ultimately buy the fiction. (Incidentally, Reisman has announced that his next book will be about WWE head Vince McMahon, another undeniable revolutionary in a disreputable industry that he secretly resented but nonetheless exploited.) In the end, “Stan Lee” is perhaps the only successful character that can be 100% attributed to the mind and talents of Stanley Lieber, and it is truly heartbreaking to see how that creation was twisted to suit the needs of con-men and the largest entertainment corporation on Earth. True Believer paints a deeply unflattering portrait of its subject, but at every turn it seeks to understand him, and one is ultimately left feeling as sorry for the man as disgusted by him.