Is it possible that Jean Renoir predicted the Italian neorealism movement? By the mid-’30s, the French director had spent the last decade making a name for himself, churning out more than a film per year, including the critically-lauded La Chienne (1931) and Boudu Saved from Drowning (1932). Exhausted following his 1934 take on Madame Bovary, Renoir elected to retreat from the studio system in Paris and decamped to the South of France to make Toni (1935), filmed entirely on location and featuring a cast of mainly non-actors.

Though the story of Toni is pure melodrama, the film is historically significant as it features immigrants from Spain, Italy and other locales, toiling to make ends meet in the unforgiving country near Marseille. Toni (Charles Blavette), an Italian immigrant, falls for Josefa (Celia Montalván), though he is involved with Maria (Jenny Hélia), the owner of his boardinghouse. Toni is a man of little means, average looks and a quiet disposition. He is drawn to the flirtatious Josefa, setting off a chain of tragic events. 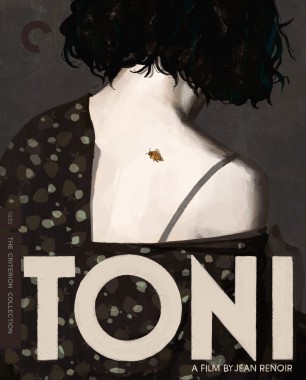 Renoir has long been considered ahead of his time in the liberal point-of-view he takes in his films. There is no judgment here about Toni and Maria sleeping together before marriage. Toni works at a quarry and the one Black character on his crew fits right without any mention of difference. There are, however, some problematic moments in the plot that deal with gender.

Josefa carries a reputation for sleeping around. During an outing early in the film, she and Toni walk through a field when a wasp stings her on the back. She implores Toni to help her and he obliges by removing the stinger and sucking the poison out of her back. This close brush with Josefa’s flesh makes Toni mad with desire and sets out to win her hand. To hell with Maria, he reasons. He is tired of her anyway.

Enter Albert (Max Dalaban), the foreman of the quarry, who also has designs on Josefa. One day, when she is hanging out the laundry, Albert pays her a visit. He knocks down Josefa’s clothesline and then paws at Josefa, making lewd comments. Unable to contain himself, Albert pulls Josefa offscreen, where it is pretty clear that he rapes her. It is unclear whether or not Renoir is punishing Josefa her for her lascivious flirtation or not, but for a film made in the mid-‘30s, Toni is very frank in its use of rape as a key plot point.

Josefa eventually marries Albert and has a child with him, but that doesn’t stop Toni from desiring her, complicating his relationship with Maria, whom he has now married. However, Toni has no idea that Josefa is having an affair with her cousin Gabi (Andrex) who persuades her to steal money from Albert and run off with him. Albert catches her in the act and belts her with a belt, leading Josefa to shoot him. Gabi hits the road and lovesick Toni takes the fall for Josefa.

In the opening credits, card announces, “A True Story Told by Jean Renoir.” The director may have been a bit too enamored in his revolutionary use of an on-location setting, but there is a cinematic truth to the film that would later by exploited for a better use soon in Italy. Though Toni doesn’t scale the heights of Renoir’s best, it is an interesting, and refreshing curio, a full-blooded melodrama of a director getting fresh air and breaking free.