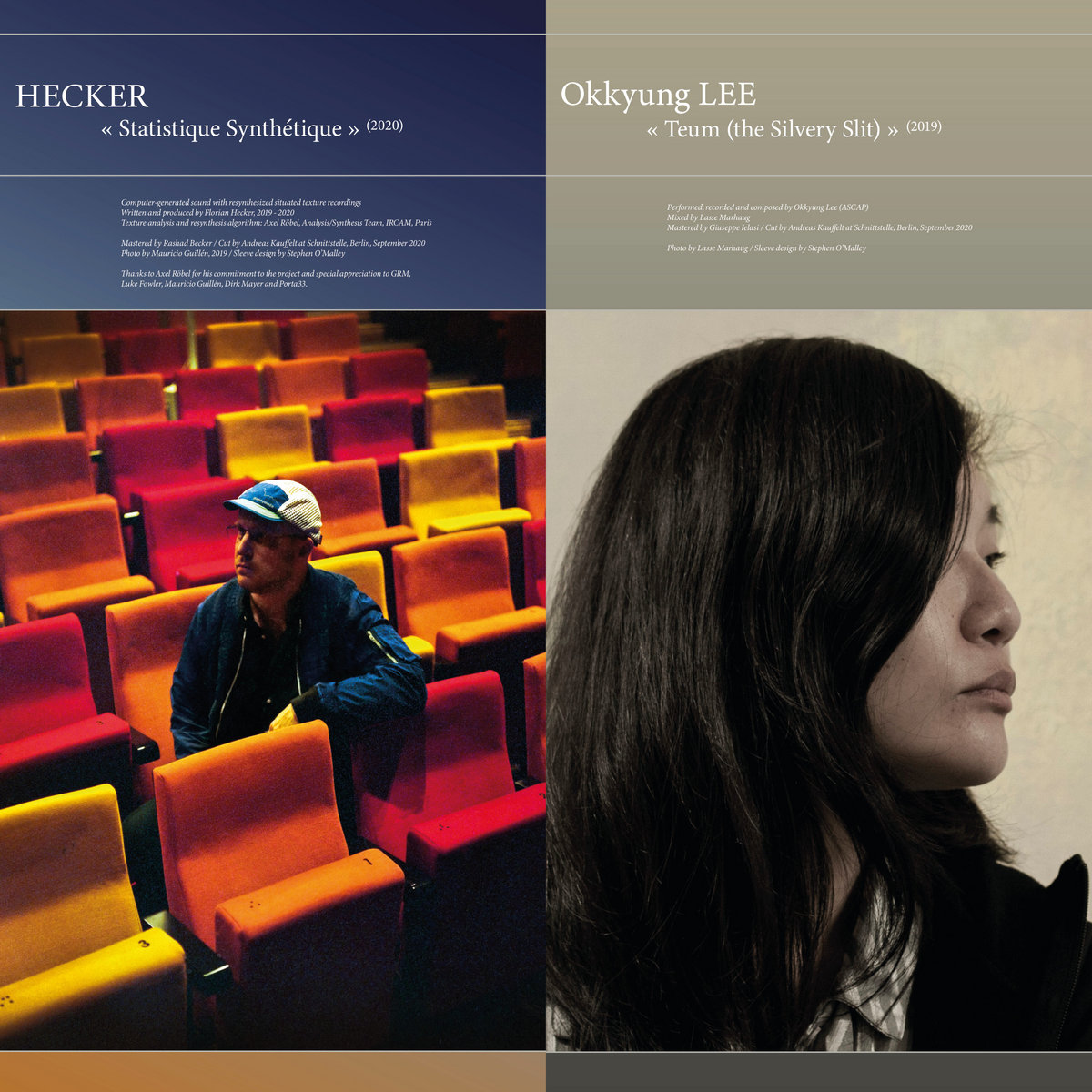 The third release in Editions Mego and INA GRM’s GRM Portraits series pairs two not-terrifically-inspiring pieces by two big names in experimental electronic music: the German producer and computational linguist Florian Hecker and the South Korean-born, Boston-based cellist Okkyung Lee. Hecker’s “Statistique Synthétique” and Lee’s “Teum (The Silvery Slit)” both use computers to process organic sounds past the point of recognition, and they’re both the right length for a side of vinyl, but aside from that they don’t have a whole lot in common. It’s a two-for-the-price-of-one package. If you’re going to listen to them in sequence, listen to “Teum” first, because then it’s a little like getting lost in the woods before disappearing into a sea of fog, but even that image is a bit of a stretch.

Anyone who doubts the existence of distinctions in quality and style in noise music need only listen to a bit of “Statistique Synthétique” and then a little bit of Hecker’s incredible 2009 album Acid in the Style of David Tudor, an album that blurs stone-faced austerity and psychedelic whimsy to the point where that they become thrillingly indistinguishable; it’ll be like The Wizard of Oz blooming into color. “Statistique Synthétique” purports to resynthesize field recordings from all over Europe, but it’s hard to tell until you hear the unadulterated bit of environmental noise at the very end. It progresses predictably and slowly, the sounds are not particularly tactile and it doesn’t work as either brain-trip music or an emotional experience. It just kind of hangs in dead air. (An album that does marvels with European field recordings is Biosphere’s The Hilvarenbeek Recordings, which you should listen to on your next sunny-day walk.)

Lee’s “Teum” is a little more interesting. This is a piece made entirely out of tension, of great weights and pulleys and levers working against each other. The cello is a good instrument for this, producing sound as it does through friction. But the hyper-compressed production shaves away all room noise and resonance until the organic qualities of the cello dissipate and we’re left with little plasticine shavings. It’s like those digital filters you can put on faces that make them look unnaturally smooth, like a seal skin. Lee deserves credit for resisting the trap some experimental musicians fall into where the fact that they’re making all that noise on one instrument is supposed to be impressive: you wouldn’t know it was a cello until a single droning note emerges towards the end. “Teum” could’ve pushed further into psychedelic absurdity, and at 20 minutes it demands a little more time to get its point across, but it’s got a lot of strong ideas.

Editions Mego has put out some of the best laptop music of the last 25 years and deserves credit for fostering collaborations between musicians; albums like The Return of Fenn O’Berg or the Fennesz/Jim O’Rourke collab It’s Hard for Me to Say I’m Sorry are the stuff of electro-geek dreams, even if they tend to fall short of their individual participants’ solo work. The series could be useful in exposing new artists, and indeed the second installment features the promising cellist Lucy Railton, who will feature on PDP III’s Pilled Up on a Couple of Doves next month. But both Hecker and Lee are established enough in the world of electronic music that anyone likely to hear about this album will know who they are – and recognize this isn’t either of their best work.

Criminally Underrated: Pirates of the Caribbean: At World’s End

In this under-loved third installment of the Pirates franchise, the world is so batshit th…