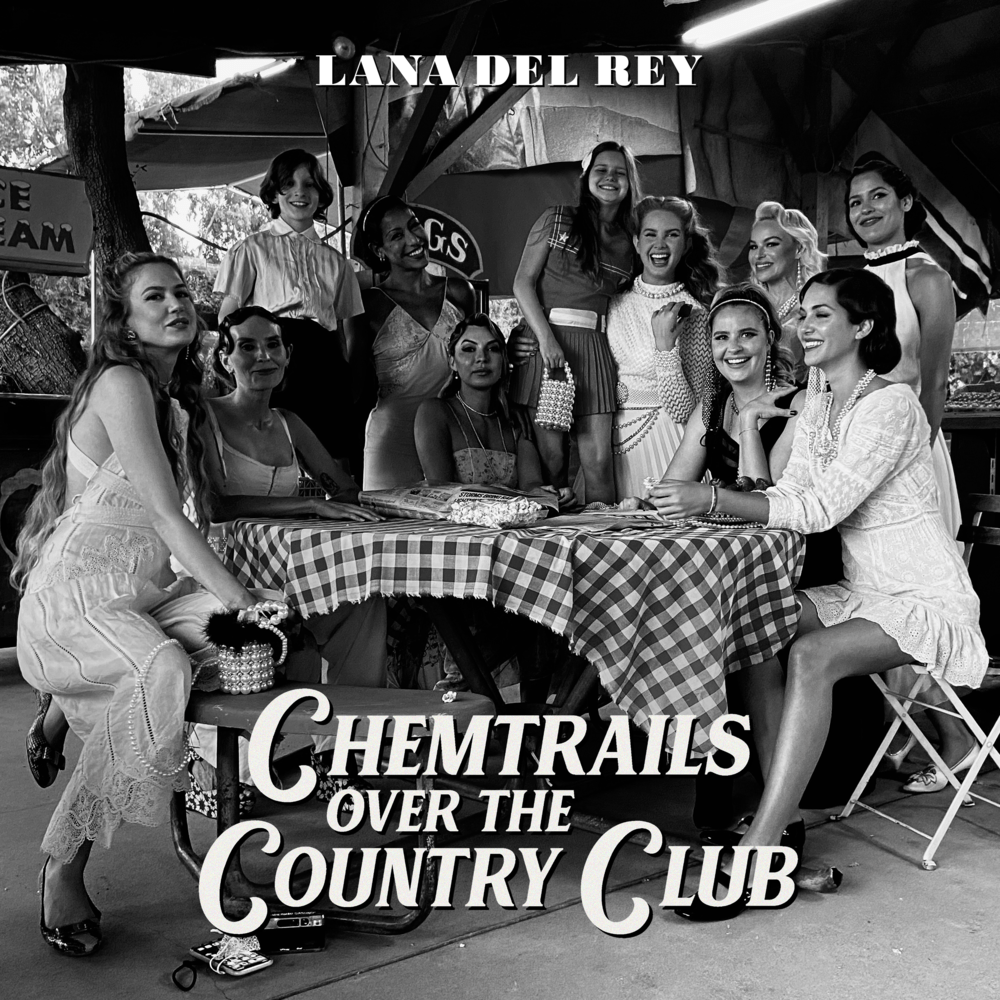 A growing disillusionment with celebrity is one of the central themes on Lana Del Rey’s seventh studio album. It opens with “White Dress,” on which she reminisces about a “simpler time” when she was a 19-year-old waitress. Back then she “wasn’t famous, just listening to Kings of Leon,” but she wonders if “maybe I was better off.” It’s a subject she returns to on closing track “For Free.” A Joni Mitchell cover version, it ruminates on her unease with the spotlight and contrasts how she gigs “if you’ve got the money” with a busker who plays on the sidewalk “real good for free.” Between these two points she sketches out a complicated relationship with success.

On romantic waltz “Wild at Heart” she evokes the death of Princess Diana by observing, “The cameras have flashes/ They cause the car crashes.” She then removes herself from such a danger by ingenuously cooing, “but I’m not a star.” The allusion is repeated with the recurrent phrase “candle in the wind,” the title of Elton John’s tribute to Marilyn Monroe that was re-purposed after Di’s death.

The high price of fame is also addressed on the trip-hop inflected “Dark but Just a Game” on which she laments, “The faces aren’t the same/ But their stories all end tragically […]/ That’s the price of fame.” She could be addressing any one of the young women who’ve suffered mental health problems as a result of media intrusion and an uncaring industry, from Britney Spears to Amy Winehouse and Demi Lovato. She once again distances herself from this gaze by stating, “I’m not unhinged or unhappy/ I’m just wild.”

Taking control of her narrative in this way sidesteps the insular world Lady Gaga created on Artpop, on which her obsession with fame became tired, by expanding her frame of reference beyond her lived experience. In doing so she creates the sisterhood she alluded to in Interview magazine, in which she said much of the album was about her “stunning girlfriends” and “beautiful siblings.”

These glamorous female friends are depicted sitting around a table on the album cover. She defensively pointed out on Instagram that “there are people of colour on this record’s picture,” seemingly in response to criticism she received about her “Question for the Culture” open letter. This wasn’t the best pre-release PR for the album but there is undoubtedly a celebration of women throughout.

Country singer Nikki Lane co-writes and provides guest vocals on the tearful ballad “Breaking up Slowly,” while Arizona rising singer-songwriter Zella Day and Weyes Blood’s Natalie Mering provide beautiful harmonies on the faithful piano-based reading of “For Free.” An artist who’s already adept at referencing brands as part of her American mythology, she namedrops here with great precision as she’s found “dancing with Joan [Baez]/ Stevie [Nicks] is calling on the telephone.”

She’s also taking cues from the country greats when it comes to the bad boys she’s been chasing since she emerged onto the scene in 2011. There are still men with the “Bible on your tattoo” but now she doesn’t “wanna end up like Tammy Wynette” and stand by her man. Breaking up is difficult, she acknowledges, but “it’s the right thing to do.” Sharing vocals with Lane gives the track the solidarity of a best friend offering advice and support through this painful separation.

The names of the classic female singer-songwriters mentioned throughout double as musical reference points. Produced and co-written with Jack Antonoff, who also worked on Norman Fucking Rockwell!, it continues her drift towards Laurel Canyon folk. Soft guitars and bongos create lush but barely there backing. One of the most beautiful examples of this is “Yosemite,” a track she recorded for 2017’s Lust for Life but deemed “too happy” for inclusion.

Her musical guests also indicate a growing interest in country and Americana, which is married on a couple of occasions with her longstanding interest in hip-hop. There are vaguely trip-hop beats and auto-tuning on “Tulsa Jesus Freak,” while the multilayered vocals on many tracks are as likely to create a slightly discordant edge as they are a swell of lush harmonies.

These details highlight the growing sense of lyricism in her songs. The burst of jazzy horns on “Dance Till We Die” brings to life the “Afro-Caribbean two-step” and the strained falsetto she adopts on “White Dress” is a parody of the sexy, breathless female. This adds an ironic edge to narrative that’s presented as personal confession. Yet for every detail that’s definitely true (“I’ve been covering Joni”) or sounds plausible (“My moon’s in Leo/ My Cancer is sun”) there are plenty that seem more interested in creating mythology (there’s no indication that a “Men in Music business conference” ever existed).

Creating a personal mythology is something she’s done since releasing the perfectly formed “Video Games.” Over the years she’s finessed her vision of American arcana with picket fences, femme fatales and Hollywood. This work has attracted intense criticism for its perceived lack of sincerity but that fact speaks more about the sexist expectation that women performers have to be confessional. It also ignores the fact that she’s been true enough to her vision that her name has now become shorthand for a certain style of music.

This worldview is advanced incrementally on the introspective Chemtrails Over the Country Club, adding just enough to sustain interest while being meta in its career-spanning Easter eggs. The music she’s producing “won’t change the world,” as she recently claimed it would, but it does maintain a consistently high-quality control. It’s her third release in as many years, with Rock Candy Sweet already announced as her next album. If she can maintain this strength of writing, her name may yet be spoken alongside the greats she celebrates here.