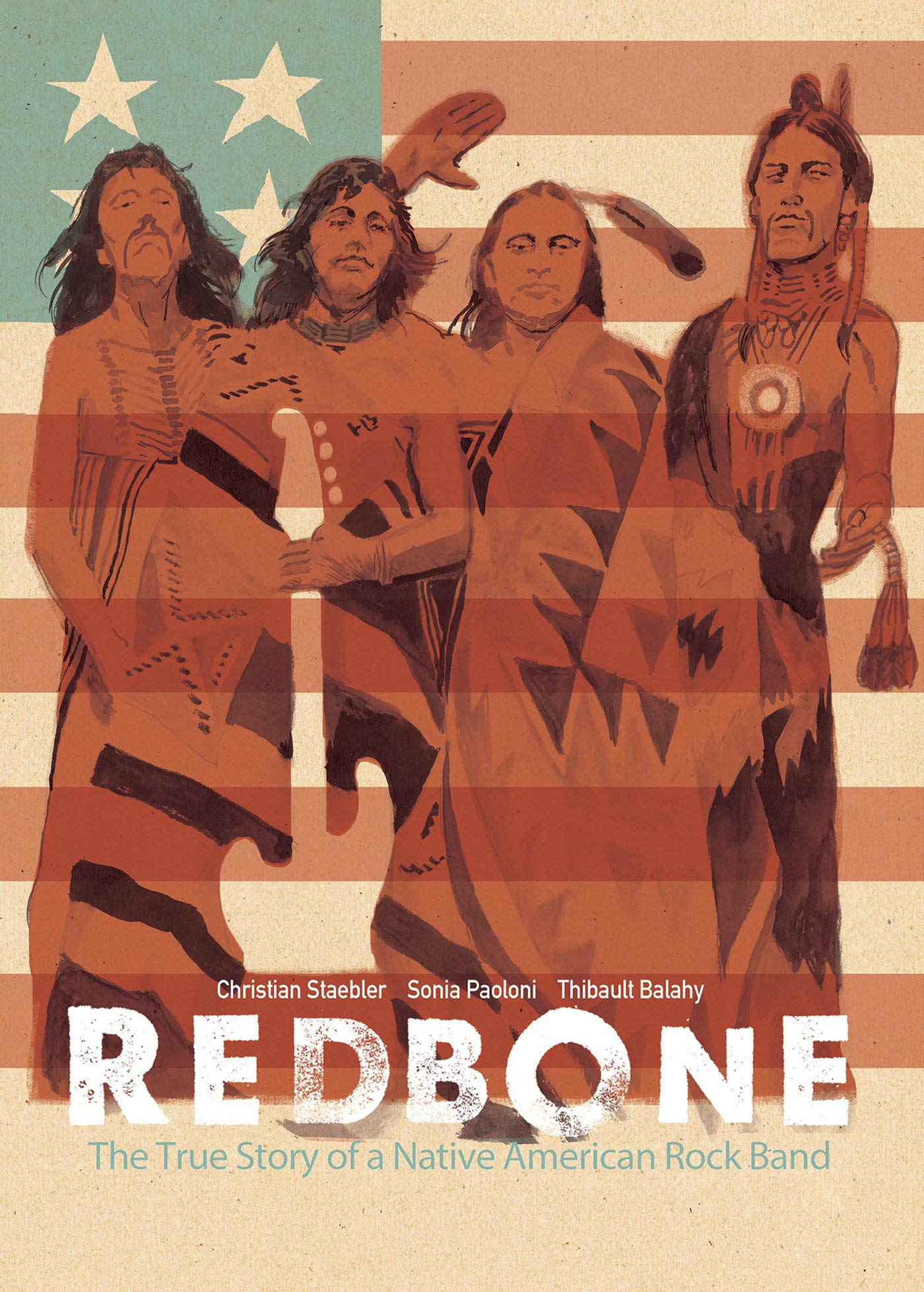 Redbone, to most listeners, remains a one-hit wonder, still riding a resurgence from that one hit, “Come and Get Your Love” being used so well in Guardians of the Galaxy. Redbone, it turns out, had a much more interesting career than their mainstream legacy would suggest. Recent graphic novel biography Redbone: The True Story of a Native American Rock Band seeks to bring the more interesting elements of the group’s life to the fore. Writers Christian Staebler and Sonia Paoloni and illustrator Thibault Balahy highlight Redbone’s work for Native American civil rights, revealing a story that doesn’t obviously connect to the light bit of pop they’re remembered for.

The book tracks the band from its beginnings, noting the need for founding brothers Lolly and Pat Vasquez to change their last name to Vegas. Taking stage names isn’t itself that noteworthy, but the narrative uses the moment as groundwork for much of the group’s career, including the band name, a slang term for a mixed-race person. From that point the pair garner both acclaim (notably from Jimi Hendrix, a minor tidbit that feels overplayed in the band’s mythology) and new members. The biographers trace the band’s maneuvers through the music industry with just enough detail to keep it interesting without bogging down in insider minutiae. We get a few bits of lightness (including a surprising and awkward encounter with Queen Elizabeth II) and enjoy the band’s rise in popularity

The book picks up as Redbone recognizes its political power, talking about the American Indian Movement, the occupation of Alcatraz (which encouraged the band although they didn’t participate) and 1973’s Wounded Knee Occupation. None of these topics are common knowledge, and the book integrates history and biography smoothly, although it could use more details on the band’s specific civil rights work. A strange story arises around the single “We Were All Wounded at Wounded Knee,” which the band had to release themselves, leading to a hit in Europe that was largely suppressed in the US.

That mix of content comes through the book’s framing device, in which Pat Vegas, his daughter Frankie and assorted other people talk through Redbone’s history. It pays off by the end of the book, but at times it feels forced and a little confusing. The art (done in an stylish but sketchy style seemingly endemic to this sort of work) doesn’t entirely help, but the shifts in coloring between the past and present timelines help. The conversations in the present don’t always flow, and while Pat and Frankie make for nice guides, the story itself has enough strength to work with less framing.

That structure aside, the book’s creators accomplish a few worthwhile goals. First, they’ve found an enjoyable way to cast more light on a band that deserves a better legacy than simply providing dance music for Star-Lord. In the process, they’ve personalized the band quite nicely. Second, they’ve drawn attention to the Native American civil rights movement, work that continues to this day and can always use more notice. Finally, their art reminds old and new fans to revisit Redbone’s discography. That catalog contains some deep grooves and swampy funk worth a listen. Maybe the next time the universe needs to be saved, instead of an awesome mix, we’ll just get Wovoka. That seems unlikely, but settling for thinking about social justice set in a good story with a forgotten soundtrack isn’t a bad second best.