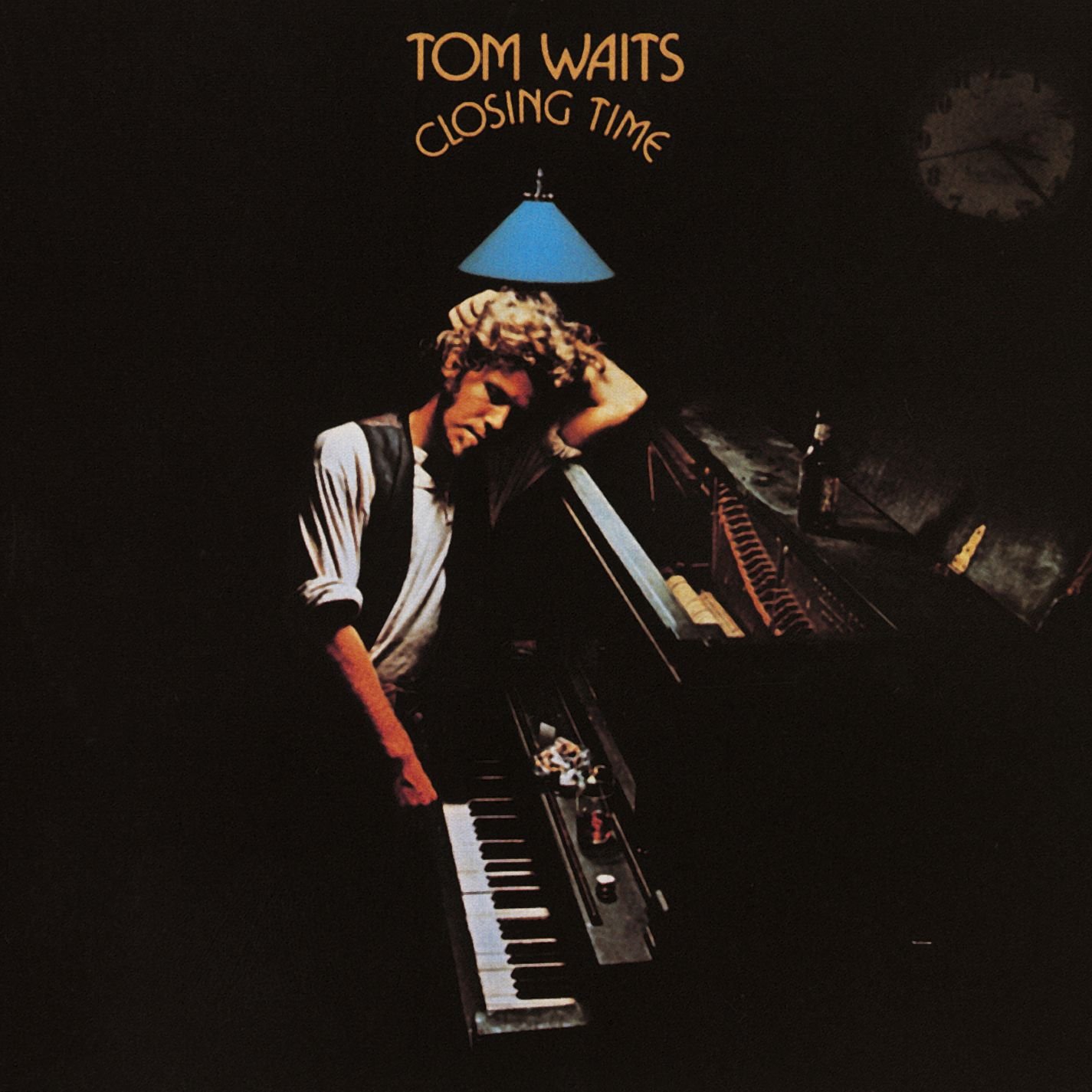 Tom Waits’ 1973 debut Closing Time is an anomaly in the artist’s sprawling, challenging catalog. Released on Asylum, home to the likes of Jackson Browne, the Eagles and myriad other singer-songwriters, the album is very much in keeping with the style of the times with its focus on the singer-songwriter aspect of Waits’ embryonic persona. Nowhere will you find the raspy barks and outré arrangements that came to dominate his sound over the subsequent 40-odd years (emphasis on the “odd”). Instead, this is a straight ahead singer-songwriter album with minimal accompaniment (often just piano, drums, bass, and muted trumpet), allowing the songs and their lyrics to shine through. That he would so quickly stray from this formula shows what a restless creative spirit Waits has been from the get-go. But for one near-perfect album, Tom Waits set himself up to be a songwriter of note; no gimmicks, just great songs.

A lovely piano ballad, “Ol’ 55” is a gorgeous opening statement. It’s also unlike virtually anything else in Waits’ catalog, a straight ahead bit of early ‘70s singer-songwriter fare that has understandably been covered time and again by artists as disparate as the Eagles, Sarah McLachlan and Richie Havens. Regardless, it’s a fine opener for an album that, in the whole of the Waitsian oeuvre, is a strange outlier in terms of accessibility, strength of songwriting and overall level of quality and cohesiveness. Those expecting the Tom Waits of popular culture and legend will be at a bit of a loss from note one.

“I Hope That I Don’t Fall in Love with You”

While the song draws on themes of loneliness and hints at the boho, barfly persona Waits would increasing come to inhabit over the next handful of releases, this is nevertheless straightforward early-‘70s singer-songwriter material common to Waits’ contemporaries at Asylum. As on “Ol’ 55,” a weary sadness underpins both the lyrics and Waits’ delivery, making the final couplet all the more devastating as the song’s narrator finds himself having done exactly what he’d hoped he would not. It offers a somewhat sympathetic portrait of melancholic individuals looking for love in all the wrong places, allowing their loneliness and desperation to drive their actions and perceived emotional connections. An affecting love song at its core, there’s just enough darkness around the edges to fit firmly within the Waitsian canon.

Here Waits begins to venture towards the jazzbo persona he’d come to fully inhabit by decade’s end, delivering a woozy, weary street poetry that sounds and feels cribbed from some forgotten noir. The call-and-response between Waits and Tony Terran’s muted trumpet conjure darkened streets and atmospheric steam pouring out across rain-slicked streets. Aided by a drunken piano line, the song offers a world of visuals that immediately draw the listener into the seedy side of any nameless, faceless big city and the denizens stumbling about therein.

Another anomalous entry in the Waits catalog, “Old Shoes (& Picture Postcards)” sounds more like a John Prine song that just about anything else Waits has written before or since. There’s a decidedly Americana vibe to the track, all high lonesome harmonies and melancholic melodies. It’s also another example of the striking timbre of Waits’ singing voice rather than the Cookie Monster growls and harsh, guttural barks he’s employed since at least the early ‘80s. One only familiar with his latter incarnation would be hard-pressed to correctly identify this track as being from the same artist. Regardless, it’s an exceptional song with a solid hook, just enough twang to sound genuine and not fall into pastiche, and the requisite bit of Waitsian moodiness.

This late-night mood taps the Great American Songbook with its singsong melody and jazz-influenced changes. It’s yet another tender, smokey ballad carried along by Waits’ undeniably pleasant singing voice and Terran’s tasteful trumpet work, the instrument sighing in tandem with Waits’ vocals and helping to perfectly underscore the lyrical sentiments. The closing tag of “Hush Little Baby” hits just the right amount of pathos and wistfulness to remain this side of cloying. It’s a move that shouldn’t work nearly as well as it does, and in lesser hands it would’ve no doubt fallen flat. Here it elevates the song to a whole other level.

One of two name songs which appear back-to-back, this is one of the first great instances of Waits’ skills as a songwriter. Detailing an attempt at rekindling a long-dormant friendship that could’ve once potentially resulted in love, it’s a heartbreaking ballad delivered with the utmost tenderness and world-weariness. It becomes all the more affecting with each passing year. That it contains some of Waits’ most haunting piano melodies certainly doesn’t hurt. “Martha” is an unimpeachable masterpiece of economical songwriting and storytelling conveying a lifetime’s worth of emotions in just under four and a half minutes.

Following in a similar vein as “Martha,” here’s another wistful ballad with hints of Americana and stellar use of melody. The verses sort of float along on Waits’ storytelling and impressionistic, poetic imagery, while the chorus takes everything to the next level, the band surging into the undeniable ear worm of a hook. Though not as quiet or as emotionally devastating as “Martha,” “Rosie” is nonetheless another high-watermark on an album full of them.

This could well have served as the album’s subtitle, each and every track redolent of loneliness and melancholy, the aural approximation of the album’s cover image of Waits sitting at a piano in some undisclosed, darkened (presumably) barroom. Consisting of just voice and piano, the arrangement perfectly personifies the title phrase and makes Waits’ repeated intoning of the word “lonely” resonate again and again.

Opening on a minor key chord progression that carries the sense of loneliness and desperation carried over from “Lonely,” this eventually morphs into something more recognizable of where Waits would end up within a decade or so. That he sings in a sort of nasally rasp as opposed to the more familiar Waitsian bark makes the song all the more surreal when considered within the context of his career. While a fine song on its own, within the context of Closing Time it interrupts the after-hours feel and flow, thus making it a contender for weakest of the bunch.

“Little Trip to Heaven (On the Wings of Your Love)”

Here’s another jazzy ballad pairing Waits with Terran’s muted horn to great effect. Like “Martha,” it’s a mid-tempo number that is both melancholy and nostalgic all at once, making for a gorgeous love song that, again, sounds utterly unlike anything one would think of when considering Tom Waits as he has come to be known and understood within a broader pop cultural context. A truly top-notch love song that deserves to be better recognized and appreciated.

So much of Closing Time rolls along on a similar frequency and set of aesthetic choices that it can be difficult to differentiate between some of the lesser-known numbers without repeated listenings. “Grapefruit Moon” gets lost in that shuffle, sounding very much of a piece with the rest of the album and containing bits and pieces of the preceding tracks in terms of both melody and instrumentation (particularly the strings, which crop of periodically throughout the album). Regardless, it’s yet another heartbreaking bit of Neo-Great American Songbook writing that could easily be covered by any number of artists to great effect.

“Okay, let’s do one for posterity,” Waits can be heard stating as the album closer begins. An instrumental, “Closing Time” seems to take into consideration all of the album’s musical themes and motifs, distilling it all into a bit of cinematic, closing credits-style summation of everything that came before. It’s neither particularly melodically strong nor memorable, yet it nonetheless serves as a perfect encapsulation of Closing Time as a whole and sets the listener up for the easy decision to head straight back to the top of the album and play it again. And again. And again.

At 66 tracks and nearly four hours of music, this collection has plenty to offer those loo…