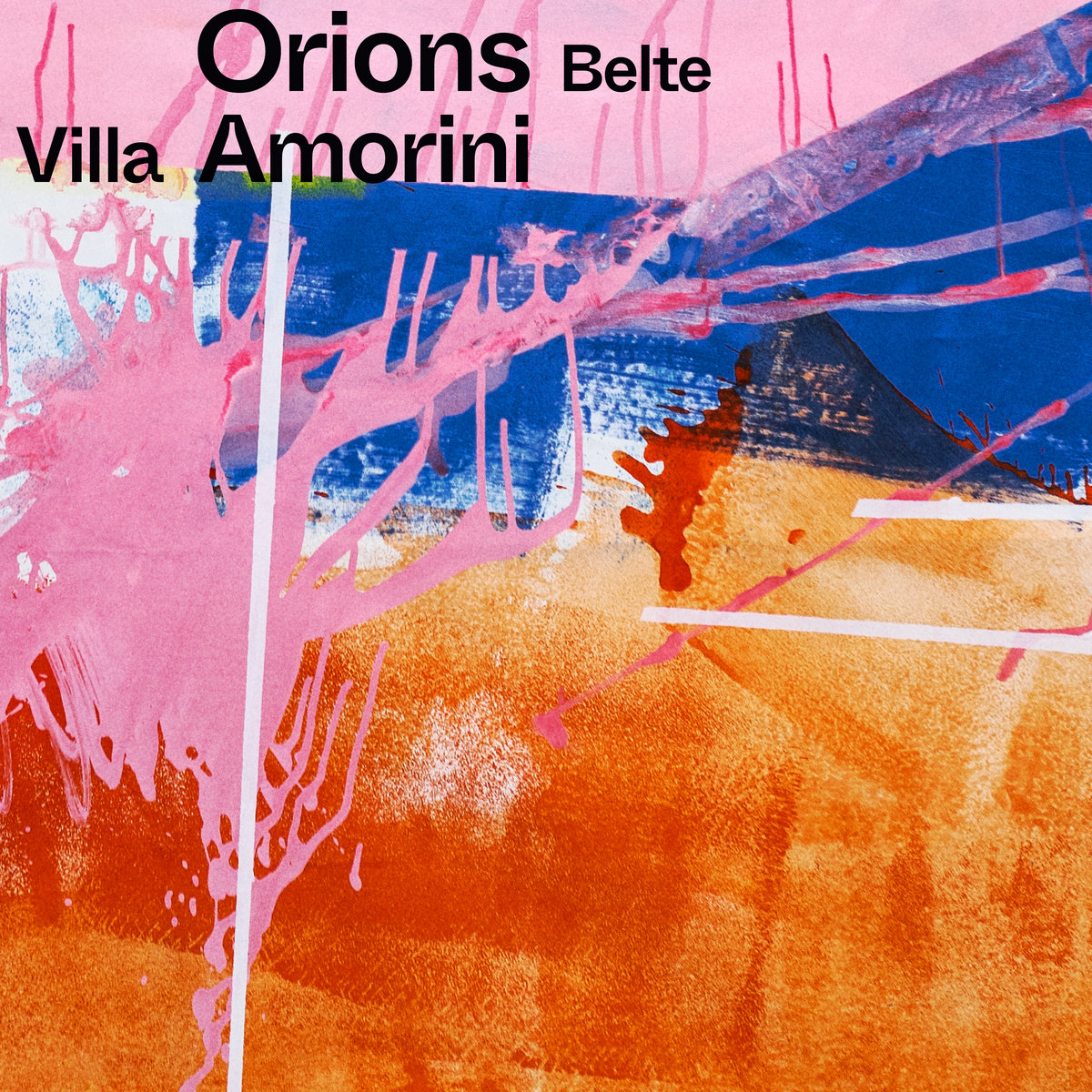 Norwegian experimental (mostly) instrumental group Orions Belte have carved out a niche for themselves over the past few years with a stream of releases that are – for all the good tunes they contain – as much about sound and atmosphere as songs. That sound, shaped by a seemingly disparate set of influences – dub, blues, lounge music, soul, the Nigerian rock of the 1970s, psychedelia – is at once original and familiar; above all, it just sounds right.

Since their superb 2018 album Mint, the band has kept the momentum going with a series of lovely singles, the last two of which, “We Should Stay Like This Forever” and “Conversations” (featuring the vocals of fellow uncategorisable Norwegian artist Shikoswe) appear on Villa Amorini. Most importantly, on the new album their sound remains much as it’s always been; percussive, strangely mellow even at its most rocky, with breezy, summery, reverb-drenched guitars and warm, dub-like bass that is much a lead instrument as anything in the band.

As usual, most of the tracks are instrumental, and the album kicks off with the jazzy, mellow “Bean,” a classic Orions Belte concoction of funky drums and laidback guitar with some lovely understated keyboard elements. It’s smooth, breezy and lighter than air and – like much of their work – could be dismissed as easy listening Muzak, but for the vibrancy that makes it feel fresh. As with Mint, Villa Amorini is a deceptively diverse album which nevertheless feels like a natural whole thanks to the band’s signature sound, but there are differences between the two albums. If the main feel of Mint was a kind of soul/rock hybrid, on Villa Amorini there’s more of a jazz feel at times, although it’s never easily definable.

“Speakeasy” opens with some dramatic Latin-flavoured surf guitar, but unexpected distorted steel-drum-like synths change the mood before the song fades into a sunny haze of reverb. As on Mint, the few songs with vocals blend in beautifully with the instrumental tracks. The nimble lounge-jazz of “Conversations” has a jaunty atmosphere complemented by Shikoswe’s unearthly high vocals while the percussive “how long is…. cold pizza good for” is forceful and Santana-esque, with a strange, circular time signature. Driven by bass and raw and bluesy guitars, it has a tense quality only broken when the languid lead guitar breaks from the tight pattern. The minimal, shimmering vocal passage doesn’t do a huge amount except add another texture, but it’s essentially mood music and the band sustains the atmosphere perfectly.

The almost dub-like bass is to the fore in the gorgeous “Drumstick” which revels in a lazy rhythm, saturated guitars and romantic strings and synths. “Dearest” is perhaps the nearest the album gets to a pop song; though it’s not exactly orthodox. Opening with extremely pretty vibraphone-like sounds and guitars, leading into a verse with straightforwardly romantic lyrics, it’s short and sweet, enlivened by some almost discordant atmospherics as everything vanishes into a mist of reverb.

“Lotus” meanwhile is more dynamic and percussive and taken at a slower pace. Moody, funky and dramatic, with the bass and guitar mirroring each other, it evokes the feel of a ‘70s espionage thriller, with splashes of atmospheric synth adding a cool sparkle to the hot summery guitars. This is the classic Orions Belte sound and while it feels immediately familiar, there’s nothing else quite like it. Drummer/percussionist Kim Åge Furuhaug is the star on “What’s With You?” with its almost hip-hop groove. It’s one of the album’s more minimalist tracks, consisting of a laidback but strangely tense riff, some understated guitar playing and a lot of strange feedback-type noises.

With the lounge-ish “Mouth” we’re immediately in more familiar Orions Belte territory, with a typically mellow tune augmented with what sounds almost like some lovely Bootsy-like bass synth squelching. A little like UK Acid Jazz stalwarts Corduroy, but with dub bass, the less-is-more vocal parts really work here, enhancing the song’s light and wistful mood. The album should really close with the Sunday morning comedown of “We Should Stay Like This Forever” – a fragile, delicate piece of music that starts with just shimmering guitar that feels almost like sad, slow rerun of “Mouth.” Lifted out of the realm of easy listening cheese by some unexpected twists, it drifts on billowing clouds of mellotron and brings the album to a beautifully understated close; except that it doesn’t, because the band ends with “Conversaciones.” A virtually identical rerun of “Conversations” with a different vocal (partly in Spanish, hence the title) by Mexican singer and DJ Pau Sotomayor, it’s all very nice – and neither version is superior to the other – but having both versions makes the album feel a little more samey than it needed to.

For those following Orions Belte’s career, Villa Amorini is more of the same, and up to the high standard they established with Mint. For newcomers, it’s as good a place to start as anywhere – it’s not quite rock, not quite pop, not quite funk, not quite jazz, but very much Orions Belte.