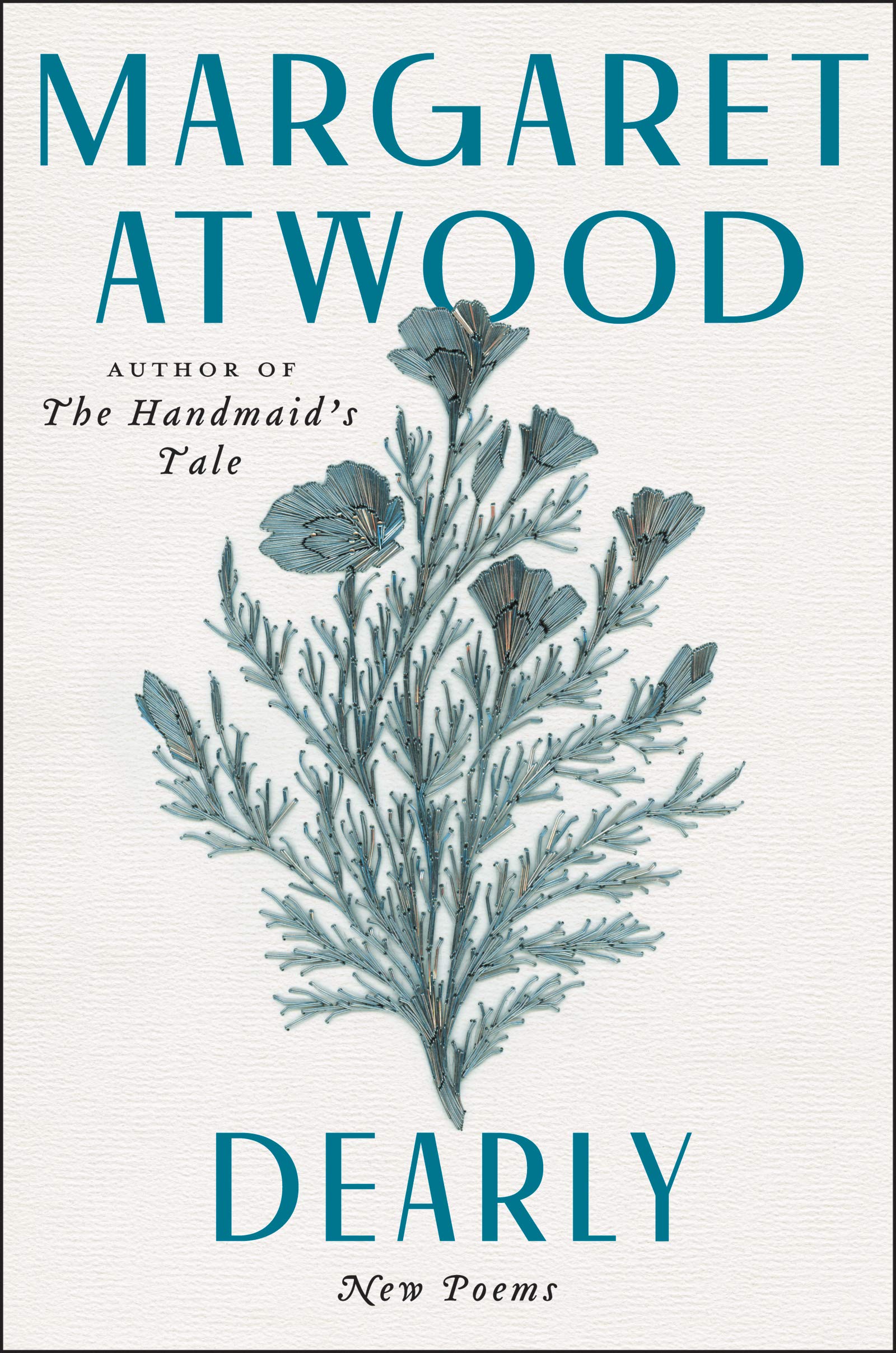 Climate change and environmental destruction have been recurrent themes in Margaret Atwood’s novels, most notably in the Oryx & Crake trilogy. They re-occur in Dearly, the Canadian author’s first collection of poems in over a decade.

It’s no surprise that 60 years of writing about the subject has left Atwood with a fine eye for detailing nature. Leaves “are crisp,/ like antique taffeta” and a cat is “moth-footed,/ owl-eyed.” She’s often less subtle when it comes to decrying human impact on the planet, with a number of pieces reading like sketches or in need of tighter editing.

“Midway Island Albatross” could have been written in direct response to a David Attenborough documentary about the use of plastic: “Inside the barebones/ ribs it’s all bright colour:/ a tag a ribbon/ a failed balloon.” “Whales,” which is also from the “Plasticene Suite,” makes this exercise in responding to news even more explicit: “Everyone cried when they saw it/ in the square blue sea of the TV.”

There can be a similar lack of subtlety in the section that details sex and male violence against women, another recurrent theme in her fiction. The recent Hulu adaptation of The Handmaid’s Tale brought her to a new audience. Yet if the novel had nuance, in these pieces she often spells out the danger too clearly. This is a history in which women can expect “rape, death, death, rape,” and where the vanity of wearing “little glass slippers, the better to totter,” is scorned.

“Songs for Murdered Sisters”, a poem cycle written in tribute to a murdered woman, is more successful in the way it portrays a person and the violence enacted on them through their absence: “Who was my sister/ Is now an empty chair.” This is a motif she returns to when she reflects on mortality, the strongest theme in the book, which highlights the crossover in the language used across the collection.

The work in Dearly was drafted between 2008-19, and Atwood notes in the introduction that during that time, “things got darker in the world. Also, I grew older.” These experiences can be discerned in the collection, which at its best is the work of an author looking down the short lens of her career.

Dedicated “in absentia” to her long-time partner Graeme Gibson, who died in 2019 from dementia, loss and memory loom heavy. Gibson is never named but it’s hard not to imagine it’s him in the “Invisible Man” (“the shape of an absence/ in your place at the table,/sitting across from me,/ eating toast and eggs”) or that his echo is in “Ghost Cat” (“when I go that way […] no matter who I claim I am/ or how I love you,/ turn the key. Bar the window”).

Within these losses Atwood sees her own mortality. In “Passports” she traces her life through, “the procession of wraiths’ photos” and in “Blizzard,” in which she sits by her dying mother, she reflects on “how we’ve all dwindled.” She also muses on a world that’s changing, with language being lost in the process. A Polaroid, she explains to a child, “took the picture and then it came out the top,” and dearly “is an old word, fading now.”

These pieces are often wry and accepting, the lightness of their tone suddenly brought into sharp focus by a killer final line that stays with the reader and makes them look at the world differently. It’s a shame this quality is largely absent in the environmental pieces, a subject about which her natural optimism wanes, but there’s enough of note here to demonstrate a writer who looks at the wisdom that comes of age and laughs, “Fuck that!/ Who needs it anyway?”