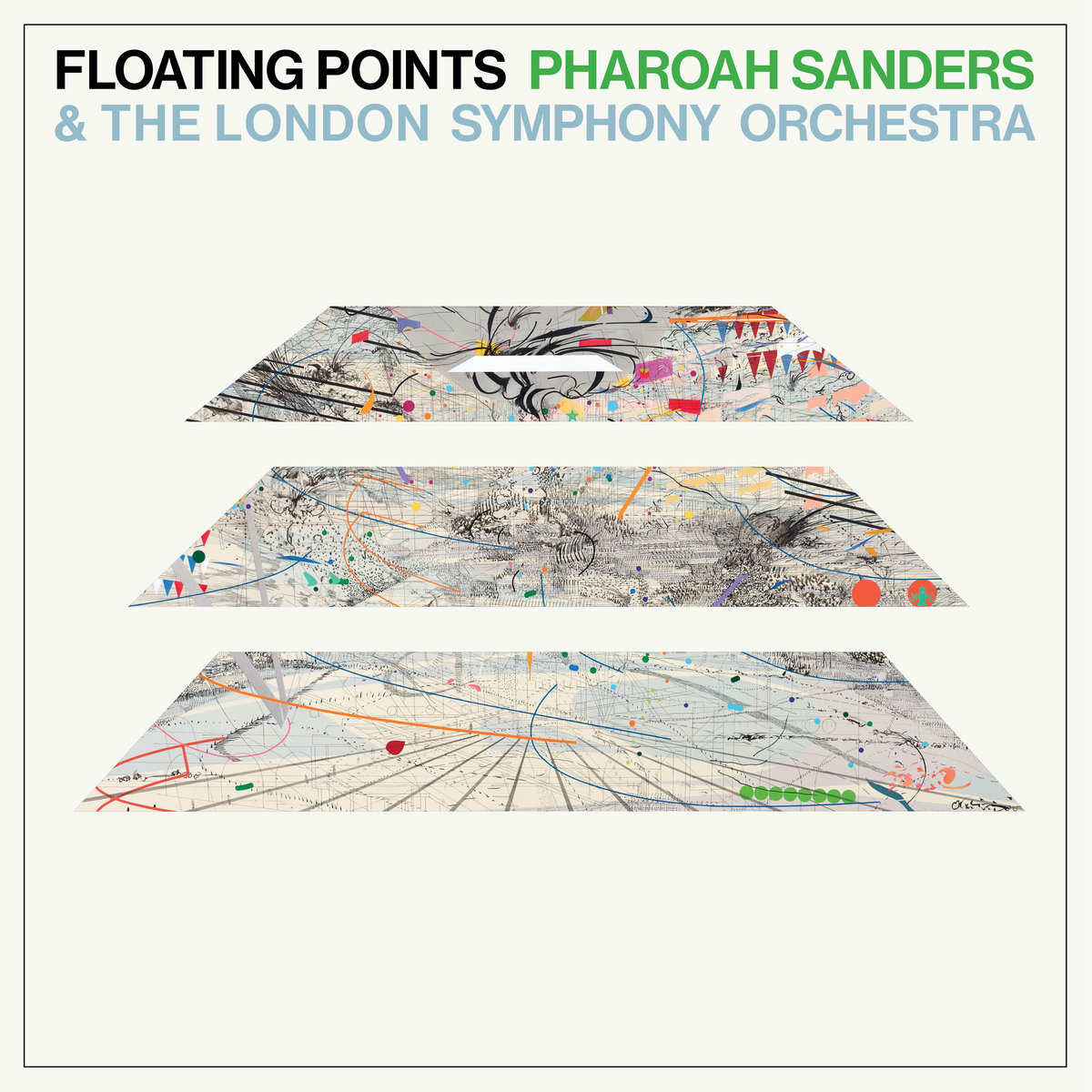 The last thing one might expect from a collaboration between free jazz icon Pharoah Sanders and Manchester neuroscientist-turned-DJ and electronic producer Floating Points (Sam Shepherd) is a sense of continuity. But there it is. As the first of Promises’ nine varied movements wafts from the speakers, it immediately evokes the Pharoah Sanders of the ‘60s and ‘70s; not his early, post-Coltrane work, but the lavish voyages of spiritual jazz discovery he made with Alice Coltrane, the timelessness of 1969’s Jewels of Thought and the textures of Thembi (1971).

The setting is however, quite different. Those records ― even the more transcendental ones ― had their roots in jazz and the African-American experience, but the light, shimmering but not insubstantial ambient tones that Floating Points creates feel like a meeting between the textures of Eno and Philip Glass at his most minimalist, while the orchestral parts are rich and dramatic. Promises is, then, 100% a collaborative piece, but at the same time, it would be unthinkable without Sanders, and it’s hard not to see him as the star of the show. Now in his eighties, Sanders’ tone is fuller and more mellow, but he’s still unmistakeably Pharoah Sanders; the heir of the spiritual jazz of John Coltrane, but with his own inimitable identity. His playing is as probing and exploratory as ever, but it’s also confident and grounded, he’s still taking musical chances, but he knows by now that they will all pay off.

Running at a concise 46 minutes, Promises’ nine movements flow into each other, creating a coherent whole that feels organic but logical, a symphony rather than a collection of tunes. In fact, it’s not always clear where one movement ends and another begins, but the mood subtly modulates throughout. While Sanders’ playing sounds as unfettered as ever, the tightly composed pieces that make up Promises have ― without sounding unoriginal or formulaic ― an immediate sense of familiarity, a mood of nostalgia even. Sanders’ saxophone soars through clouds of warm, nocturnal-sounding melancholy created by the minimalist electronic spangles, voices and subtle orchestration in a way that evokes memory and sadness, lost futures; the film noir of Blade Runner or Terry Gilliam’s Brazil.

Although at times one waits for Sanders to come back in, sometimes the absence of his playing creates its own atmosphere. There’s an achingly beautiful passage around 20 minutes in with just minimal electronic elements and violin (at least it could be a violin, at times it sounds as delicate and voice-like as an erhu) which heralds one of the album’s most lush movements. The electronic elements are subtly used and never jarring, but there are also sections like this one, when Promises is almost entirely an orchestral record. It’s a beautifully scored movement that centers around soaring, dramatic strings that walk the tightrope between lush romanticism and tense drama. It’s filmic, but also a little like the setting for one of Scott Walker’s more sinisterly beautiful pieces. Building tension almost imperceptibly, it reaches a crescendo before ebbing again into minimalist ambient tones, Sanders rejoining with some beautifully limpid playing.

Again, it’s cinema that Promises evokes, this time actual film scores, though presumably not deliberately and in spirit rather than by imitation: Bernard Herrmann’s beautifully tense Taxi Driver and Michael Nyman’s ravishingly romantic Gattaca. Promises never ramps up the drama to the degree that Herrmann did or rivals the classical sense of form in Nyman, but the album somehow manages to seamlessly ebb between both that late-night feeling of low-key tension and desolation and Nyman’s airy, wistful yearning quality. Paradoxically, when the music of Promises is at its most electronic ― as in a strange passage of celestial bubbling, reverberating sounds ― it’s also at its most human, as Sanders’ sax mimics the looped noise to the point of breathlessness, a strangely affecting moment that is unlike anything else in his discography.

Despite the many moments of drama and wonder though, the overarching mood of Promises is warm, reflective, peaceful and full of a kind of piercing melancholy. The emotional power seems to come from a contrast ― though never quite a tension ― between the tightly composed music and the freedom of Sanders’s playing. That sense of composition is important; even when the music is at its most light and abstract, it never feels aimless, and despite the occasional similarity in texture, Promises never has the insubstantial quality of new age music, or an ambient chill-out tape. As the album’s final movement, a short orchestral piece with dramatic, ominous violins, draws to a slightly unsettling, unresolved close, it feels like the end of a journey that was often beautiful but never quite safe.