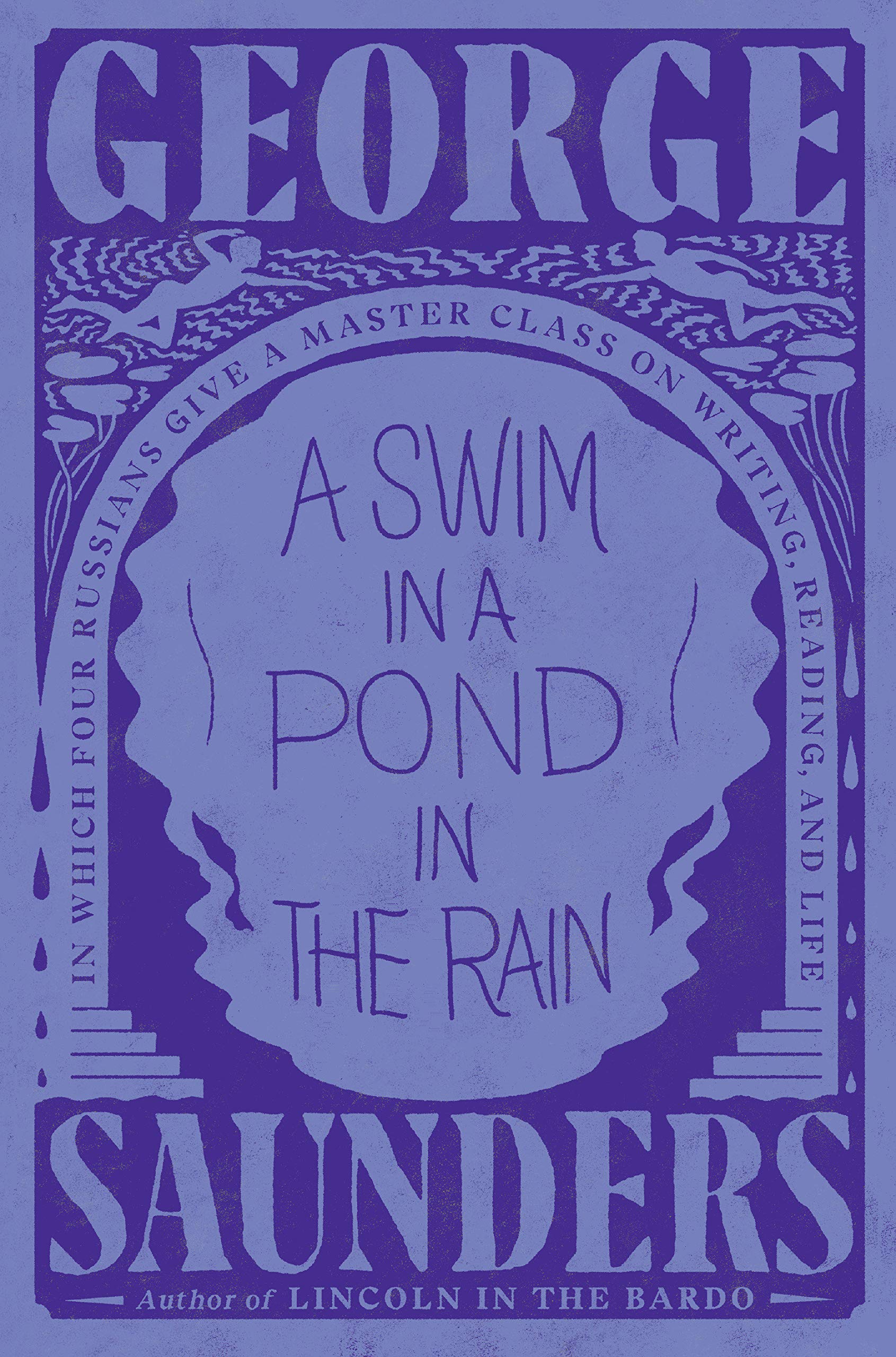 The short story is a tricky bastard. On the one hand, you will often hear it said that no one reads them. Either as discreet units or collected into books, stories are certainly less-read than, say, online articles, or novels. But on the other hand, short stories constitute the lifeblood (or, more crassly, the currency) of what might be called the Fiction Industrial Complex (FIC). That is, the network of MFA writing programs and literary magazines where the form is studied, practiced, published and which has produced a huge number of American writers of fiction over the last few decades. The form is rarely enough to stake a literary career on. Only two prominent counter-examples leap to mind: the Nobel-winning Canadian Alice Munro and the American George Saunders. The latter – something like a kindly uncle of contemporary fiction – has for some years been teaching at Syracuse University a class on “The Russians” that has garnered a near-mythic reputation. In A Swim in a Pond in the Rain, Saunders brings that course to the page, with dire results.

By “The Russians,” Saunders means mostly 19th century writers (though, in the class, he includes some 20th century writers) of short stories from that country. This is far enough back that Saunders doesn’t feel the need to deal with too much historical messiness – though he alludes to the revolution that would sweep the country a few decades after these writers as if he were a director foreshadowing the appearance of a horror-film boogeyman – and thus, these stories float free and unattached from the world in which they were produced.

That is, then, what this book would seem to be about: the short story as a form and how to write it. Saunders approaches these writers with the eye not of a scholar or critic, but of a craftsperson. That word “craft” is important to Saunders and the FIC because it suggests that, like a mechanic or carpenter, the writing of fiction can be systematized and taught. And while Saunders has been teaching for a long time, a book is not a classroom, so – instead – he gives us systems.

There are rules and charts and lists throughout the book. The charts and lists often break the stories under scrutiny into component parts – the action of the plot, or the cross-referencing of a character’s reaction to these events, for instance. But the rules take a broader scope, extracting principles from the seven stories and distilling them into wisdom that one can – presumably – apply to one’s own work. A story is a “system for the transfer of energy,” a “continual system of escalation.” They must be vehicles of verisimilitude, each sentence “a little referendum on truth.” What happens in a story must be “thrilling and non-trivial.” This last one is Saunders’ own spin on a principle given to him by a screenwriter friend.

This all becomes a tautology: a given element in a story is good because it is “efficient,” since these Russian stories are good, every element – no matter how it may appear to us initially – is demonstrative of this efficiency principle. Turgenev has “clumsy” craft. Gogol has “clunky” prose. But what appears at first as clumsy or clunky is revealed to have a higher purpose, to be an expression of exceptional craft, of ruthless efficiency. It’s all a grand spin on Chekhov’s gun, where every word must let loose a bullet or be excised. For Saunders, good art is a “highly organized system” and his rousing defense for such systems runs as follows: “a more highly organized system is just, you know, better.” Life-changing stuff.

This is exactly what A Swim in a Pond in the Rain wants to do: change your life. It is not just about how to write short stories. In fact, in the end it is not even about that at all. Throughout the book, Saunders hedges his instructions, which make writing seem more intentional than it really is, and in the end he confesses that “a lifetime of writing has left me with one thing, the knowledge of how I do it.” That’s fair enough, but begs the question of why he wrote a whole book about the craft of the short story, especially when there is no shortage of these kinds of books. The answer is in the subtitle: “In Which Four Russians Give a Master Class on Writing, Reading, and Life.” That last word is key.

Saunders vacillates between the technical mode and a sentimental one. Amidst the passages of tables and rules are ones that expound mawkishly on the Power of Literature and the story-as-empathy-generator. One need not psychologize Saunders’ personal development from objectivist engineer to Buddhist creative writing professor to see these opposing approaches playing tug-of-war throughout the book, but having abdicated his authority on matters of how to write and read, he stakes his claim on why.

Saunders, having spent so much time among writers and readers, sees “a vast, underground network of goodness at work in the world.” Aside from the craft, he finds himself drawn to the Russians because they “seemed to regard fiction . . . as a vital moral-ethical tool.” Again, we have the language of craft. In these stories, Saunders finds flawed characters with whom the reader is brought into an empathic relation. Chekhov’s lonely Olenka and Tolstoy’s submissive Alyosha are made not less, but more sympathetic through their flaws. In them, we might recognize our own failings, or the failings of our fellow humans and – having internalized these stories – look with more kindness on the world. He asks, “given how generally sweet people are, why is the world so fucked up?” To resolve the tension in that question, Saunders points, again, to stories.

The problem, for Saunders, is that we all have our own internal stories, and some of them make us more kind people and some of them make us more unkind people. Part of writing good fiction is writing fiction that tries to do the former. To do this, you have to understand how stories work and that brings us back to all the talk about craft. One of those craft elements is specificity, the more of which you add, the more interesting your story becomes, and the more interesting your story, the more human(e) its characters.

He even gives us an example. He imagines someone sitting in a room and then someone else walks in. Boring. He revises it to an angry racist man sitting in a room and then a person of another race walks in. There is specificity here, but not enough. Finally, he settles on a racist white guy with cancer sitting in a hospital waiting room when a haughty Pakistani doctor walks in. He gives the characters names and a little more background than that, and then he bails on the story, saying there is enough in the set-up for something interesting to happen, even if he doesn’t know what that will be.

This story is not very interesting at all, though. It’s the most boring kind of reversal: so this guy is a racist, but what if he is having a bad time and also what if the specific guy toward which he directs his bigotry is unpleasant. This is the stuff of op-ed pages, not art. And this begins to get at the problem with positioning empathy as the higher goal of art: it turns everyone into a version of yourself. Saunders asserts that, “everywhere we go, people are (mostly) kind and earnest and seem to believe approximately the same things we do.” But this is blatantly untrue. People may be more or less kind depending on what you look like or where they think you are from. Saunders (like myself) doesn’t usually have to deal with that kind of unkindness.

Yet, it should be obvious to him that people believe all kinds of different, often directly opposed things. The negotiation of these different beliefs in the public sphere might be called politics. Saunders doesn’t want any of that getting spilled on his craft, though, lest it become propaganda. Never mind that, understood a certain way, Turgenev’s hyper-descriptive chronicles of serfdom might be viewed as just that.

A Swim in a Pond in the Rain is a failure on both its practical and philosophical levels. It doesn’t really serve as a useful guide to writing short stories and it doesn’t serve as a good philosophical justification for why one should want to do that. Furthermore, it seems to willfully misunderstand the writers it places on a pedestal, whose lives and stories have the kind of thorny complexity of which Saunders can only work out a pale imitation.

It’s worth stepping out from behind the critical curtain here at the end and admitting that I am part of the Fiction Industrial Complex myself, graduating from an MFA program in a few weeks. Though I think my own philosophy of fiction is different from Saunders’ in some key ways, my participation in this system makes me, on some level, part of the problem.

I coincidentally spent the weeks I was reading this book teaching my first creative writing class, throwing out my own variations on and counters to the rules Saunders gives here, while throwing up my hands more than once and reminding my students that they have to find what works best for them, not what I tell them has worked best for me. As much as I hate the ideology of “craft,” I’m sure I’ve used that word more than once in responding to my students’ work.

But a classroom and a book are different beasts, and in a classroom, your audience can push back at you in a way they cannot push back at a book. In the kind of classroom I try to facilitate, this pushing back is something like the whole point. The persistent complaint against the programmatic fiction that Saunders presents in this book – formulated well by Elif Batuman, among others – has been that if everyone is playing by the same rules, all the writing starts to look the same. While Saunders own stories might resist this criticism, his craft book does not.

What is remarkable about A Swim in a Pond in the Rain is that the stories it holds up as exemplary are vastly different from one another, and remain untamed by Saunders’ rigid schemas and aw-shucks platitudes. If we want contemporary fiction to emulate these Russians at all – an open question, to be sure – than this quality of wild differentiation seems like the best starting point. It takes more than empty-headed empathy to do that. It takes struggle, digression, arguments and, yes, even politics.

This push and pull between creative players is present on every track, but “push and pull”…