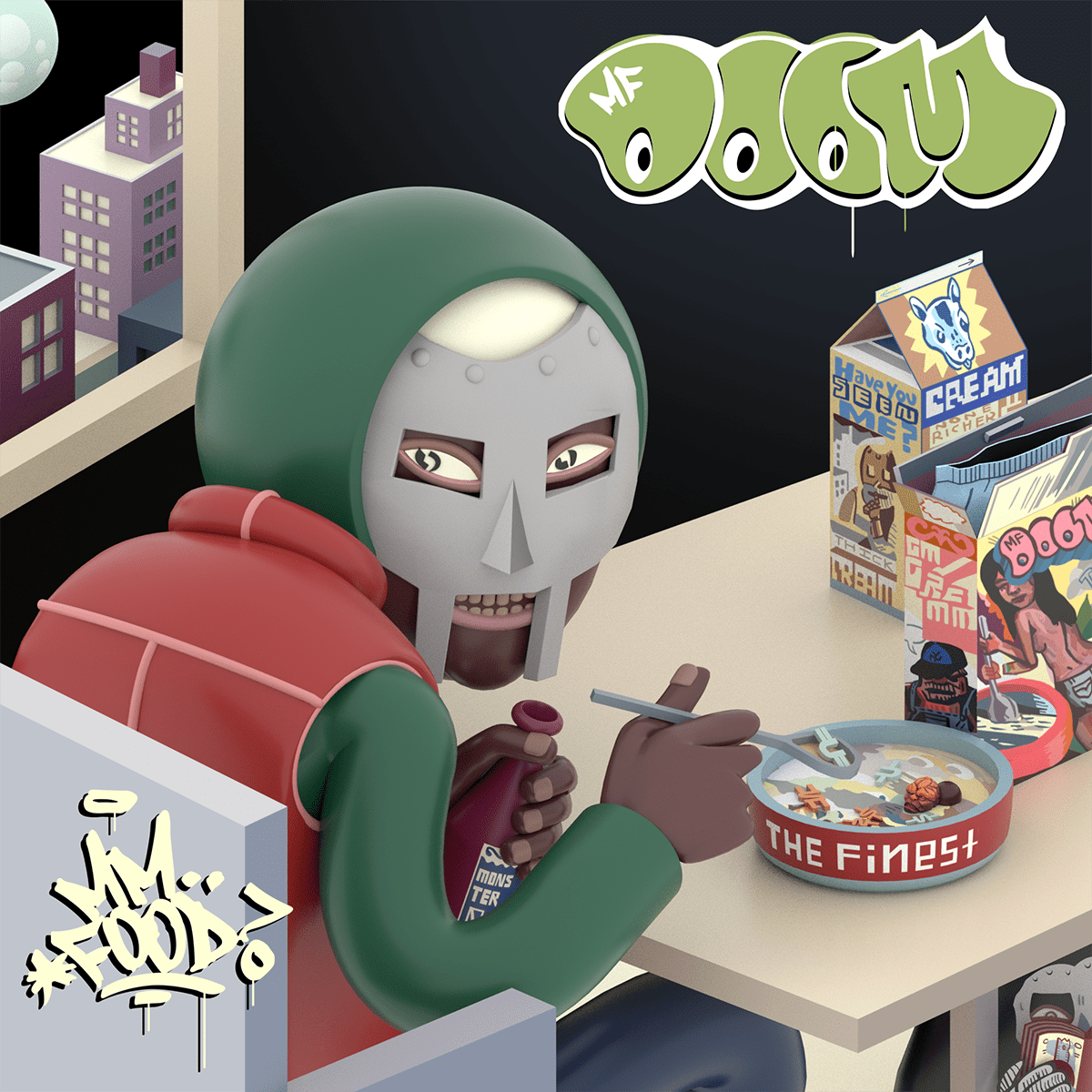 Rap is a form that may always be dominated by a connection to physical goods. This is a truth embedded in the cliches that your boomer dad still embraces when misunderstanding rap as a whole: there’s money, and gold, and clothes, and cars, and houses and — if you’re a little on the nerdier side — actual, physical records. We aren’t going to get into the why of it: that’s someone else’s article to write. Most joyfully, it results in excellent imagery — which is, of course, what happens when acts like Gucci Mane or Clipse write about the things they covet. But what’s most interesting about MM..Food, MF Doom’s second album under the banner, is that it seems less interested in all of those things, and more focused on what really matters: food, of course.

Dropped just a few months after putting out the uneven Venomous Villain under the Vikor Vaughn moniker, MM..Food (an anagram for “M.F. Doom”) is Doom’s sixth album, but his first since Operation: Doomsday under his own name and alone. And by “alone,” we aren’t far off from reality: unlike the feature-loving Doomsday, just four guests (and three guest producers) show up on three different songs here: MF Grimm associate Count D Bass takes double-duty by rapping and producing “Potholderz”; Angelika (otherwise known as Empress staHHr, who was last seen on King Geedorah’s “Next Levels” on Take Me to Your Leader) and 4ize trade verses on “Guinnesses”; and the incomparable Mr. Fantastik turns up for the totally-perfect “Rapp Snitch Knishes.” Oh, and Madlib and Moleman member PNS produce “One Beer” and “Kon Queso,” respectively. The guest list for this dinner party is staggeringly short, but every single one of them is a fascinating addition in their own way.

What that means is that, for the lion’s share of MM..Food, Doom is left to his own devices, free to rage through these spaces exactly how he sees fit. As such, the album is a bizarre, entirely idiosyncratic journey, and one that goes down a little less easily than Doomsday. The simple fact that each song is based on the general concept of food and eating (like a hip-hop version of Cibo Matto’s similarly-themed debut album Viva! La Woman) is strange enough, and it’s excellent that he manages to keep it tasting fresh from start to finish. It’s packed with extra-weird samples and has a four-part series of songs that are just Doom flexing how damn good he is at sound collages, built around samples of Euell Gibbons parodies and Fat Albert holiday specials. You can’t even skip past the skit that opens the album in order to get to the murky “Beef Rap,” because they share a track. It’s awesome, and every single listen is endlessly rewarding — but it’s really the first “grower” he’s made, so the first few listens can feel a bit difficult.

The villain didn’t necessarily have anything to prove here in the same way he did the last time he used his name; Doomsday and the Madlib team-up Madvillainy are bulletproof, and the trio of King Geedorah and Viktor Vaughn albums are each fantastic in their own ways. And so, MF..Food turns out to be less about proving his skills, and more displaying his own creativity, and the record is simply less easily-digestible than his solo debut was. Few of these songs feel like “hits” like “Rhymes Like Dimes” or “Accordion.” That also goes for the one true hit here, “Rapp Snitch Knishes,” and a lot of what makes it feel that way is the blinding charisma of Mr. Fantastik doing the heavy lifting. Still, those raps would be nothing without the Technicolor soul/funk beats, courtesy of the mask himself, that run through the track.

It goes without saying that, in terms of rapping, Doom is… well, he’s MF Doom. His rhymes are intoxicating, as always. How can you not love that he rhymes “baboon” and “stab wound” on “Deep Fried Frenz,” or the labyrinthine opening of “Kon Karne”: “Darker than the East River, larger than the Empire State/ Where the beast who guard the barbed wire gate/ Is on the job—not my fate, tired of the wait/ ‘Til the Villain bring deliverance from the dire straits”? He’s just as funny as ever, writing lines like “Her bra smell, his card say, ‘Aw Hell!’/ Barred from all bars and kicked out the Carvel/ Keep a cooker where the jar fell/ And keep a cheap hooker that’s off the hook like Ma Bell” and clumsily singing Cole Porter’s “I Get a Kick Out of You” at the top of “One Beer.” MM..Food isn’t really about reinventing MF Doom The Rapper — he’s at the top of his game, but he was always at the top of his game, and paragraphs documenting every remarkable rhyme and classic verse could be written for every one of his albums. That element is exquisite, but it isn’t quite what makes the album so interesting. The really interesting part is the interplay between MF Doom The Rapper and MF Doom The Producer.

There isn’t anything unique about the fact that Doom produces many of his own songs. With some artists, though, it feels like the production is an aspect that takes a backseat to, y’know, the rapping, or vice versa. But Doom isn’t like that. Throughout the first half of the new millennium, he was steadily releasing volumes in the instrumental Special Herbs series — and Take Me to Your Leader showed us a willingness to hold these twin pursuits on the forefront of the music. Every single album feels like a gradual progression of form — he doesn’t know how not to reinvent himself, even when those changes are small. And so MM..Food showed us Doom adapting this habit for the big show – and that desire to control and elevate all aspects shines through on every. single. song. These songs are as fun to listen to for the way they move and operate as they are for how he’s going to deliver every song. It doesn’t matter that these songs aren’t as easily-digested as his debut — the flavors are more intriguing and more complex, so the payoff is equally as high.

Sadly, MM..Food would be the last solo album from the villain for five years — we’d see him just one more time before he entered a years-long period of near hibernation, presenting us with a collaboration made with one of the early aughts’ most intriguing producers and a gaggle of cartoon characters far more modern than he’s used to sampling. We’ll tackle that record later, of course, but MM..Food is a grand feast for the senses, richly packed with excellent lyrics and enough irresistible beats to make a pot of borscht. It’s hard to know if the aforementioned hibernation was intentional, but even if it wasn’t, he gave us more than enough to sink our teeth into and satisfy our appetites until his third — and final — totally different and equally spectacular solo album.