May 09, 2021
Home Features Rediscover: The Comfort of Strangers

The Comfort of Strangers is a fascinating disaster. The 1990 film certainly had the pedigree of a classic. An acclaimed director (Paul Schrader) working a screenplay written by a vaunted playwright (Harold Pinter) based on a book by an acclaimed novelist (Ian McEwan). Christopher Walken, Natasha Richardson, Rupert Everett and Helen Mirren are each an excellent actor in their own right. Schrader, perhaps best-known for writing Taxi Driver and Raging Bull, even had the benefit of Venice loaning its gloriously creepy gifts to cinematographer Dante Spinotti, as well as a score by Angelo Badalamenti, hot off his work for “Twin Peaks.” So why does The Comfort of Strangers not function as a good movie?

Part of the problem is the existence of Don’t Look Now, Nicolas Roeg’s moody 1973 masterpiece. Yes, more than one movie can take place in Venice, but there are too many other parallels between The Comfort of Strangers and Don’t Look Now that make it impossible to view the former on its own merits. Both films involve a couple adrift who travel to Venice to rekindle a sputtering romance. In Don’t Look Now, the motivation is more dire: a husband and wife have lost a young child to tragedy. In The Comfort of Strangers, it’s a vapid, unmarried couple pondering what to do next in a romance that has fizzled. 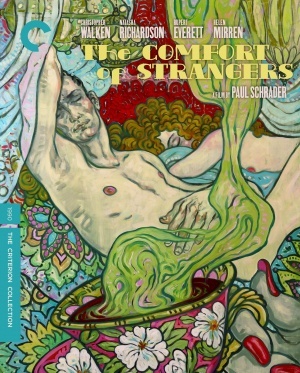 Mary (Richardson) is divorced with children. She and Colin (Everett) have been together for some time but he is unwilling to commit to marriage. Colin is built like a Roman statue and it is evident that Mary is terrified that he is no longer interested. She prostrates herself in front of him, asking if he likes her children, tries to lure him with sex, tells a humiliating story from her past in a veiled attempt to beg Colin not to reject her. He seems coolly indifferent. He likes things the way they are.

Colin and Mary spend much of the first section of the film strolling about a seemingly deserted Venice. Though Spinotti captures the city’s canals, twisted streets and Saint Mark’s Basilica in exquisite detail, his work is missing the creeping, rotting grandeur that Anthony B. Richmond allows to seep into his work on Don’t Look Now. Of course, danger is unthinkable for a couple as affluent and attractive as Mary and Colin, but it soon appears in the form of Robert (Walken), a sinister man in a white suit who stalks the couple. We actually see Robert in the beginning of the film, as he tells a story about his father’s masculinity, which we will hear about numerous times.

Robert will eventually befriend the couple and Colin will learn of the man’s bankrupt morality. Robert idolizes the chauvinistic philosophies of his father and grandfather. He believes that men exist to keep women in their place. His own wife, Caroline (Mirren), seems to never leave the couple’s palatial apartment. Yet Robert seems to be sexually attracted to Colin and lures the British couple to a bar (his own) with promises of authentic Italian food. When there is no food to be found – and the establishment certainly presents as a gay bar – Robert gets the couple drunk on wine leading them to stagger out into the night where, after getting lost, they sleep in the street.

The next morning, Robert finds Colin and Mary again and invites them back to his apartment. There, they sleep naked while Caroline takes their clothes, under the guise of washing them. For some reason, waking up naked in a stranger’s house with one’s clothes missing isn’t a red flag. Instead, it triggers a sexual awakening between Colin and Mary. A thaw in the ice. Things seem to be going well.

But the trap Robert and Caroline have set for Colin and Mary feeds on the couple’s inability to see meanness in the world. They are afforded numerous opportunities to escape Robert’s vise, but their naiveté sets them on a course for disaster. Rather than run away from the increasing strangeness and volatility, Colin and Mary continue to walk right into it. And why? Because they figure it would be rude not to pass on the perceived hospitality.

The Comfort of Strangers is ultimately a head scratching misuse of so much talent, yet it’s difficult to place blame squarely on one party. By the time the movie lurches towards its bizarre finale, it’s difficult to care about what happens to Colin and Mary. They have been seduced by the comfort of strangers and despite seeing all the warning signs, they are still willing to step closer and closer still.