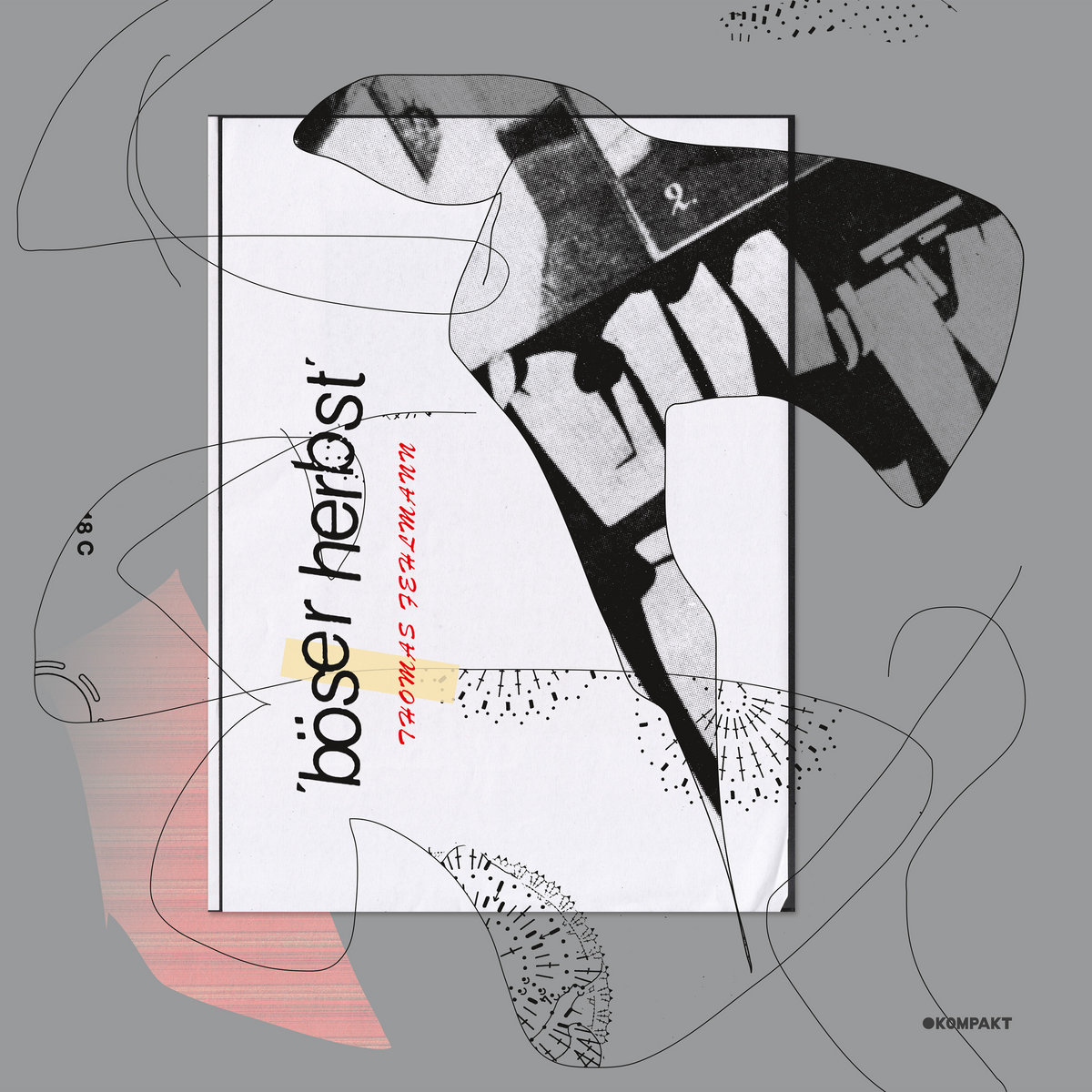 Böser Herbst follows on from Thomas Fehlmann’s 2018 album 1929 – Das Jahr Babylon, which also happens to be the soundtrack to a documentary about Berlin by Volker Heise. By this point, Fehlmann has over 40 years of wildly varied music under his belt, even within the ambient realm, but although he promises an album imbued with the “dirt and dust of original 1920s archive sound,“ a fair amount of the album (whose title translates to “bad autumn”) is the “staring at a grey sky waiting for something to happen” type of ambient record. That said, when the dirt and dust does come across, it really comes to life, and the album contains some magnificently evocative pieces.

For its first half – no doubt because of its genesis as a soundtrack – the album is all but abstract. It’s more or less musical, rather than being harsh noise, but it often consists of monotonous textures and tones rather than anything approaching a melody. Hypnotic opener “Vergessen” is a typical example. A kind of musical pulse, it’s quite evocative as sound; with its faint, wind-like hissing, flickering piano-like instrument sound and gradually intruding beat, it’s like watching dappling patterns of light or drips falling into water and no doubt works beautifully in the context of the show. “Karnickel” is similar, a looped second or so of an unidentifiable instrument with subtly fluctuating background tones gradually building and acquiring a kind of celestial aura (possibly strings?), it’s pretty and atmospheric, even if the atmosphere it creates is hard to define. “Mit Ausblick” sounds as though it was built out of scraps of background noise, perhaps including voices, and it pulses at a slower tempo with at times slightly sinister overtones. Again, it’s more or less noise, rather than music, not exactly harsh but not mellow either, until a recurring kind of angelic note enters the cycle halfway through and softens the mood.

It’s not until “Umarmt” that Böser Herbst steps up a gear, and even that is really an illusion caused by the more melodic nature of the sample that has been looped to create the song’s pulsating heart. As the piece evolves, a kind of percussive noise creates a beat and it ends up sounding a little like one of the more minimalist songs from albums by projects at the accessible, dance-ambient end of Fehlmann’s discography, like The Orb or FFWD. The FFWD feel is even stronger on “Abgestellt,” where what sounds like the hiss of a gramophone turntable becomes the base sound for a tense and understatedly dramatic piece punctuated by staccato percussion. By this point, approximately halfway through the album, it feels like Böser Herbst has settled into a pattern which it’s going to stick with, but although that’s not an entirely false impression, the album does become far more engaging in its final quarter.

Throughout the album, lesser tracks like “Vulkan” are almost frustratingly enigmatic, because the snippets used and looped – with the grit and dust of the ‘20s that Fehlmann promises – are such tiny fragments that only the slightest ghost of those fascinating noises and textures is preserved. These pieces too, mostly follow a pattern that begins to feel a little generic and aimless; a sound is found, looped, added to with layers of ambient tones and texture, then it ends. Because there’s little melodic variation, the end result – when listened to – and it’s probably fair to assume that Böser Herbst by its nature was not really envisioned as a listening experience that would receive undivided attention – can be a bit dull.

On the plus side, Fehlmann is a master at assembling significant, evocative elements and building them into seamless and immersive soundscapes and even the most apparently featureless pieces have more to them than initially meets the ear. At its best, the album is outstanding; the strangely textured, clockwork-sounding march-tempo “Auf Die Spitze” is eerily intriguing, timeless, alien and yet familiar and human. Similarly, “Freche Freunde,” with its feel of mystery and hint of actual jazz tones, is far more evocative and engaging than the more abstract pieces, and an album made entirely of these kinds of tunes would have been up there with Fehlmann’s best work.

Listeners familiar with 1929 – Das Jahr Babylon – or indeed much of Fehlmann’s other work – will know what to expect: a virtuoso display of aural cut-and-paste surgery, mood building and emotionally resonant noise. But although it no doubt functions perfectly as the soundtrack it was created to be, ultimately Böser Herbst as an album is an uneven experience with some flashes of brilliance amid a slightly featureless sonic landscape.